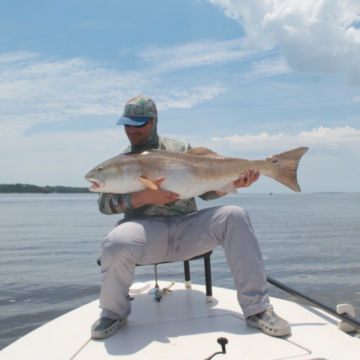 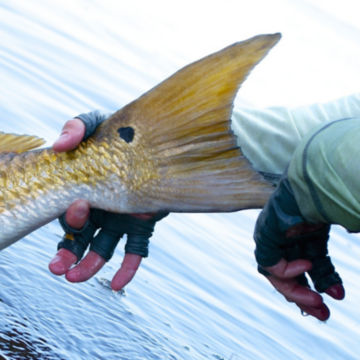 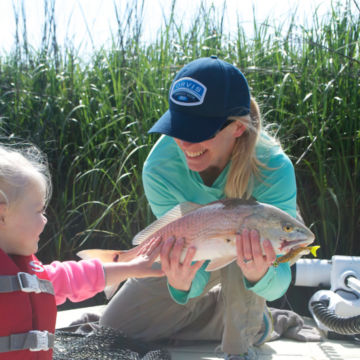 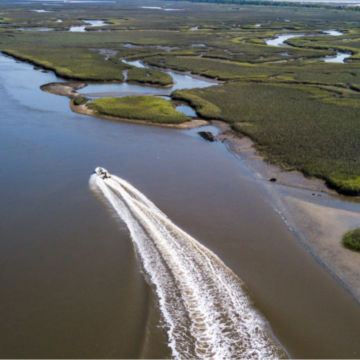 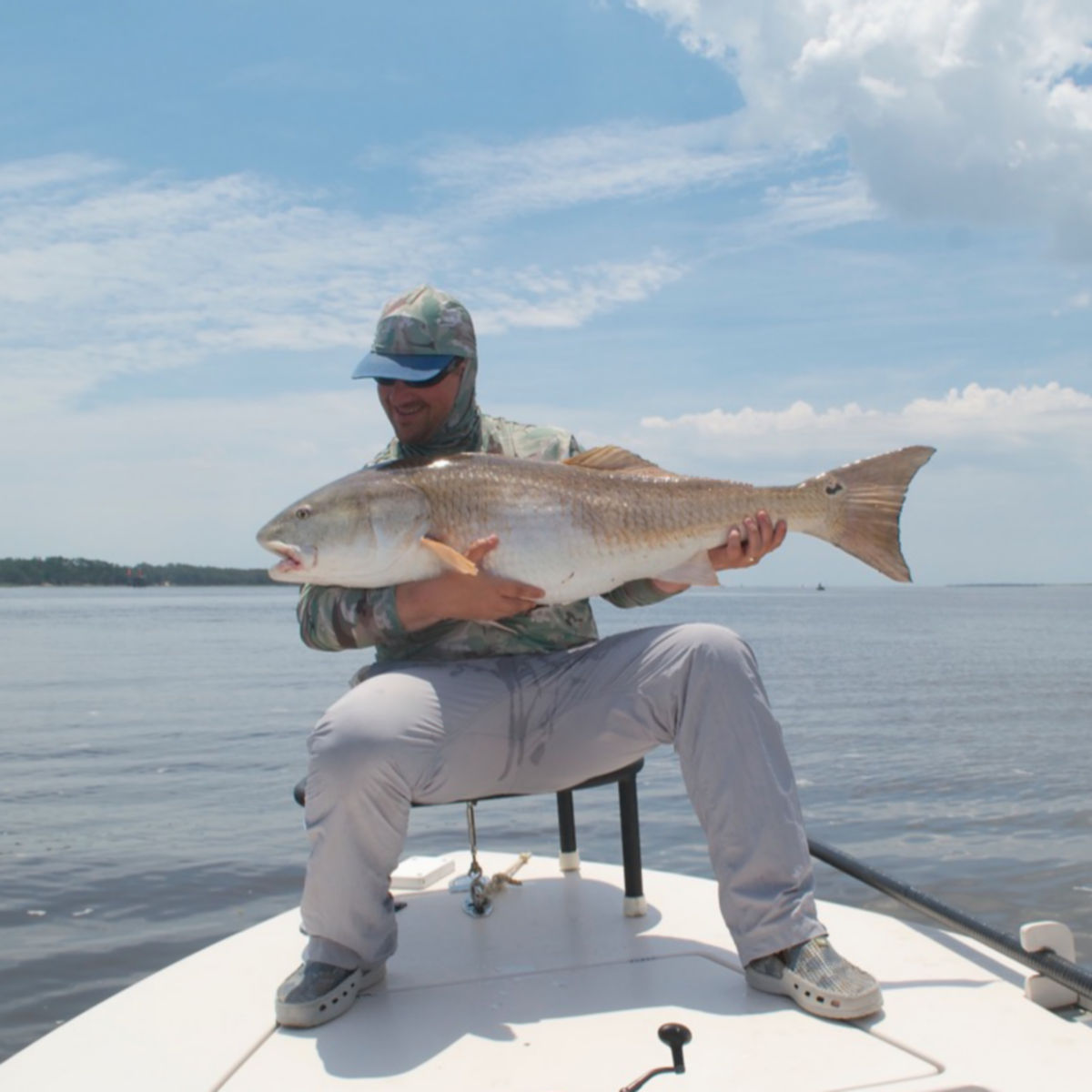 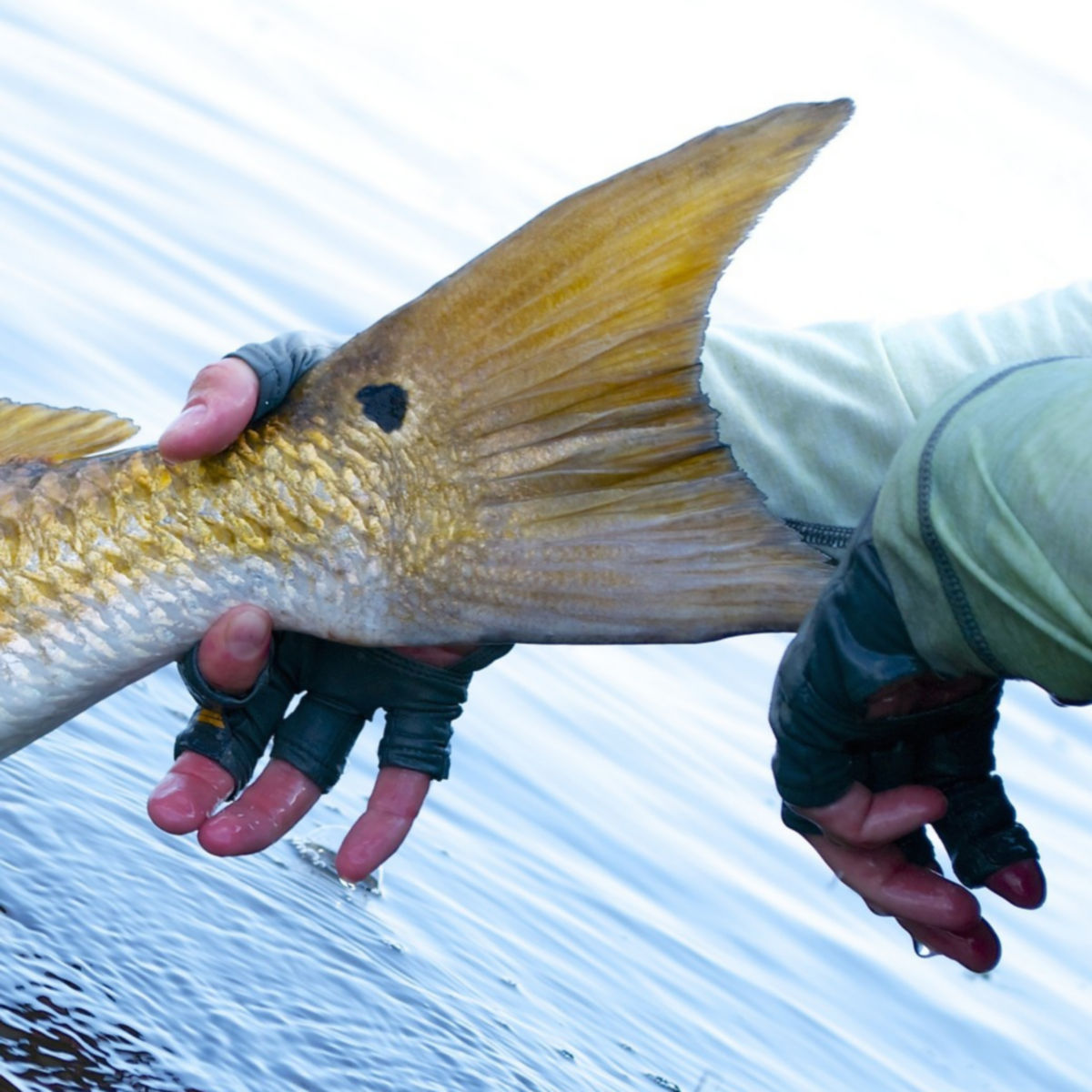 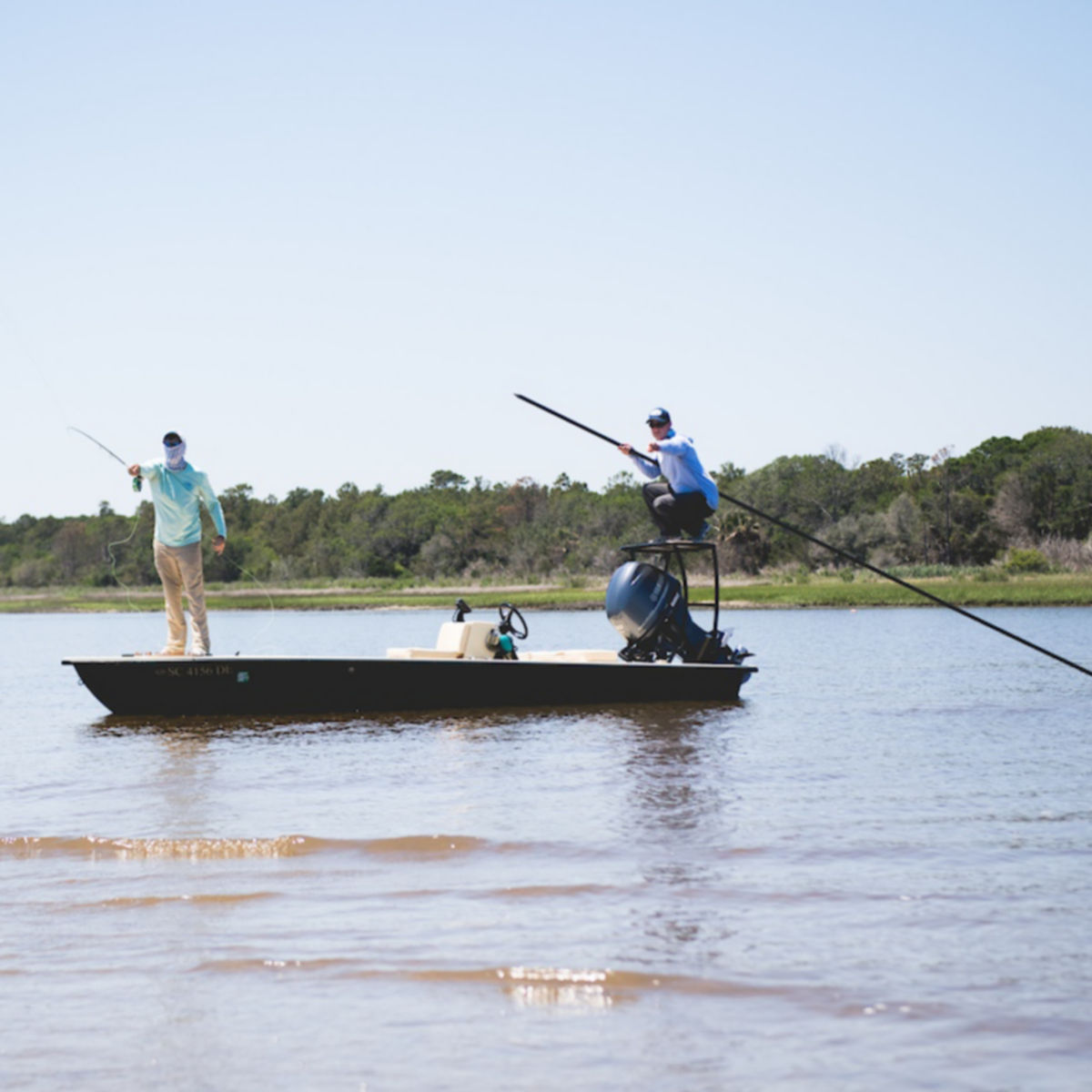 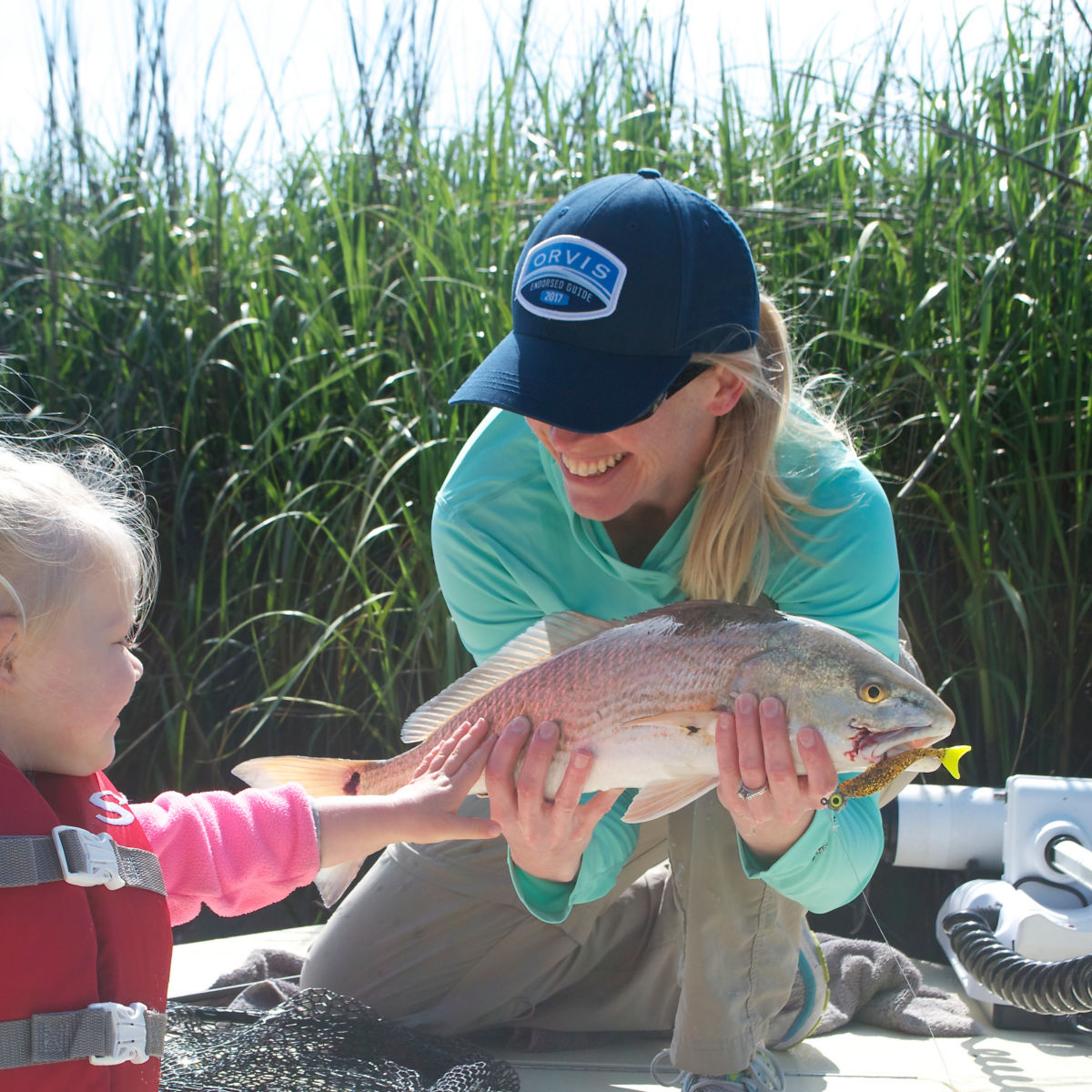 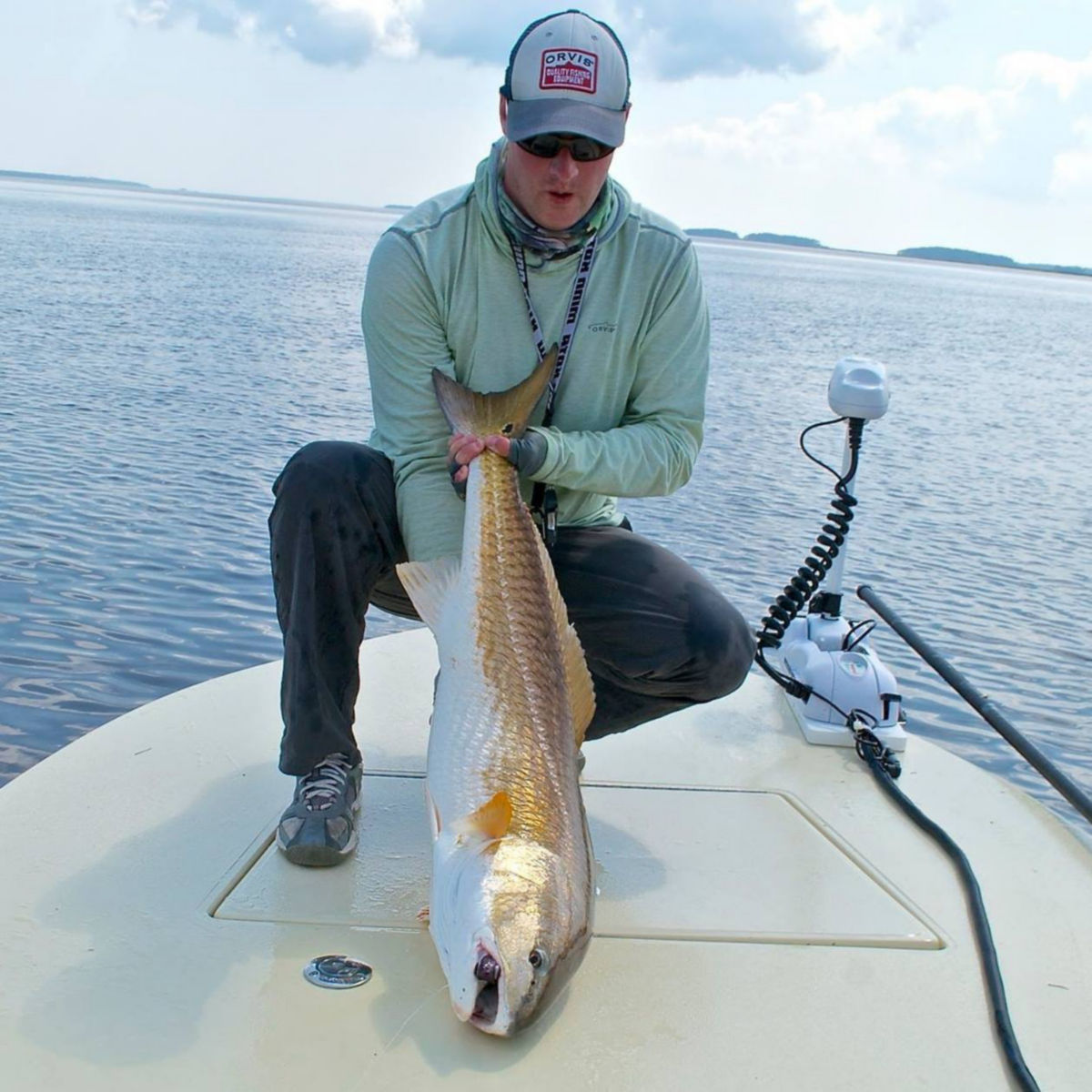 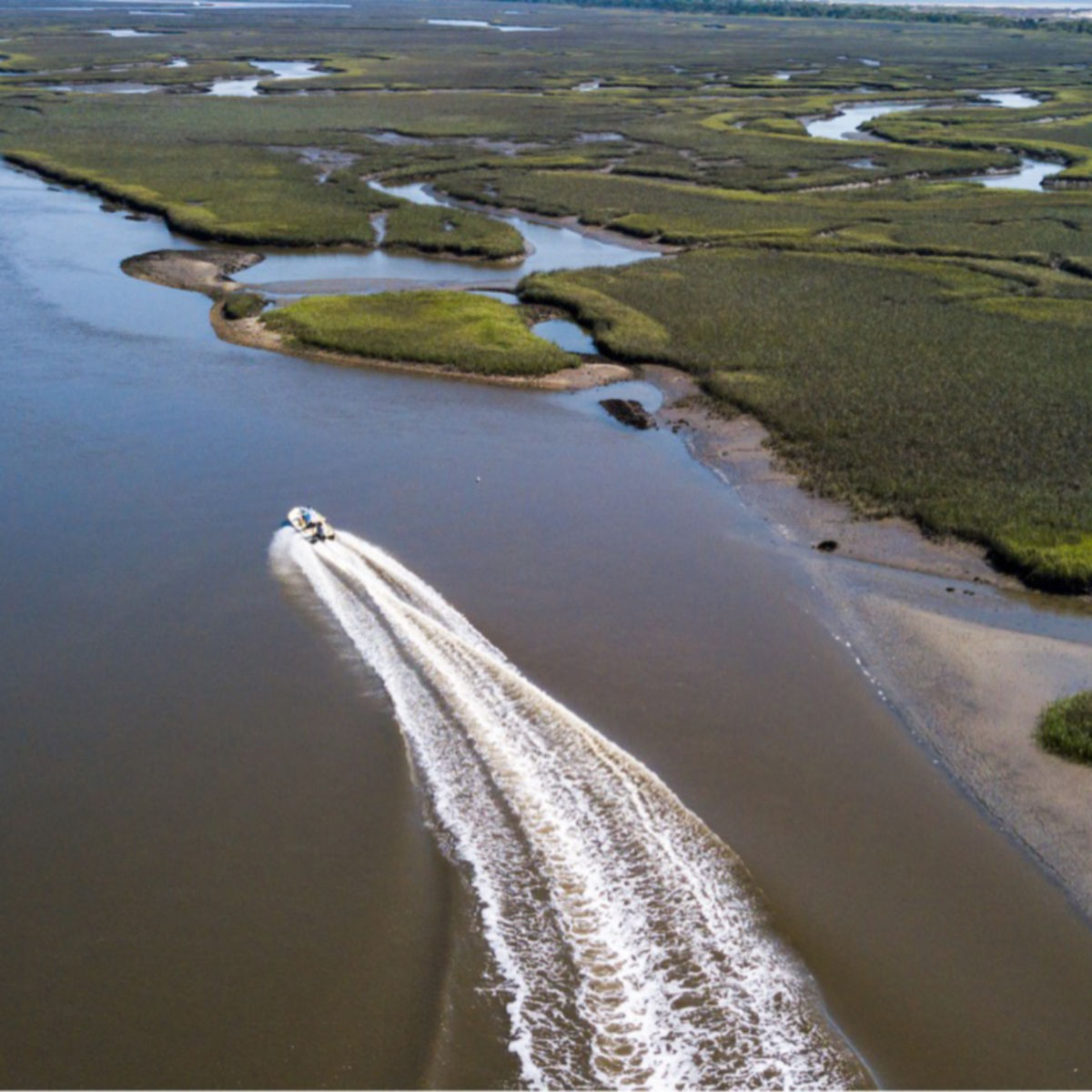 Go fly fishing in coastal South Carolina and enjoy the expertise of Orvis-endorsed guide Capt. Jeff Lattig. Jeff is passionate, patient, and hard working! His sole mission is to showcase this beautiful resource while providing a safe and exciting experience in the salt. You will be fishing from a Hells Bay technical poling skiff. This skiff is the ultimate fishing platform. She's extremely comfortable, whether crossing large bodies of water or poling the shallows. You will be provided with only the finest gear available. Capt. Jeff has a strong belief in C.P.R. (Catch, Photo and Release, which helps to ensure a healthy population of game fish for our next generation of anglers. Lee Wulff once said, "Game fish are too valuable to only be caught once.”

Spring: This is a transitional time for the South Carolina marshes. The cold winter water begins to warm and the baitfish slowly make their way back into the estuary. Blue crabs begin the shedding (molting) process. Schools of red drum begin breaking up in to smaller groups or as singles. By the end of March, flounder start moving out of the ocean and into the inlets and beaches. Speckled trout will transition out deeper holding areas around the Inlets and bays and move into shallower water to feed. Fishing in the spring can be very tricky but with the right weather and tactics it can be fantastic!

Summer: Warm water, BBQ, explosive topwater bites, and unforgettable sunsets. Summer offers anglers many opportunities to target a variety species such as Redfish, Spanish mackerel, lady fish, sharks, black drum, flounder, tarpon, and sea trout to name a few. Whether wading the flats for redfish on flood tides or casting live baits into epic blitzes off the beach, the most productive time of day is usually early morning and late evening as the fish look for cooler water temperatures.

Fall: Without a doubt, the best time of year to fish. The mullet run is wide-open and the shrimp are full-grown. Tarpon, sharks and trophy red drum gorge themselves, packing on the pounds for winter. Redfish and speckled sea trout begin to gather in schools and can be found feeding under birds or chasing shrimp in the shallows. I closely watch weather patterns in the fall. Fishing prior to a cold front can be epic with feeding activity in high gear.

Winter: Mild weather and crystal clear water can make for great sight fishing. Redfish are the primary targets along with speckled seat trout. Redfish gather into large schools of 10-25, often sunning themselves on shallow water flats. Sight-fishing in the winter months can be spectacular with the right weather and tides. When guiding multiple anglers, we can often double-up casting in to the school simultaneously.

Redfish: We target redfish 365 days a year in our marshes. They can often be found tailing or cruising in very shallow water. When these fish are in the shallows, it's an incredible sight to see! Ultimately, we feel the most exciting way of targeting redfish is in the shallows and around the grass flats during flood tides.

Tarpon: Tarpon begin to show up in our inlets and bays around June and will remain in our local waters till late September before migrating back south. Peak tarpon fishing in South Carolina runs from July though September. Tarpon fishing is very complex and ever-changing. These large fish eat a steady diet of mullet and menhaden and can travel great distances in a single tide. We study the tides and moon phases, fishing for them when conditions allow. South Carolina tarpon range from 60-150 pounds.

Speckled Sea Trout: They are often found around inlets and bays and can be targeted year round. Sea trout prefer to hold adjacent to rips and near by deep ledges. Oyster beds hold and and can funnel bait on rising and falling tides which make great ambush points for trout.

Southern flounder: Among the most popular South Carolina fishing species. These strange-looking, flat fish begin to leave their wintering grounds of nearby reefs starting mid March. They begin to invade our coastal waters during the spring and stay all summer.

Sharks: Black tips and bonnet heads are the most common sharks we target along the Grand Strand. Mature sharks tend to congregate beneath bait schools, piers, and around inlets. Bonnet heads can be sight-fished in the shallows when they're tailing or cruising much like a redfish. Sharks are apex predators and watching them attack a fly or plug is exhilarating!

I trailer my boat from many different locations based on season , weather and tides. The areas we primarily fish are Pawleys Island , North Inlet Reserve, Santee Delta and Cape Romain Wild Life Refuge.

North Inlet Reserve/Winyah Bay: Nestled between Pawleys Island and Georgetown is an ocean-fed estuary that's roughly 20,000 acres. Vast tidal marsh, expansive creeks, and deep water channels make up North Inlet/Winyah Bay. Due to the location and diversity of these waters, the majority of our fishing charters are logged here. We access North Inlet by navigating across Winyah Bay. Winyah Bay is located in the center of the historic sea port of Georgetown. The Bay is the third largest watershed on the East coast with four major rivers flowing into it: the Waccamaw, Sampit, Black, and Pee Dee. The confluence of the river systems makes it one of the most fertile estuaries on the East coast.

Santee Delta: The Santee Delta is in the center South Carolina's Wildlife Management Area and is the largest river delta system on the East coast. Santee Delta is just a short boat ride south of the historic port of Georgetown. The delta is best accessed by launching at South Island Ferry along the Inter Coastal Waterway and navigating South. The Santee's rivers empty into large bays lined with barrier islands and a vast salt marsh. The mix of fresh and saltwater produces one of the most productive ecosystems on the East coast. Saltwater species. including sharks, tarpon, triple tail, redfish and sea trout congregate here. Deep channels, oyster bars, and beaches are prime habitat for these game fish. Additionally, the delta is breading ground for marine life including loggerhead sea turtles, dolphin and migratory waterfowl.

Rates start from $400. Find all pricing information at: https://livingwaterguide.com/pawleys-island-charter-rates/

Private fishing charters include all fishing tackle, flies, leaders, baits, and lures, South Carolina saltwater fishing license for all anglers, cooler with ice and water, photos and sometimes videos of your experience.

We recommend fly rods from 7-12 wt., depending on target species and seasons. Rods from 7-10 wt. should be loaded with quick-shooting floating fly lines. For rods 11-12 wt., we recommend intermediate sink-tip. Weather can change quickly, especially during the warmer months. It's always a good idea to have rain gear as well as polarized sunglasses, Buff, hat, meals, snacks, and drinks.

A set of nippers or pliers can be very helpful for you and your guide.

Thanks for your interest in Capt. Jeff Lattig. Please let us know your questions below and our team will contact you shortly.