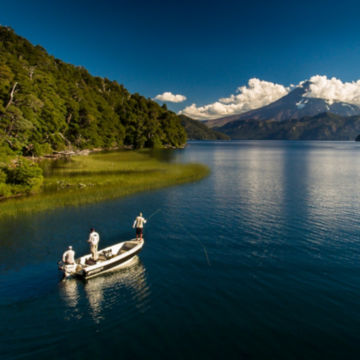 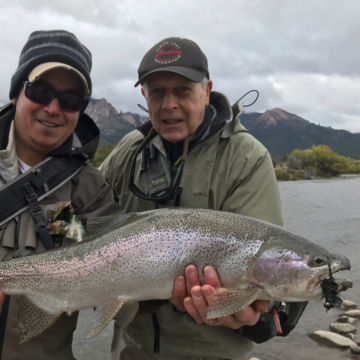 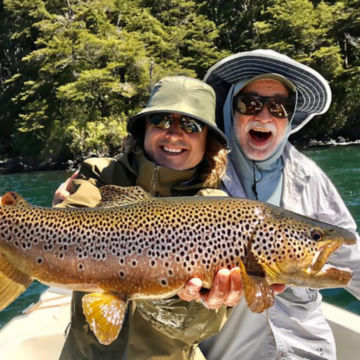 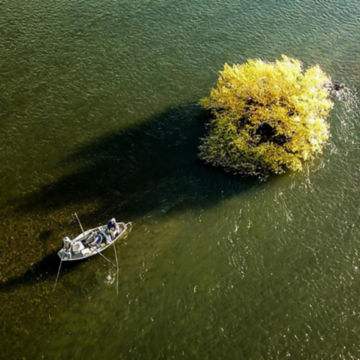 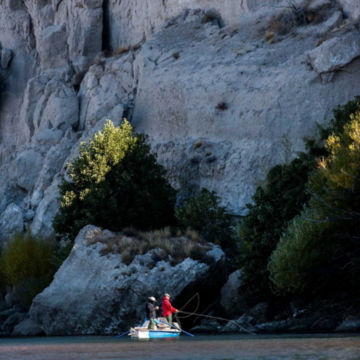 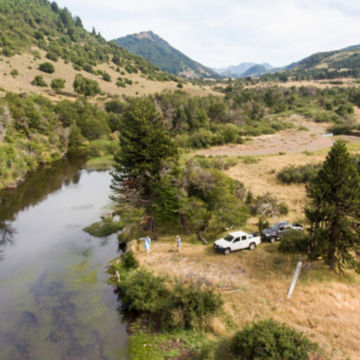 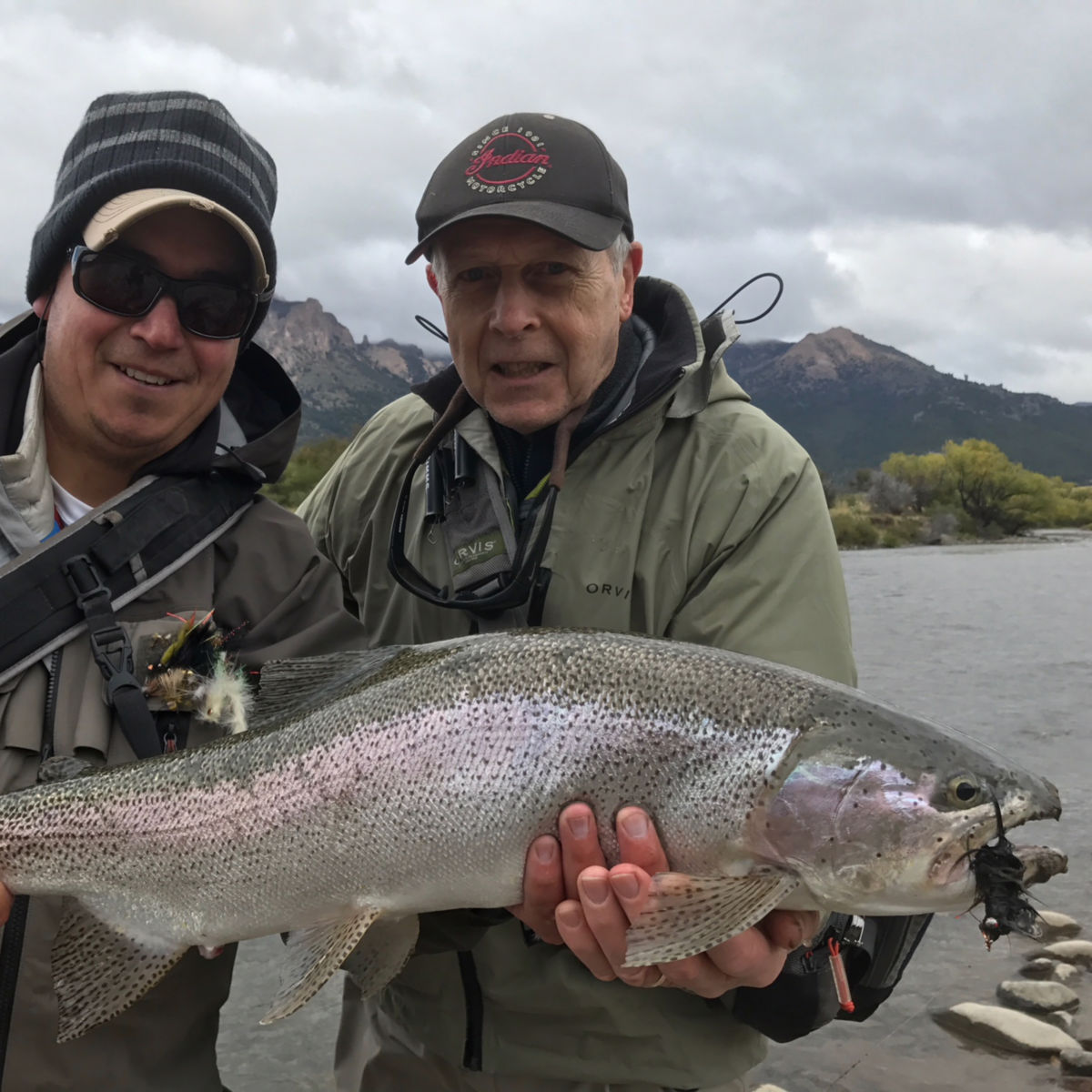 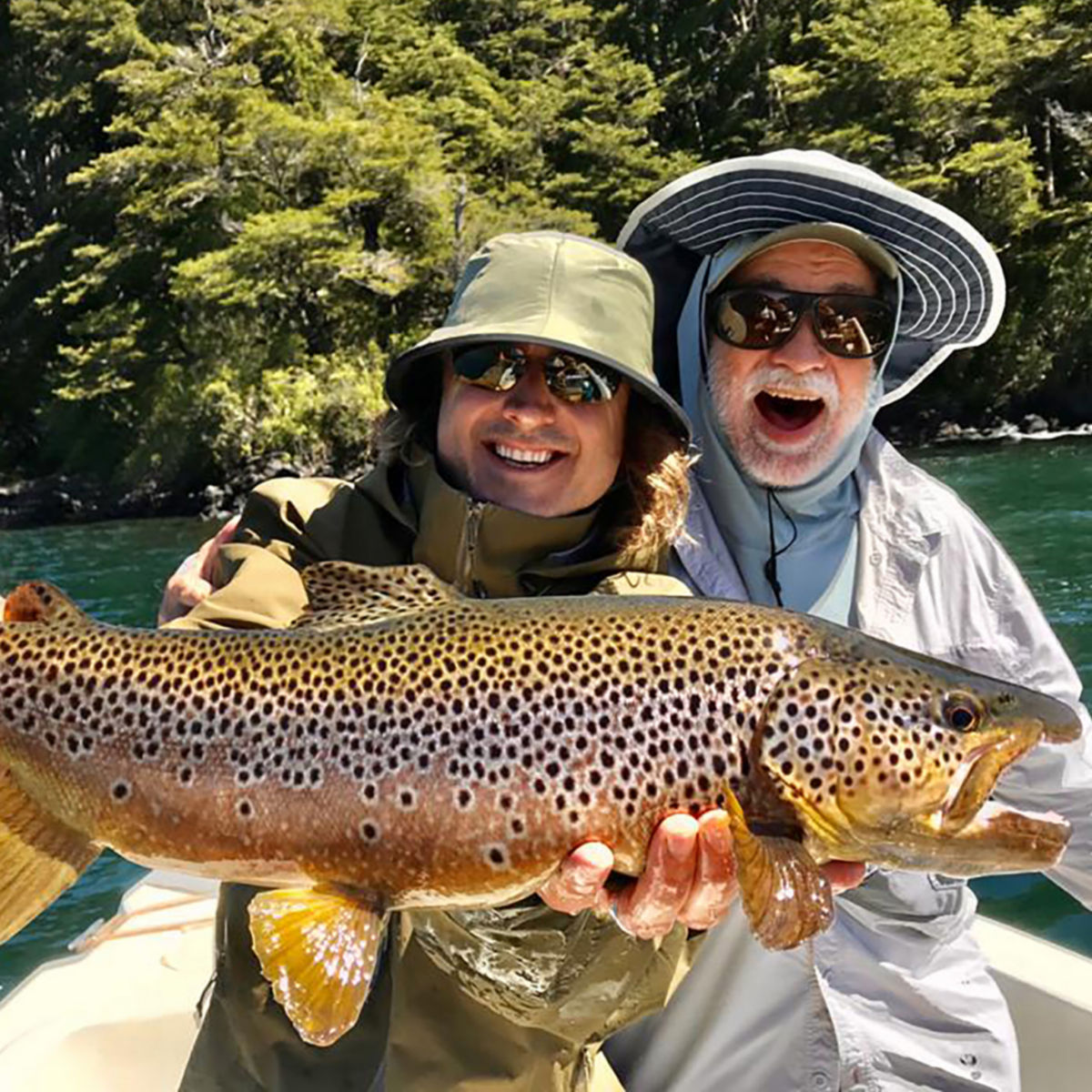 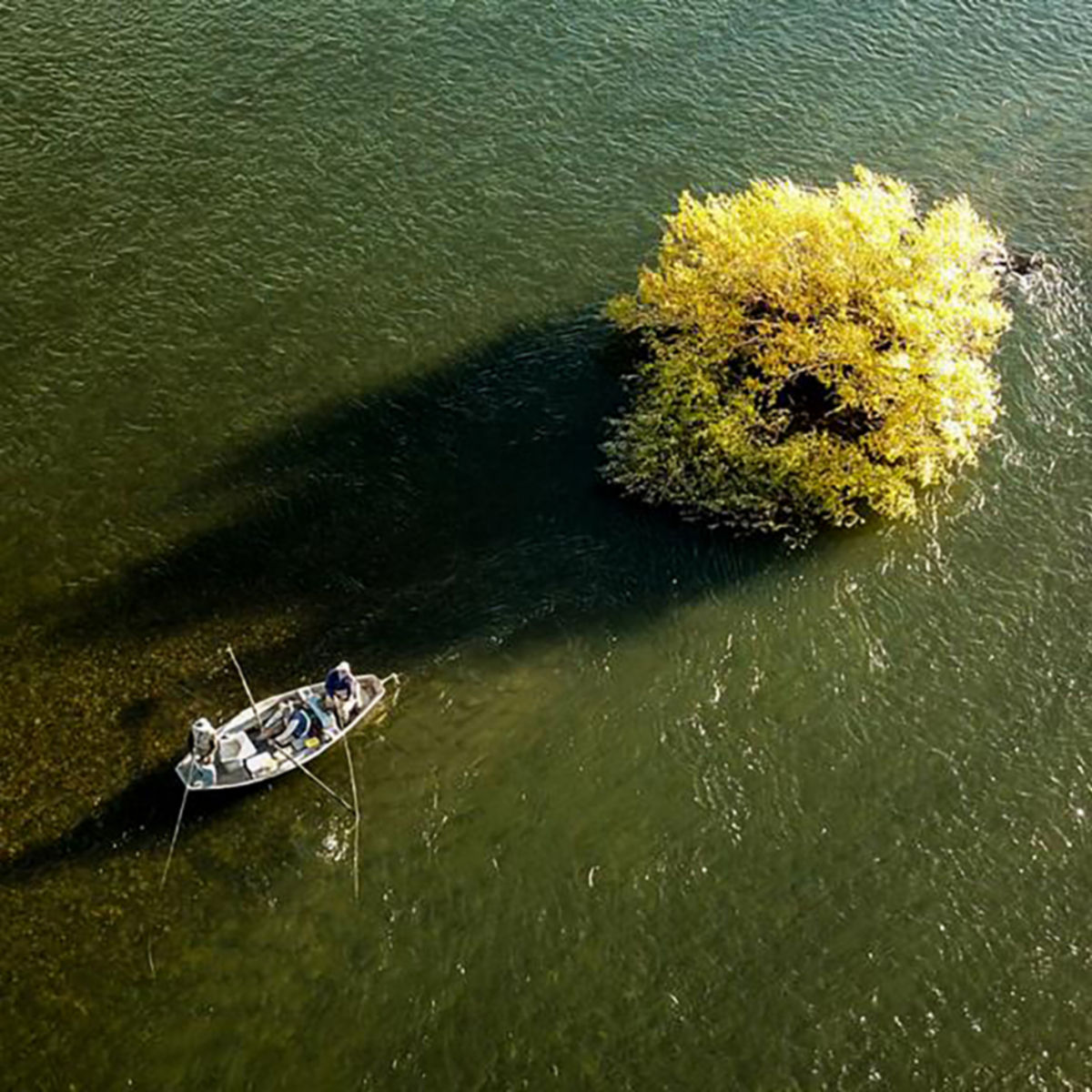 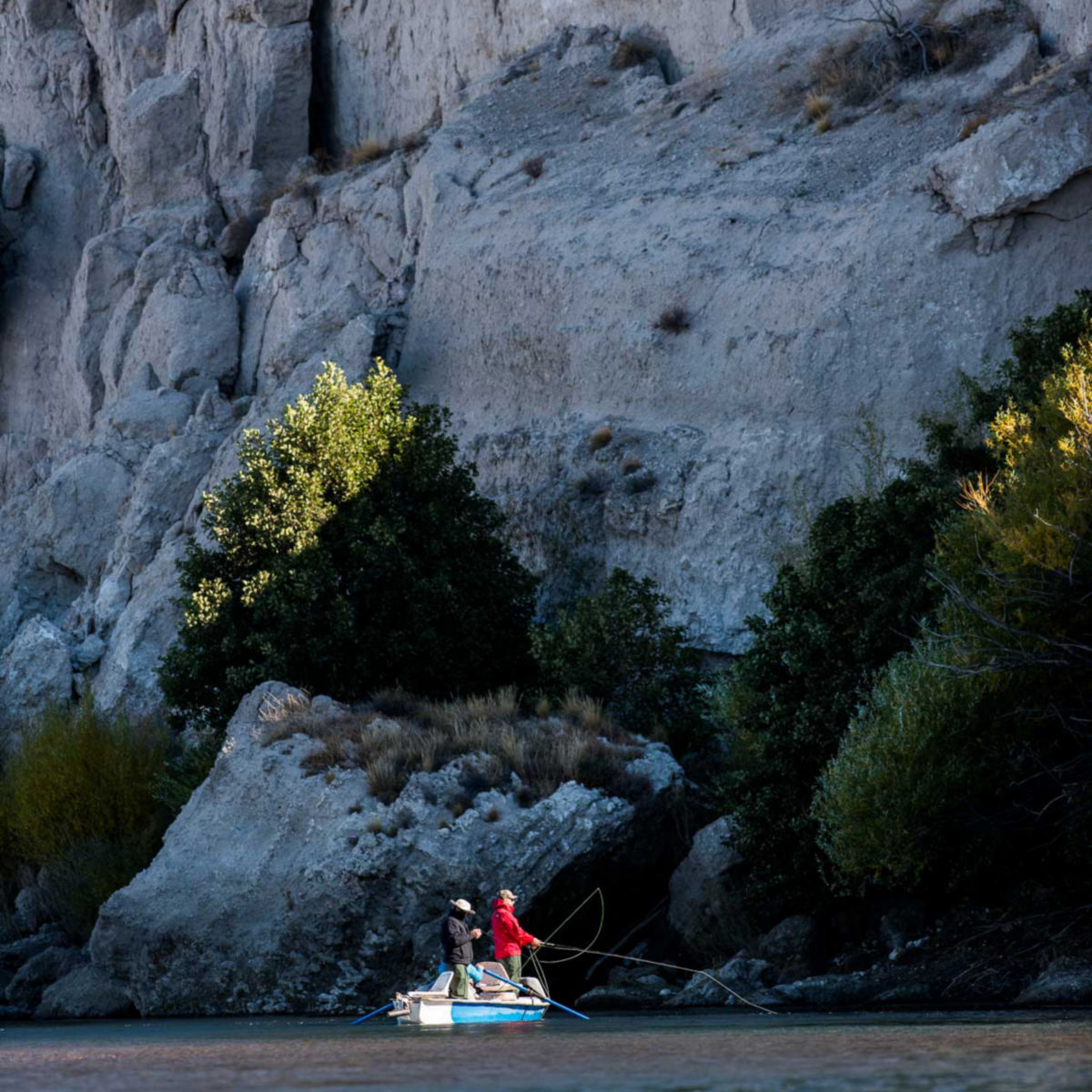 Enjoy unforgettable fly fishing in Argentina with the experts at Orvis-endorsed outfitter Patagonia Nomads. Years of guiding experience have taught us to provide a service of the finest quality. At Patagonia Nomads, we really care about our clients, so we customize trips to their likings and needs. Our priority is not just putting our clients onto fish, but making them feel comfortable with our guides, lodging, local waters, and our culture. Full customizable trips are our priority, and we focus on communicating with our clients to find out what kind of fishing each person prefers, what kind of lodging they feel more comfortable in, and how long they would like their stay to be. We have personable business partners in the US that are ready to help answer any questions or concerns.

San Martín de los Andes is our home base. This tourist mountain town is in the Northern Patagonia region of Argentina. We are lucky to have dozens of rivers and lakes of different characters, all within an 80-mile radius. Our fishing season extends from November to May. Since our options are many, and we know which body of water fishes better at what time of the season, we try to get our clients to fish the most productive waters as the season progresses.

Experience has taught us that client–guide relationships are very special in Patagonia. Clients and guides get to spend days with each other; they share meals, thoughts, frustrations, and victories together. Our guides are not only fishing experts, but they are fluent in English, personable, and friendly. We all develop long-lasting friendships with clients and find our clients come back because of such relationships. Diego Oliver, Sancho Ramis, and Lucas Buxton have spent the last 18 years guiding this special region of the Patagonia area. Over these years, we have come to the realization that visitors end up falling in love with our culture as much as the fishing. We end up drinking mate (local tea with the guides or building parrillas (grills) for their asados (barbeques) at home. Some even take home recipes to make empanadas (local meat pies) or frame pictures of the Gauchos (local cowboys) they photographed at the local estancias (ranches). In the end, building friendships and relationships is the most important to us!

Even though we can provide some gear, we recommend you bring your own fishing gear. We have often found clients much more comfortable in their own waders and casting their favorite rods. We recommend 9 foot, 5 through 7 weight rods. Floating lines for dry-fly fishing and sink tip lines in the 200- to 250-grain range. We provide all of the flies, but it is always nice to dig into clients' fly-boxes in search for something new, so we encourage clients to bring their own flies as well. We highly recommend felt sole wading boots. We do not have any restrictions regarding felt, and we feel much safer for our clients to wade in felt sole boots. Our mountain weather is quite unpredictable, so we recommend you bring a variety of layers. Even in the summer evenings, our temperature may drop to the point where you would need at least a nice fleece. On the other hand, sun protection is a must, a good hat, buff, and especially sunblock is very important.

We encourage you to bring whatever you might like or need to make your day better. It could be anything from a pair of binoculars, to SLR cameras, reading material, music, even a musical instrument! It is all about having fun.

As we live and operate in the southern hemisphere, our seasons are reversed. Our fishing season is November through May.

Patagonia Nomads' focus throughout the season is to chase the best fishing. Historically we fish smaller rivers and spring creeks at the beginning of the season in November and December. Every mid-sized piece of water seems to fish well during December – February, and the larger streams/rivers fish well at the end of the season, March on to May.

Rainbow and brown trout are the main species we target. Depending on the river or lake, we could get into some brook trout as well, and we do have a native species called perca that you may occasionally catch. Expect to hook more rainbows than browns. Our trout are wild, they were introduced over 100 years ago, and they have successfully reproduced since, so expect to catch hard fighting fish!

Patagonia Nomads' center of operation is in the Lake District of northern Patagonia. We operate near the small towns of Junin de los Andes and San Martin de los Andes. We fish inside the Lanín National Park and all the rivers that flow out of the park. Our mountains are not very high in altitude, the western part of our region is surrounded by dense forests of native trees, and as you head east, it becomes drier and the dessert starts. The Lanín Volcano is the highest peak in the region at around 12,000 ft and is the major landmark that can be seen from many surrounding fishing spots. Rolling hills surround the shrubby desert. The real beauty and wildness of our region starts only a few miles away from civilization. Patagonia Nomads fishes dozens of rivers and lakes within a 60-mile radius, so average drive times depend on where you stay, but on average, it is 30 minutes to one-and-a-half hours, just like the Western US. Each river has its own character. We wade rivers that are easy to wade like the Filo Huahum, Upper Malleo, or Quillen; others are a bit harder to wade like the Lower Malleo and Chimehuin, which can be easily floated as well. We float the world-famous Chimehuin and Collon Cura and larger rivers such as the Limay and Aluminé. Options are many. Once you let us know what kind of fishing you like, and what time of the year you are planning your visit, we can easily narrow down a fishing itinerary.

While in Patagonia, you can expect a variety of weather. November and beginning of December, the weather is usually a bit unstable; you can certainly have warm days but expect a little bit of cool wind and some cloud cover; the temperature can range from the 40s at night, up to the high 70s – 80s during the day. Our summer months can be nice and warm, mid to late December is when the warm weather settles in, temperatures range from the 50s at night up to high 80s to low 90s during the day. Our hottest month is usually February; temps can get up to the mid-90s. Fall is normally our most stable and predictable weather. Starting late March through early May, temperatures range from the 30s – 40s at night to mid-70s during the day. Weather can be unpredictable living at the Andes' foothills, so expect to have cool days at any time of the summer. We strongly suggest you bring a variety of clothing layers to cover hot to cool weather.

Our operation provides lodging, all meals, and drinks, including alcoholic beverages such as wine and beer that are usually served with lunch or dinner. When staying at private ranches, an open bar is provided at no additional cost. Clients are also welcome to bring their own alcoholic beverages in case they like something in particular. Transportation to and from the airport is part of our service.

Local airport shuttles are included in our price. In the case we must travel to a distant airport, a fee will be charged, and you should be notified beforehand what the fee will be. We have experience with clients that have limited mobility; those clients are as welcome as anybody else. Wireless internet is available at the lodging establishments.

Depending on the time of the year, we can set up a variety of activities. If you prefer to take a day off from fishing or travel with a non-angler, we offer horseback riding, mountain biking, hiking, visits to local museums and galleries, and boating.

Thanks for your interest in Patagonia Nomads. Please let us know your questions below and our team will contact you shortly.