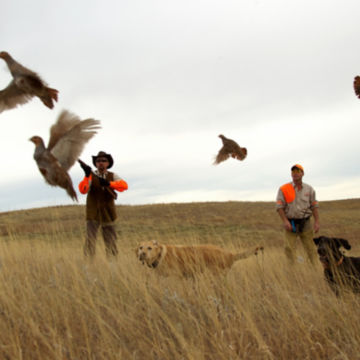 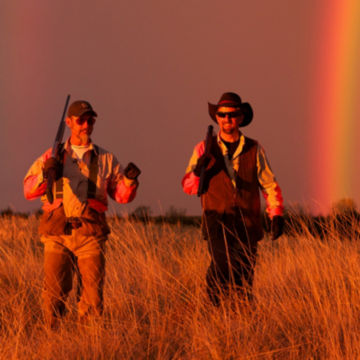 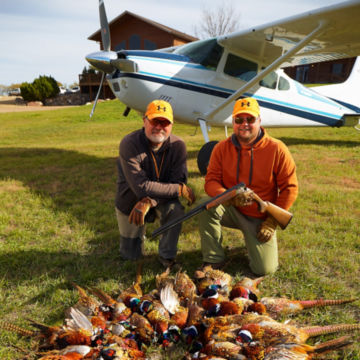 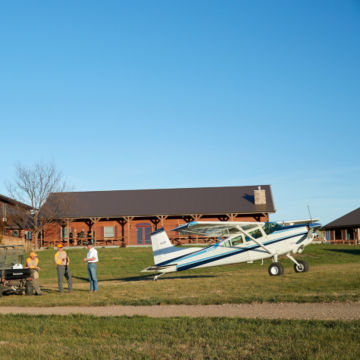 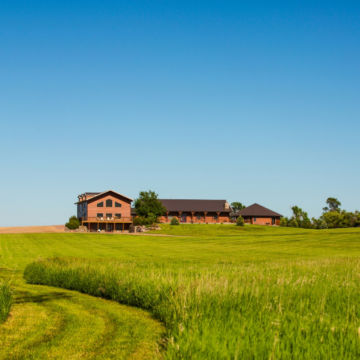 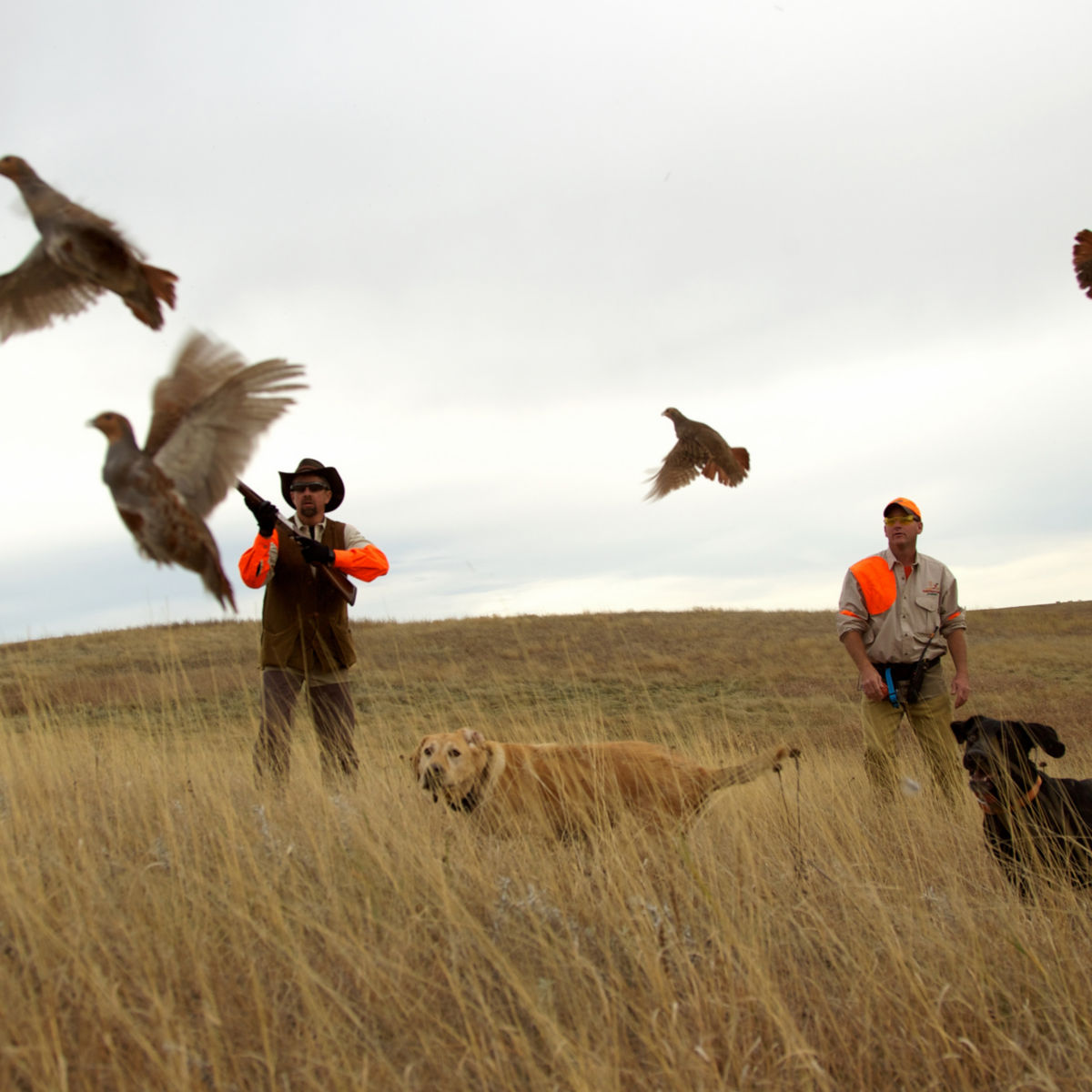 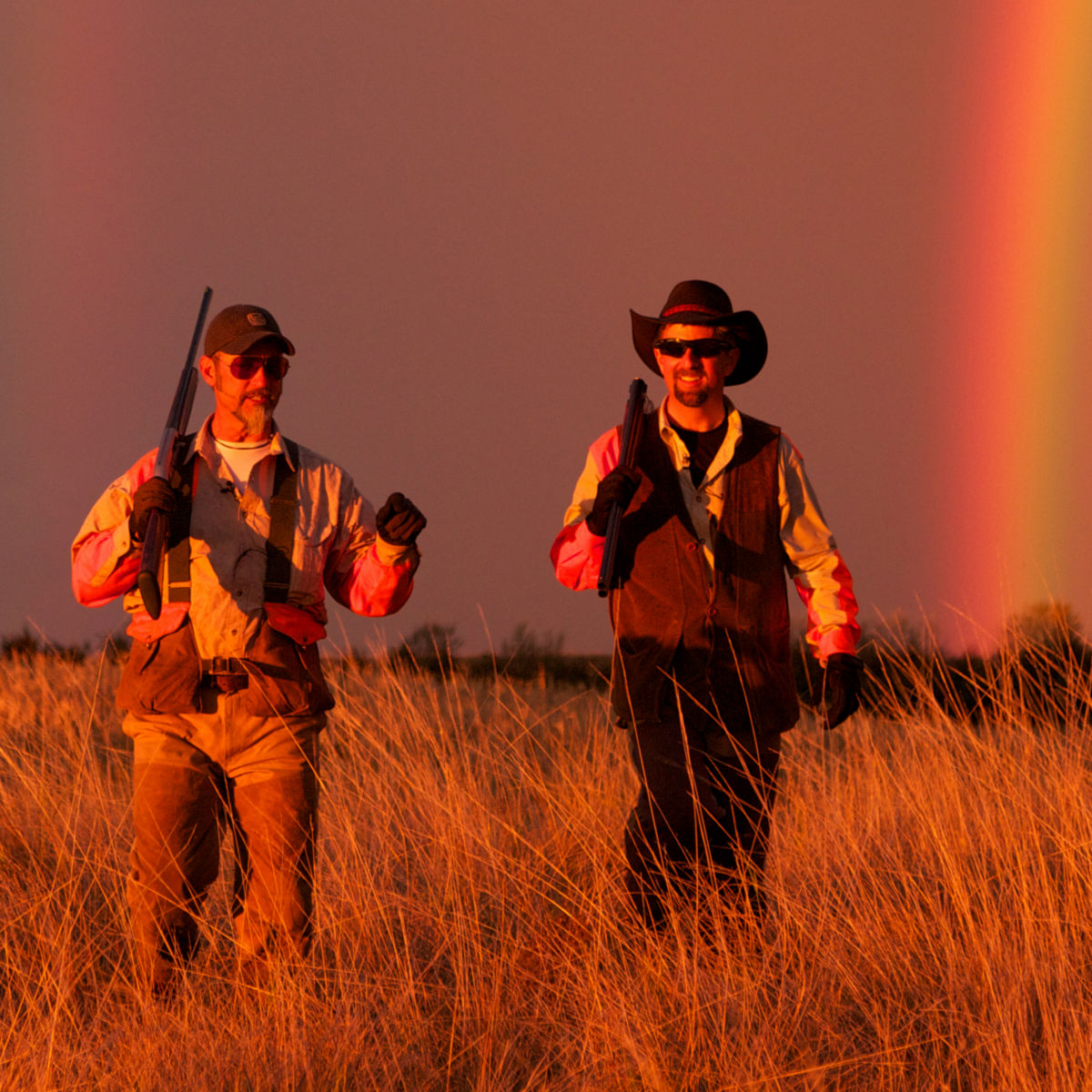 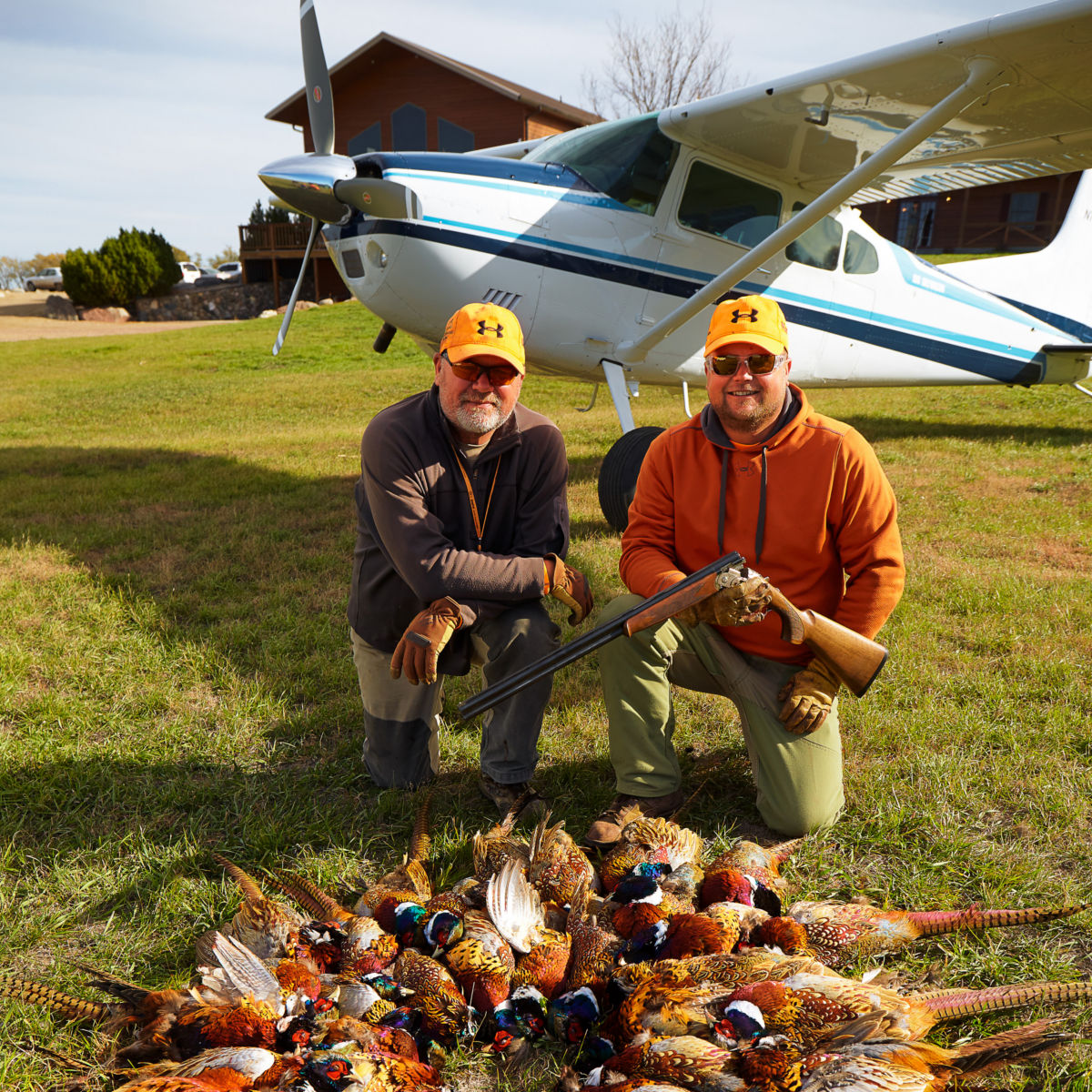 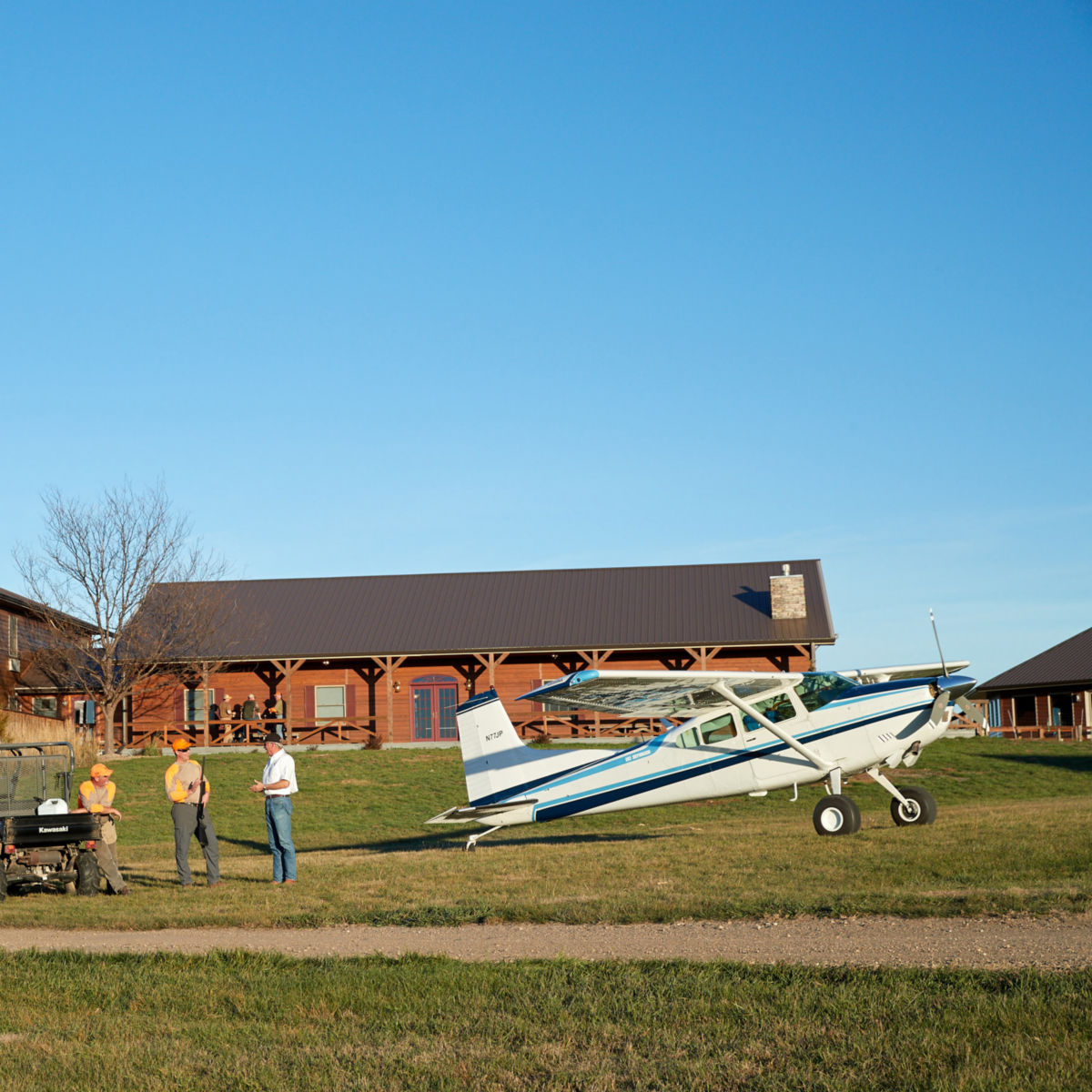 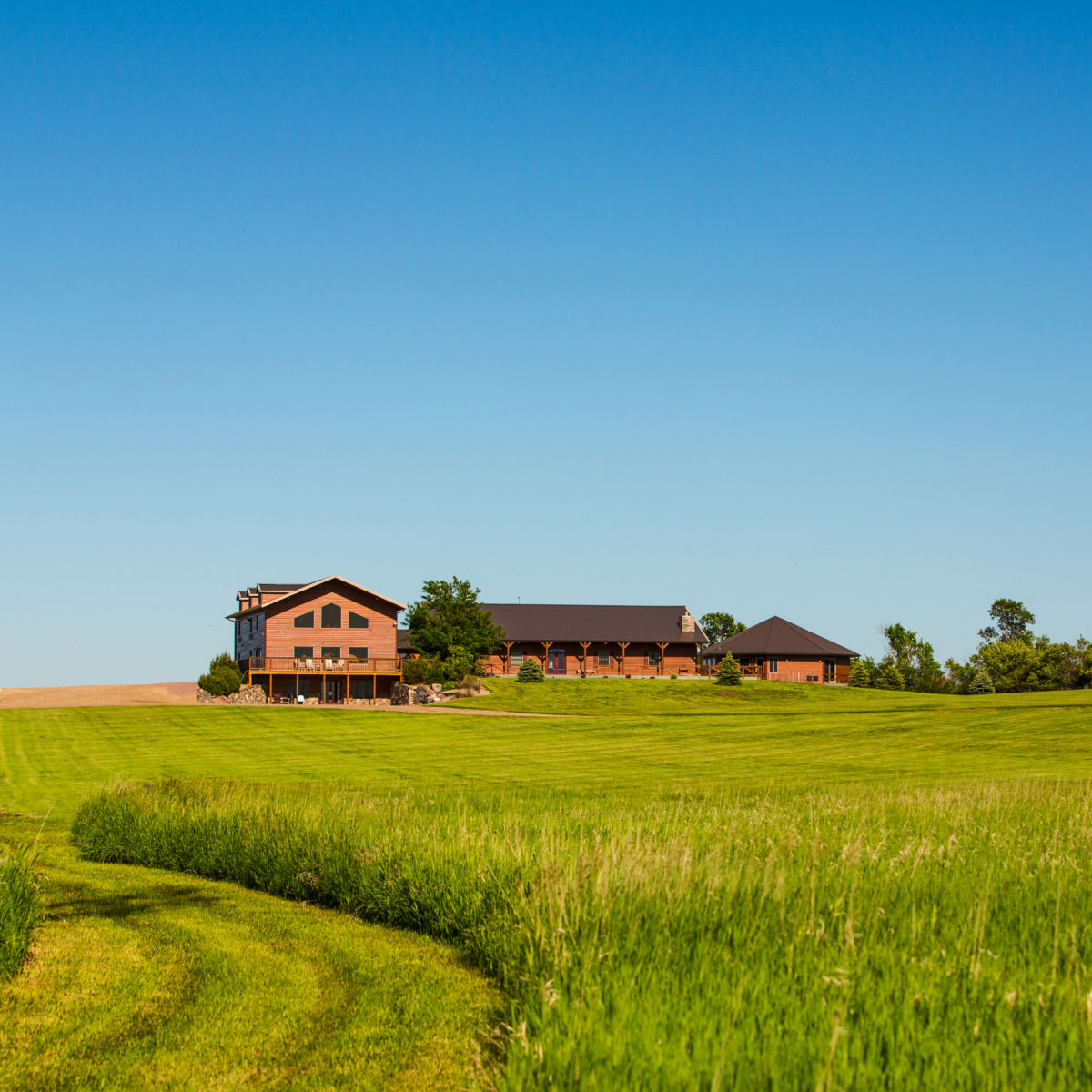 For more than 25 years Tumbleweed Lodge has provided world class wingshooting experiences in central South Dakota on the Bollweg's farm. Whether you're targeting one species or "The Grand Slam of the Dakota's", autumn in the Northern Plains means one thing...South Dakota upland bird hunting at Tumbleweed Lodge. The Chinese ring-necked pheasant may be king, but the untamed prairies of South Dakota are also home to Hungarian partridge, Sharp-tail grouse, and the elusive Greater prairie chicken.

Complimenting “The Grand Slam of the Dakota's” is a wide array of waterfowl species that pass through the hunting grounds in December as they travel south through the Missouri river flyway. Your stay will only be heightened by first class lodging amenities in their 18,000 sq. ft. lodge which can accommodate up to 24 guests.

You will feel right at home in Tumbleweed Lodge's 18,000 sq. ft. lodge which includes 12 spacious bedrooms; each with two queen size beds, private bath and desk area. Common areas include a number of lounge areas with big screens to catch the game, poker room and cigar parlor, steam room and jacuzzi spa. You will immediately recognize why they were named one of the Top 10 Greatest Hunting Lodges in the World on the Outdoor Channels' "Outdoors" 10 Best.

Hunts begin the third weekend in September on more than 12,000 acres and continue through the first weekend in January with extended hunting through March on 3,000 acres. Wild, early-release, and preserve pheasant hunting, Hungarian partridge, sharptail grouse and the greater prairie chicken are complimented by waterfowl hunting.

Tumbleweed Lodge has a great selection of gear in their outfitter shop.

A 3 day/4 night package consists of 5 days total with 3 full days of hunting and a travel day on each end. Check in is anytime after 2:00 pm on your arrival day. Guests flying into the Pierre Regional Airport (PIR) are provided complimentary shuttle transportation to/from the lodge.

After being greeted by the Bollweg's you can settle in your room and enjoy a cocktail. Licenses are issued as well as gun rentals for guests requiring them prior to dinner which is served at 7:00 pm.

Breakfast begins at 8:00 am. At 8:45 am the first morning only a safety video/briefing is provided in the lodge. At this time you will meet with your guides and shown what vehicle/location you will be at for the day. At appx. 12:15 pm you will return to the lodge for lunch and a little R & R prior to the afternoon hunt which begins at 2:30 pm. The afternoon hunt is geared for sporting clays, extra pheasant hunting or the prairie grouse species hunting which is a 20 minute drive. Your guide will return you to the lodge by 6:30 pm or at dusk; whichever arrives sooner. Dinner is served at 7:00 pm.

Depending on your departure time; either a full or continental breakfast is served. If you are flying out of PIR, a shuttle will be waiting for you. Coolers with your processed birds will be shipped to you with 3 business days per arrangements made between you and the lodge.

Waterfowl Hunts: In December waterfowl hunts take place in the early morning. Guests depart the lodge with their guides by 7 am and return by noon. Upland bird hunting begins at 2:30 pm until dark.

Mid-September through mid-November: Pheasants, sharptail grouse, prairie chicken, and Hungarian partridge are hunted over flushing and some pointing breeds of dogs.

Mid-November through December: All species are attainable however pheasant and waterfowl species are the primary target during this timeframe.

Located 30 miles east of the Missouri River near Harrold, SD (elevation 1785'), the upland habitat hunting at Tumbleweed Lodge consists of light rolling terrain including a perfect blend of corn, sorghum, maize, and sunflower, shelter belts, western wheat grass, witchgrass, and waterways. For the hunter aiming for the "Grand Slam of the Dakotas"; alfalfa fields, rolling draws flowing with native grass, plum and buckbrush thickets provide the ideal habitat to sustain an ample population of prairie chicken, sharp-tail grouse, and Hungarian partridge. Due to the native habitat blended with the right mix of food plots and moisture; South Dakota is by far the leader in harvesting the Chinese ring-necked pheasant.

What is Provided to Customers

Tumbleweed Lodge provides guests an opportunity to sharpen their shooting skills with a complimentary 9 station sporting clays course. A National Certified Shooting Instructor and State Certified Shooting Instructors are available upon request. Dove hunting and fishing in a number of ponds on the property are offered based on availability. A poker room, cigar parlor, and steam room round off the amenities associated with evening activities

The South Dakota Cultural Heritage Center and State Capitol located in Pierre provide a great place to learn about the history of the state. The Missouri river, segmented by 5 dams across the state, not only generates hydro-electricity but is also a world class fishery of walleye, smallmouth bass, and northern pike.

Q. What are the closest airports?

Q. Is it customary to leave a gratuity?

A. Gratuities are not expected but appreciated. It is common that guests leave a gratuity for the staff and many ask what is the amount of a normal gratuity. Gratuities range between 10 & 15% of the package price and may be paid upon settling up incidentals at the end of your stay. Typically 2/3 to 3/4 of the gratuity is then paid to the guides with the balance shared among the lodge staff. This has been a common practice and ensures that no staff member is inadvertently left out. Again, we strive to provide you the best service possible regardless of gratuity.

Thanks for your interest in Tumbleweed Lodge, SD. Please let us know your questions below and our team will contact you shortly.