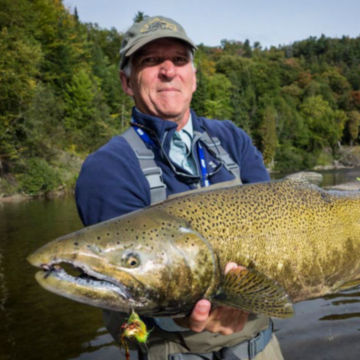 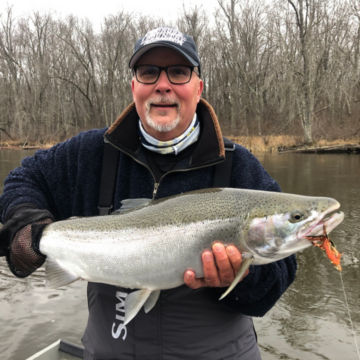 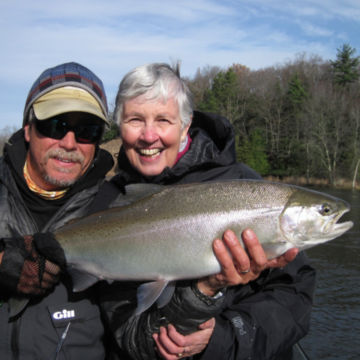 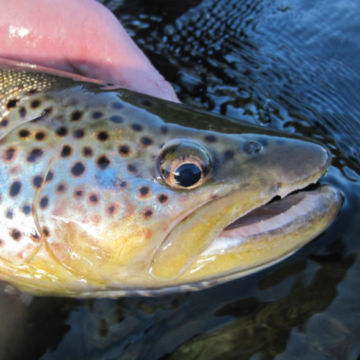 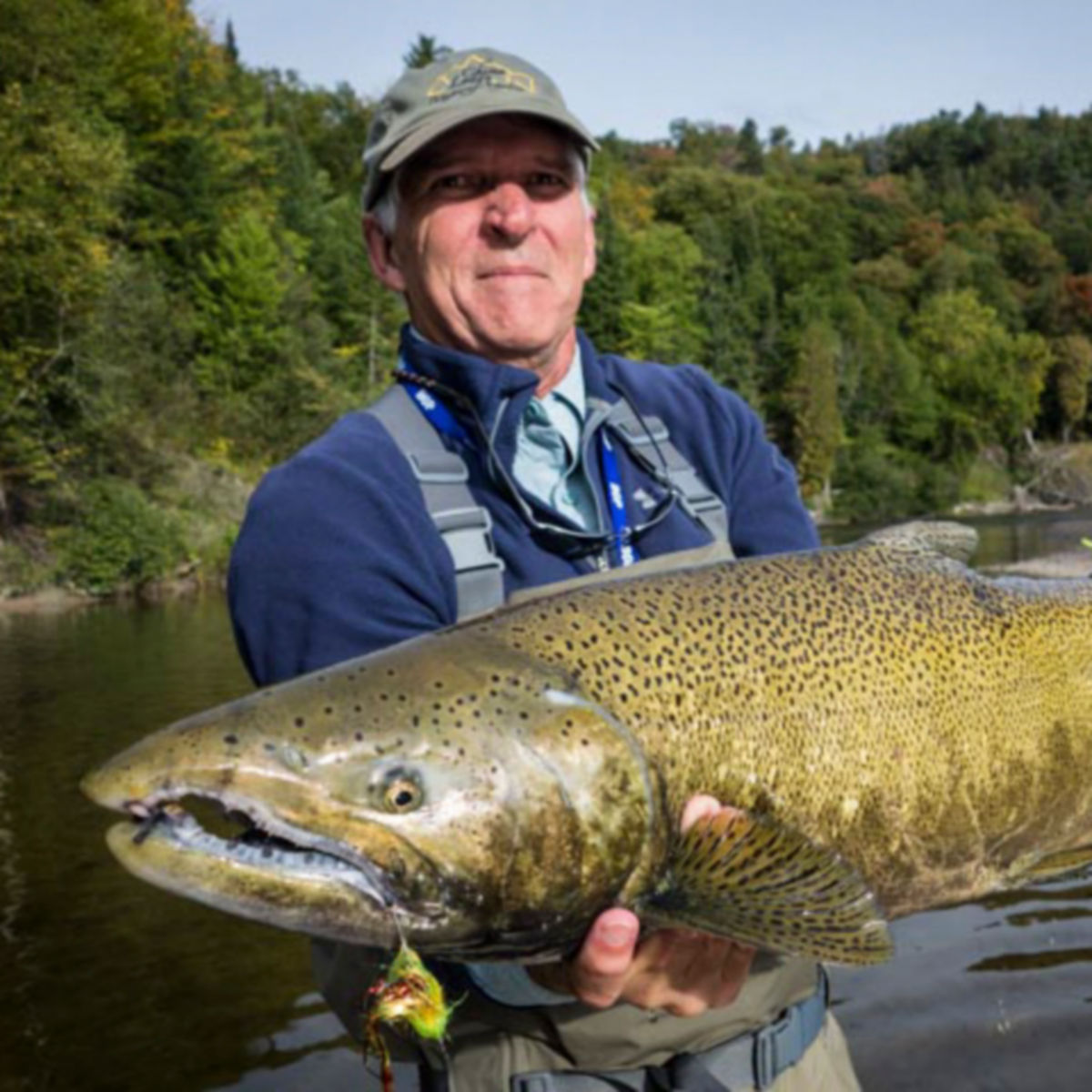 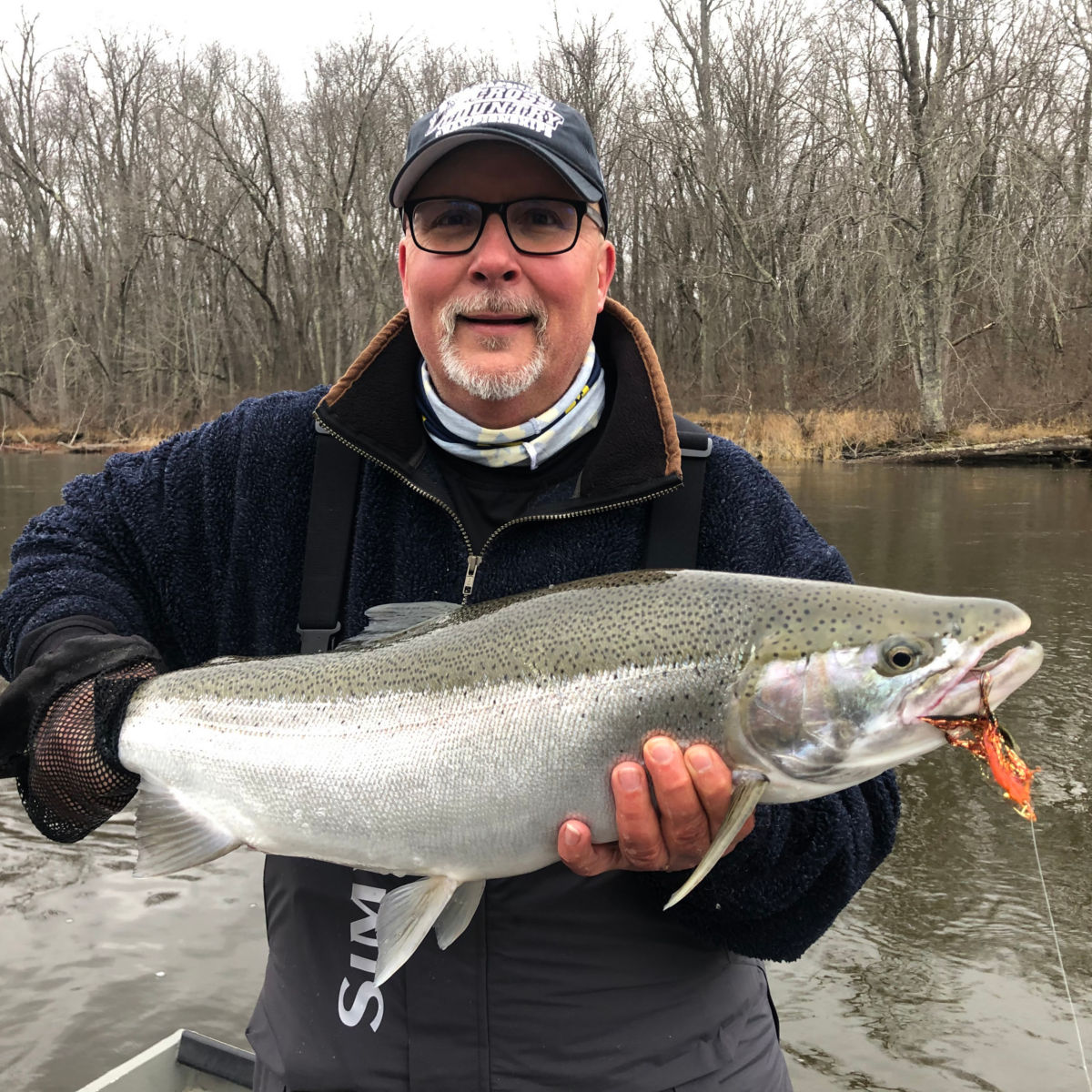 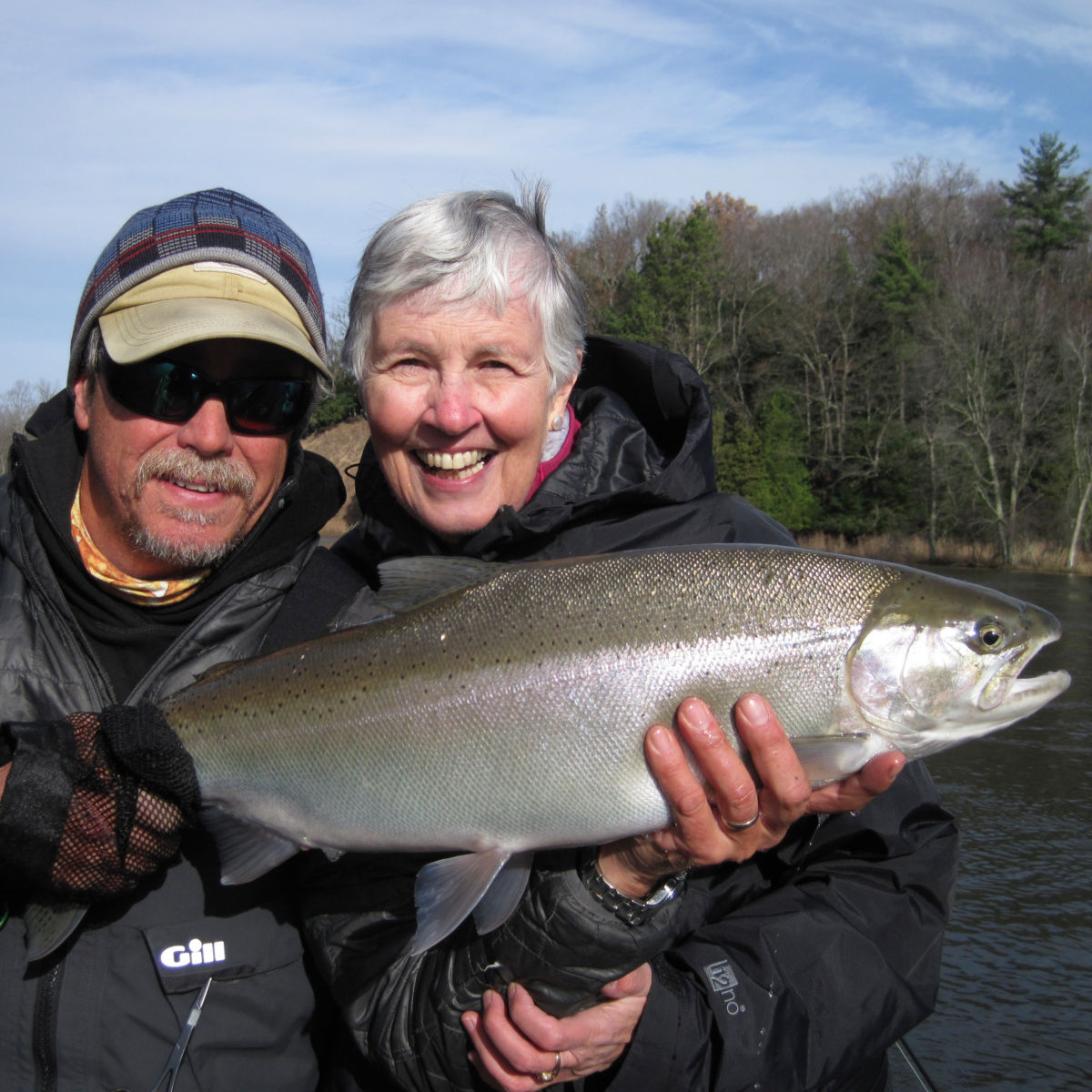 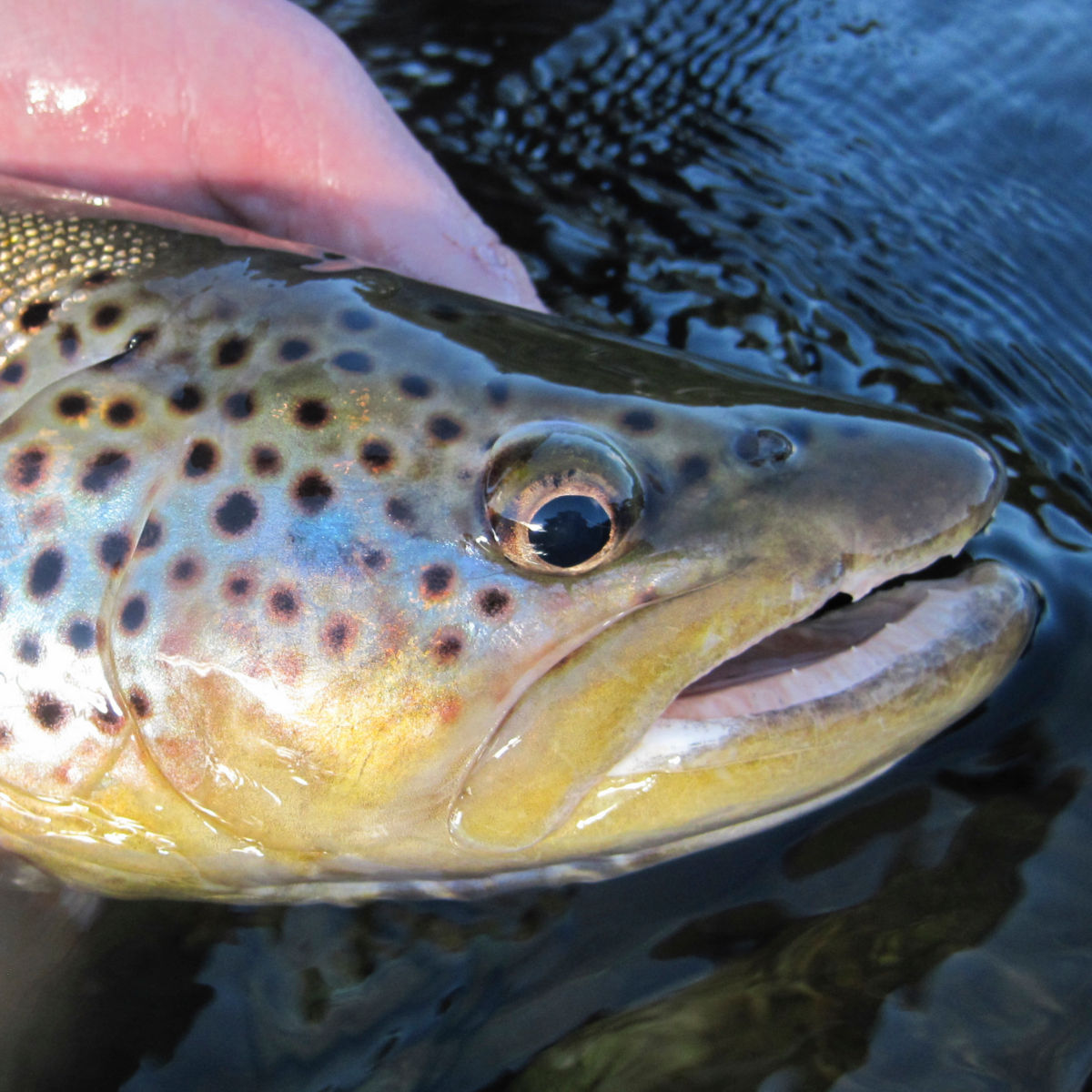 Hawkins Outfitters is a catch-and-release fly-fishing guide service based near Traverse City, Michigan. We have been in business 19 years, fishing our local lakes and streams. We are fully permitted by both the State of Michigan and the United States Forest Service to use all of the area's lakes, rivers, and streams.

Hawkins Outfitters was founded on the principle that a guide can't control the weather or the fish, so he/she is responsible for controlling everything else. Our boats and equipment are first rate, meals are fresh and tasty, and my guides arrive excited to go to work and help our customers reach their fly-fishing dreams. Our skill at that was one reason we were named the 2010 Orvis-Endorsed Fly-Fishing Guide Service of the Year.

We guide beginners to advanced anglers—young and old alike—with a great attitude and a desire to have a wonderful day on the water.

We are not a shop or a lodge, but rather a group of guides that love to guide and wish to take you fishing on "Any River... Anytime."

What to Expect Water and/or Terrain Pricing & Dates FAQs

Hawkins Outfitters offers single-day trips or trips of any duration that you desire. You are typically with our guides for 8-9 hours after meeting him at an easy-to-identify location.

In conjunction with my partner Martin Carranza of Chime Lodge, we offer week-long trips to Patagonia in Argentina in Jan-March every year.

We provide rods and reels, a meal on full-day trips, plus beverages.

The customer needs to bring their own personal stuff such as sunglasses, rain gear, sunscreen etc.

Hawkins Outfitters fishes a 90-mile radius around Traverse City, Michigan. We fish the Manistee, Boardman, Pere Marquette, Betsie, Pine, and Platte Rivers, along with some other smaller creeks. The Lake Michigan bays in our area, and many inland lakes, give us ample opportunity to fish for all species available.

The weather is typical northern Michigan. Winter starts around Thanksgiving and ends in April. Temps can run from low 30s down to zero. Storms are always possible, but winter on a decent day is a great time to fish. Spring is May, with summer starting in mid-June. The temps/weather can be unpredictable, with temperatures from freezing all the way up to 80 degrees. The leaves start changing in October, signaling the arrival of fall—a beautiful and busy time of year. Cool to cold mornings give way to nice afternoons.

Species You Fish for by Season

Michigan has fish that can be caught by fly anglers 12 months a year. Steelhead are available most years from mid-September until the following April, with prime time being October and November, followed closely by December through March. Resident trout fishing runs from late April through November with May and June being prime time. Salmon start showing in August most years and hang around through October.

Small- and largemouth bass, bluegills, pike, and other warmwater species are pursued successfully from May to October in both lakes and rivers. Carp and smallmouth on the Lake Michigan bays are prime in early June.

We are a year-round guide service because Michigan offers year-round fishing. Spring fishing starts in March and continues through April. May is the preview to summer, with bugs beginning to hatch and the lakes and streams are waking up from winter. September we feel the nights begin to cool, with October bringing the color to the leaves. December starts the long, northern winter. My guides fish every day in winter that the temperatures allow.

At what age can a child start to fly fish?

Most kids can pick up basic casting skills and catch panfish around the age of 5.

How far in advance do I need to book my trip?

Prime-time steelhead trips for the fall need to be booked by June most years. Prime bug hatches in the month of June are usually full by spring. If you are date-specific in a prime time, earlier is better.

Yes, we have single-handed rod techniques that will get you hooked up on steelhead.

Do you have accommodations?

No, we like to move around and fish a variety of waters depending on species and time of year. We do provide you with a list of housing options when you book a trip with us.

How many days should I fish?

That depends on your schedule, ability, and desire. We suggest a minimum of two days if you are traveling a distance or learning a new technique.

Thanks for your interest in Hawkins Outfitters, MI. Please let us know your questions below and our team will contact you shortly.