How to Fly Fish from a Raft 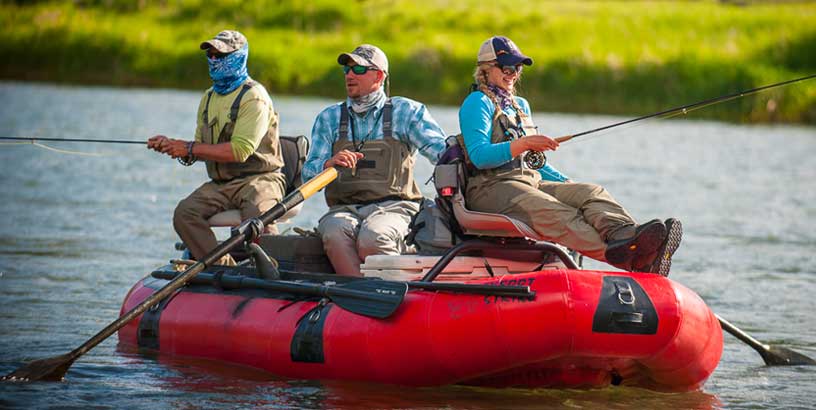 The Raft versus the Drift Boat

In terms of basic function, a raft is no different than a drift boat in terms of river trip fly fishing adventures. A raft is designed to drift down the river with the current, with the rower or guide controlling the speed by facing forward and pulling against the current. This allows him or her to regulate speed and guide the boat through and away from all the potential hazards that a river may offer up, from fallen trees to big rocks and even rapids. Controlling a raft down a fast river takes skill and a great deal of practice.

But this is where the similarity between drift boats and rafts ends. Whereas drift boats are solidly constructed and need to be pulled behind vehicles and launched at certain places, a raft does not. A big expedition raft is a large, inflatable boat affixed to a rigid aluminum frame to give it the structure necessary to load and handle all the equipment and the passengers on a multi-day expedition. Herein lies the benefit of the raft. With the frame disassembled, and the raft uninflated, you can load a 14-foot cargo raft on the back of a horse or in the back of a DeHavilland Beaver and drop it in places where no vehicle pulling a drift boat is ever going to go. Alaska is a prime example of this type of expedition. If you can land a floatplane there, you can take a raft.

The same can be said for wilderness trips where guides and anglers ride horseback up into the wilderness for two or three days to the top of a river, and then float and fish back down it for two or three days. Tough to do with a drift boat. Whereas you can access some great water in a drift boat, on a fly-fishing raft expedition from a remote locale, you will access places that very few people see, in fact in many cases, only those people who take the same trip with the outfitter. In Alaska you can land on a lake high up in the mountains of the Bristol Bay region, build and inflate the rafts, load the supplies, and spend seven to ten days floating down through wild, untouched territory until you get to the mouth of the river. During salmon season you can fish all the way down and witness the miracle of the return of thousands of salmon in that river returning to spawn, and the remarkable array of species that their return and ultimate death support.

There are many different ways to fish from a raft, but generally it is easier to stop the raft and fish stretches of the river by wading. On expedition rafts, the guide is seated in the middle with the oars and all the fly-fishing gear is stowed fore and aft of him. This provides a back rest for the anglers who are sitting on the front edge and the rear edge of the raft. That frees them up to cast and fish as they please while the raft is moving and then easily hop off when stopping to fish a certain stretch of water. The rules are similar to a drift boat but not quite as stringent. Where most of the fishing in a drift boat is from the boat, most of the fishing from a raft is done off the raft when stopped.

A fly-fishing expedition on a raft is a chance to go to places and see parts of the country that very few people ever get to see. It is truly the ticket to places where few men have been and that in and of itself is worth the journey. In the hands of an experienced guide the raft is a spectacular way to experience this country. In the same manner as John Wesley Powell, Lewis and Clark, and the explorers who discovered this land, the river is your highway and the current is your engine. The only man-made sounds you’ll hear will be your own.

Top 10 Rivers to Fish in Montana

Top 10 Rivers to Fish in Colorado