What To Do In A Bear Encounter With Your Dog 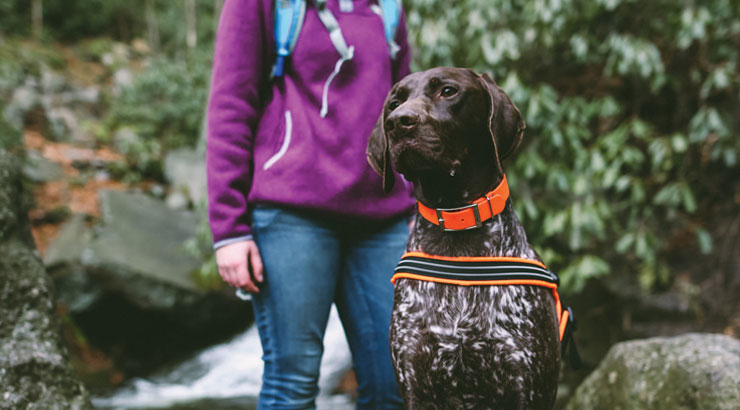 The best kind of encounter between a bear and a dog is no encounter at all. The single biggest problem for a bear—in his territory and in your own back yard—is an unleashed dog. However well trained the dog, or however well he responds to you in a normal situation, it’s not enough in most emergencies involving a bear. And while bear attacks are unlikely and rare, a three-year study of 92 attacks in North America showed fully half of them involved a dog off leash.

Will a dog attract or detract bears? The short answer is, yes. A dog can smell a bear and alert you well in advance that something’s there, which could in turn divert a potential encounter. And a barking dog can discourage a bear from investigating a campsite. But a dog who takes off into the woods after a bear can lead it back to the trail or to your campsite, where it can redirect its hostility on you or other members of your party. The bottom line: an unleashed dog in bear country increases the chances of an avoidable bear encounter.

Read on to learn what to do if you and your cherished canine see a bear to keep you and your dog safe and, better still, how to avoid a bear encounter in the first place.

Dog And Bear Encounter: What To Do

Sometimes an encounter with a bear is unavoidable despite your best efforts to sidestep it. If your off-leash dog charged a bear who decides to retaliate your only recourse is bear spray. But assuming you’re still in control of the dog and the situation has not escalated:

Facts About Bear Behavior: What You Need To Know

Most bears are wary of humans and close encounters with them are rare. Rarer still are bear attacks—a lightning strike is more likely to kill you than a bear. When bears do attack they are usually defending cubs or a food source; these attacks are avoidable and typically involve only minor injuries. Offensive black bear attacks are extremely rare and usually occur in remote areas where bears have very little exposure to people.

Quick Tip: Respect a mama bear—never come between her and her cubs.

Still, forewarned is forearmed: possessing a better understanding of bears and how they behave before you reach the trailhead to hike with your dog will help you know what to do should you encounter a bear.

Quick Tip: Bears’ habituation to people always centers on food sources. They will tolerate people or other bears at close range if they need access to food, whether it is salmon in a stream or garbage in a dumpster. Habituation puts people, dogs, and bears at risk.

Bear Communication – What “Language” To Watch For:

A defensive situation can occur with a mother bear and cubs, a bear defending a food source, or during a surprise encounter. You can expect any of these behaviors:

The bear does not want to fight—it is telling you to back off. Ready your bear spray, speak appeasingly, and slowly back away from the bear. Leave the area immediately.

How To Avoid A Bear Attack

Before you hike or run: Familiarize yourself with the wildlife in the area. Avoid running with your dog on trails notorious for wildlife encounters. Potential predators see running as provocative; it can stimulate a bear’s predatory instinct to chase and attack.

Always carry bear spray, always carry a first aid kit for your dog when you take him hiking or camping with you, and always bring your cell phone.

Make noise: Let wildlife know you’re there by talking and singing—this will help deter surprise encounters, especially near rushing water and where there are limited sight lines:

Stay alert: Leave your phone in your pocket. Tune in to the noise around you instead; listen for approaching animals. Keep your eyes open for

These are all telltale signs of wildlife; ready your bear spray if you see any of them, and report any dead animals to the trail management.

Observe leash laws: Keep an unleashed dog close to you—when he is allowed to wander he may lead a potential predator back to you. And stay on established trails. Leash your dog if you notice any signs of wildlife in the area.

Go at the right time: Remember that bears are more active at dawn and dusk; stick to daytime hiking.

Avoid closed trails: Park staff may have marked them closed intentionally to protect visitors if there is bear or other wildlife activity in the area.

How To Use Bear Spray

Bear spray works by compromising a bear’s ability to breathe, see clearly, and smell, giving you and your dog a window of opportunity to escape a close encounter or charge:

Wind, rain, temperature, and the proximity of the bear can all interfere with bear spray’s effectiveness. Used properly, it is an effective deterrent that protects people, dogs, and bears.

Fully domesticated dogs have no place in the wilderness except closely supervised: unleashed dogs are responsible for many avoidable encounters with bears, and often provoke these confrontations into a much more dangerous situation than necessary. No dog, however large and muscle bound, is a sufficient match for a hungry or agitated bear. If you plan to hike or run in bear territory, the surest way to avoiding a bear encounter is to leave your dog safe and sound at home safe with a sitter. But if he is trail-worthy, keep him leashed and never be without a canister of bear spray.

How to Hike Safely with Your Dog

Tips to Prevent your Dog from Getting Skunked