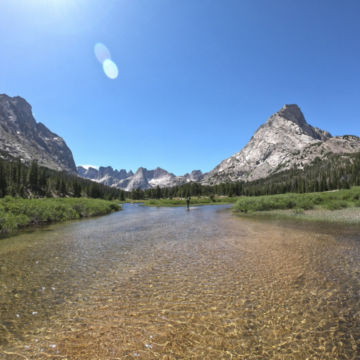 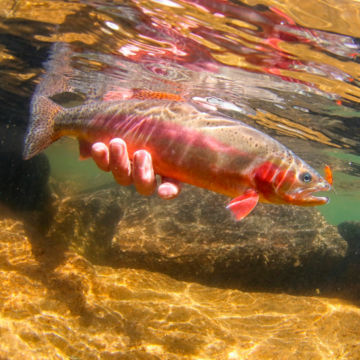 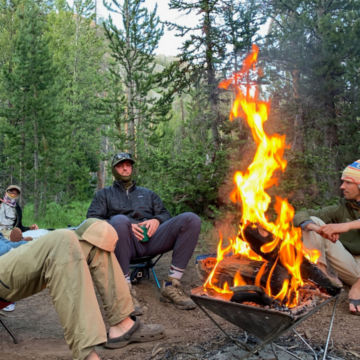 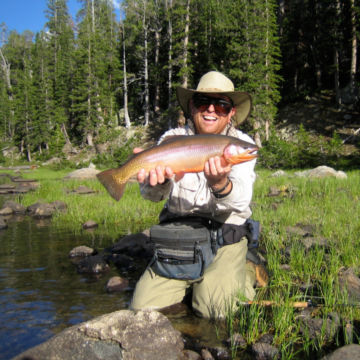 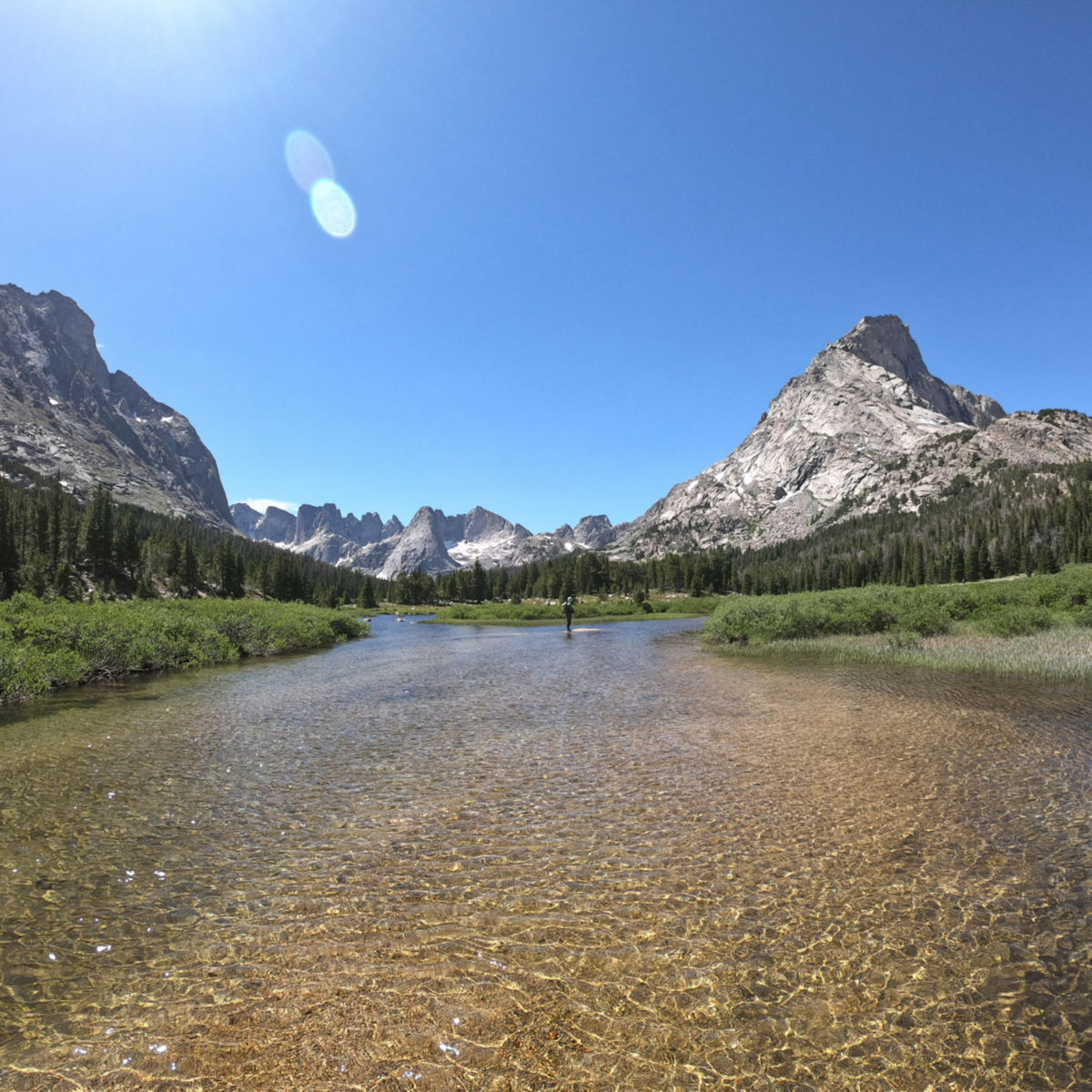 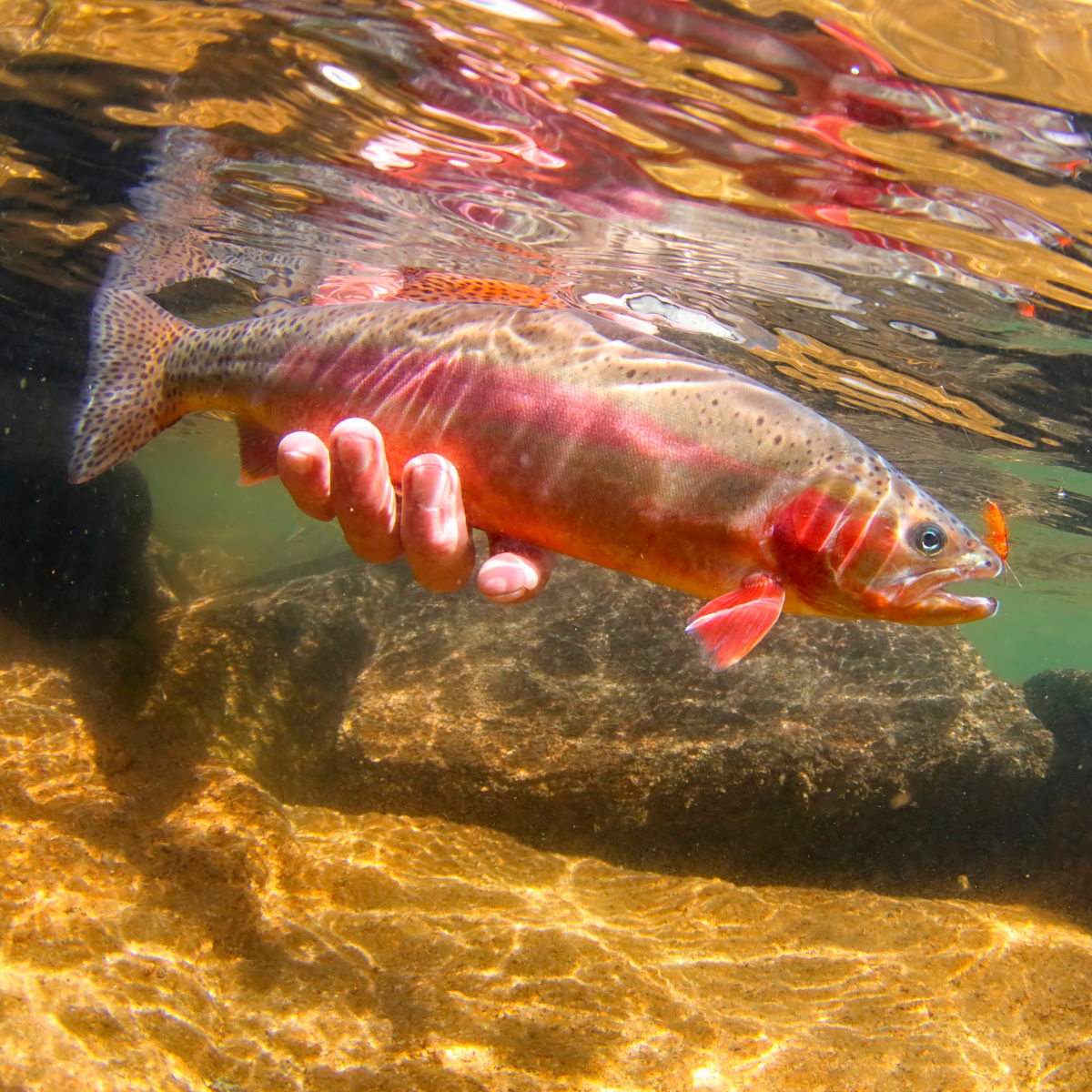 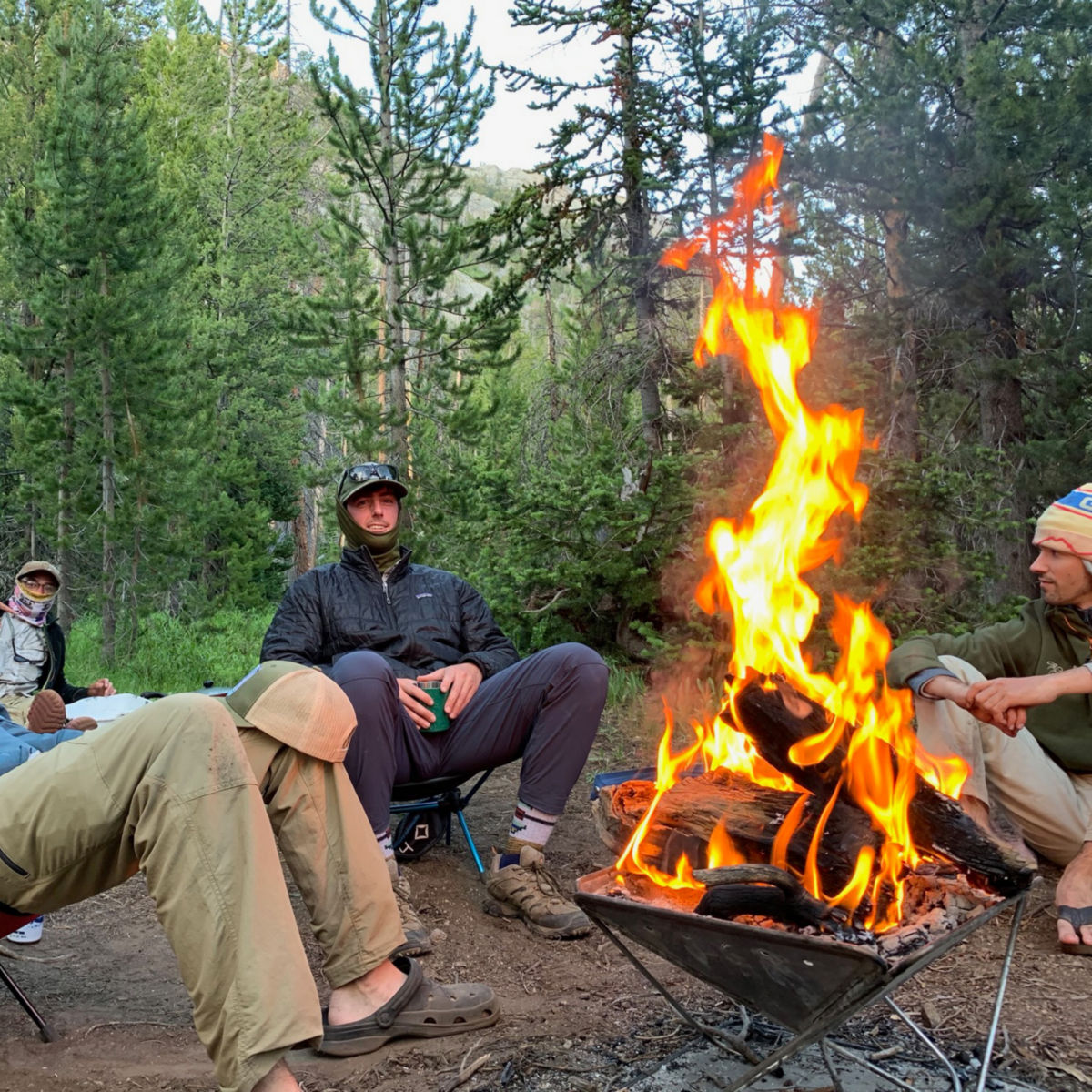 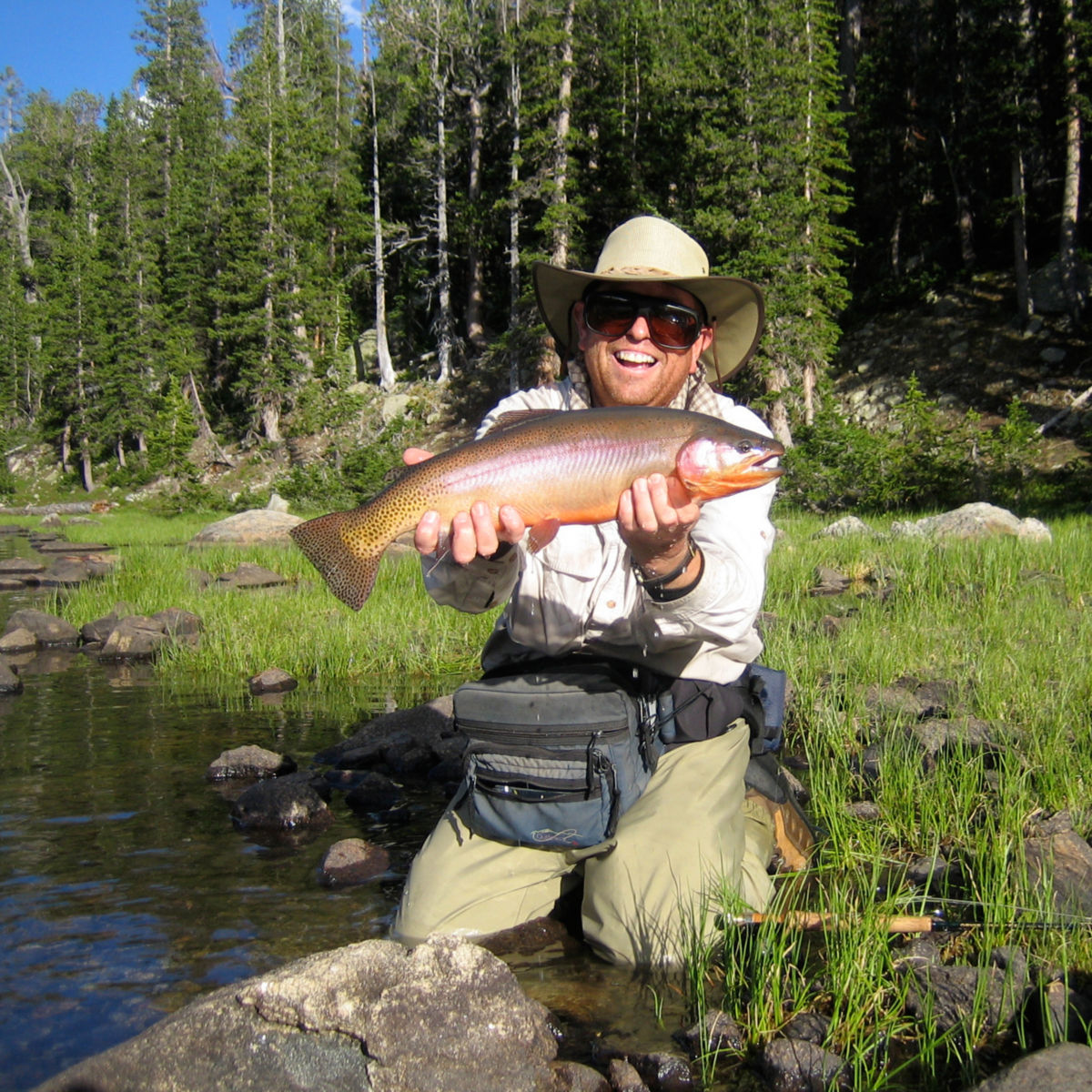 2003 Endorsed Guide of the Year
Looking for the ultimate in seclusion, beauty, and a rustic, uncomplicated lifestyle? Join George Hunker's Sweetwater Fishing Expeditions camping trips into the Wind River Range, often called the best fishing in the lower 48. We do horse and llama-supported trips as well as backpack adventures into this spectacular wilderness with thousands of glacial-carved lakes and connecting streams. You can choose between cutthroat, brook, golden, and rainbow trout (not to mention a few browns and mackinaw. We have been taking fly-fishing trips into the Winds since 1977 and golden trout are our specialty. In the Lander, Wyoming area we guide on the small streams of the area, known for hopper fishing and surprisingly large browns. We also specialize is floating the Bighorn River near Thermopolis, Wyoming in the spring and fall. We take pride in our ability to teach to all skill levels, including beginners. Come join us for a rewarding fly-fishing experience in untrammeled water. Orvis-Endorsed Guide of the Year 2003 and operating continuously since 1977.
What to Expect Water and/or Terrain FAQs

An itinerary for a typical Wind River Mountain Trip:

Arrival day: Arrive at Riverton, Wyoming airport by mid-afternoon. Get pickup by Sweetwater Fishing and transport to Lander. Check gear and pack. Stay in local motel.
Day 1: Leave town early and arrive at horsepacker's base by 7am. Have breakfast. Pack into mountain base camp. Set up camp and go fishing.
Day 2-6: After breakfast, hike to the day's fishing, high lakes or streams, or stay right at camp. Family-style dinner.
Day 7: Pack up and return to trailhead. Drive back to Lander. Spend night in a local motel.
Day 8: Return to Riverton Airport, transported by Sweetwater Fishing. Fly home.

We can provide all fishing gear (including Tenkara rods, waders, and wading shoes), tents, sleeping bags, and pads.

March through November for lowland fishing and float trips on the Bighorn.

Spring: good baetis hatches on the Bighorn. Cicadas on the right years. Summer in the mountains has the whole range of hatches compressed into a very short time—all the way from golden stones and green drakes to PMDs and midges. Golden trout are a specialty, but they don't succumb easily. It’s heavy on the hoppers in the lowlands.

Fall: We still have lots of hoppers around in the low country until they are diminished by frost. We also have clouds of tricos (especially on the Bighorn), followed by a really long season of baetis. Fall fishing is predominantly with streamers on the Bighorn.

Wind River Mountain extended trips are generally at an elevation between 9,500 and 11,000 feet. Almost every species of trout can be found there in the nearly 3,000 glacially carved lakes and the small streams running between. Predominantly, we fish for cutthroat, brook, and golden trout (and hybrids). We access this true wilderness via backpacking, riding a horse, or walking with horses or llamas carrying the gear.

Lander's small streams are at 5,000 feet in elevation and are relatively easy to wade (we often wade wet). This is mostly brown trout fishing.

Our region is high and dry. Most often people say, “I can't believe how good the weather was, especially in the Wind River Mountains.”

March, April, and May: cool and sunny, with the occasional snowstorm thrown in for free.

June, July, August: summer with low humidity, low moisture, and afternoon thunderstorms. Weather in the mountains can present the whole range, from snow to wind, to bright blue. Nighttime temperatures can drop as low as freezing and daytime can feel like 100 (although it is probably only 80). This is "be prepared for anything" country. Lowland streams, including the Bighorn, can expect sunny and warm (occasionally hitting 100).

September, October, November: mountain season ends in September with good possibilities of snow during the month. Lowland streams and the Bighorn often experience a wonderful "Indian summer." Very little precipitation falls during this time, but again we start to experience Western weather, with snow coming in October and November.

How are the bugs?

Mosquitos in the Wind River Mountains can be heavy from mid-July to the end of the month on wet years (some may say monumental).

When is the best fishing?

Right after runoff in our lowland rivers and streams (usually early July). We often have stunning hopper fishing throughout the summer in the small streams around Lander. The best fishing in the high Wind River Mountains is right after ice out in early July.

Thanks for your interest in George H. Hunker, Sweetwater Fishing Expeditions, LLC, WY. Please let us know your questions below and our team will contact you shortly.