The Basics Of Birdshot And Shells For Upland Hunting 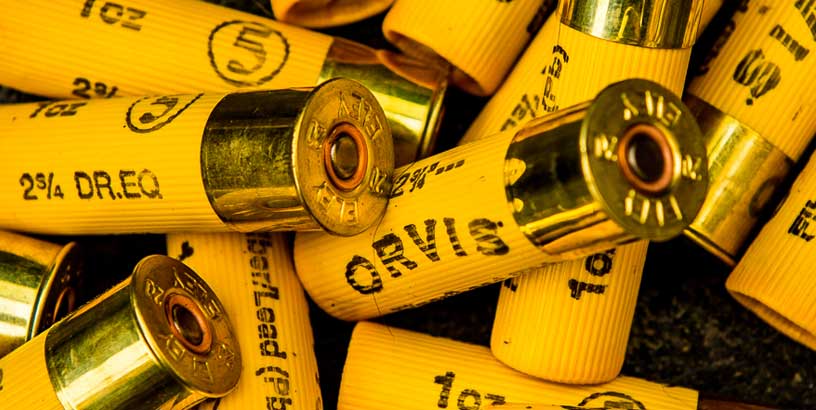 A modern shotgun shell, also called a shot-shell, or cartridge, is measured in gauge, length, shot size, and powder charge. It is constructed of a brass base and a plastic cylinder in which the contents, namely the powder, shot, and wad, are contained. The plastic cylinder is crimped on the top to retain all of the contents and to open freely when discharged, propelling the shot.

Length refers to just that, the overall length of the shotshell. A longer shell can contain more powder and shot than a shorter one, though greater volume does not often equate to greater ballistic efficiency. The shotshell seats inside the barrel and is held for firing in a section of the barrel called the chamber. The chamber is given a certain length correlative to the appropriate length of shot-shell used. Many British guns were built with 2 ½-inch chambers. These guns can be fired only with 2 ½-inch-long shells, which are somewhat hard to find on the American shelves. The most common shell length for upland hunting is 2 ¾ inches, though certain conditions call for the 3-inch shell. These two shells are interchangeable in the same gun, provided that the chamber accommodates the longer of the two. Hence, you can shoot a 2 ¾-inch shell from a 3-inch chamber, but you can’t shoot a 3-inch shell from a 2 ¾-inch chamber. Chamber length in modern guns is often stamped on the barrel, denoted in some variation of the phrase “2 ¾- and 3-inch shells.” When in doubt, if a shell doesn’t seat fully into the chamber, don’t push it; though you may be able to force the shell’s hand, the far safer bet is to switch to shorter ammunition, and have a gunsmith measure the chambers.

Shot size describes the actual size of the pellets that are discharged when the shotgun is fired. These pellets are assigned numerical/alphabetical sizes wherein the shot size decreases as the number increases. Practical upland birdshot (never, EVER, refer to the pellets that kills birds or clays as ‘buckshot’) begins at a 9 or 10 on the small end, descending to a #1, BB, BBB, T, and F on the large end. Though other sizes exist, they are inapplicable for upland game or waterfowl under most circumstances. Birdshot is made either of lead, steel, or a non-toxic alloy. Steel is less energetically efficient than lead, but it poses less threat of environmental contamination. Alloys such as those of tungsten/iron or tin/bismuth perform similarly to lead ballistically, but are non-toxic. Unfortunately, shells filled with alloy shot are often prohibitively expensive.

Powder charge is the last, and to my mind the most alchemic, designation of a shotgun shell. I also find powder charge to be a challenge for simple minds such as mine to grasp. Powder charge refers to the amount of powder contained in a shotshell (modern guns utilize what is known as ‘smokeless,’ as a opposed to ‘black’ powder). The amount of powder in a given shell is sometimes, albeit archaically, expressed in dr. eq. or drams equivalent, but more frequently in grains (a denomination of weight, not volume). A factory shotshell is also typically afforded a measurement of fps, or ft/sec of muzzle velocity as the pellets exit the barrel.

Basically, for every size and shape of pellet, a shotgun shell can create an efficient, or an inefficient, killing pattern. An efficient pattern creates an even dispersal of pellets, maintains good down-range potency, and avoids generating so much pressure inside the barrel that the structural integrity of the barrel is compromised. For this reason, a greater powder charge is not always warranted, or desired. Fast pellets don’t always mean good patterns, or shooting comfort. In general, factory loads designated for ‘game’ or ‘target’ use are sufficient for most of the upland hunting, and target shooting for that matter, that you’ll encounter.

The only other bits and pieces of nomenclature regarding shotshells are brass, primer, and wad. The brass refers to the metal base of the standard shell. Some shooters refer to high brass or low brass shells. In simple terms, a high brass shell often contains a greater powder charge, and a bit more ‘oomph.’ The primer is the circular insert centered in the base of the shell. A primer contains a small bit of explosive material which, when struck by the firing pin, ignites the powder charge, in turn firing the gun; more on the mechanics of this process in due course. The wad, in modern ammunition, is a plastic barrier that serves two purposes: first, it separates the powder from the shot, maintaining the propulsion medium behind the projectiles. Moreover, the wad creates a seal between the powder and the shot that enables the explosive effect of the ignited powder to propel the shot out as a unit, rather than simply push the released pressure through the collection of pellets.