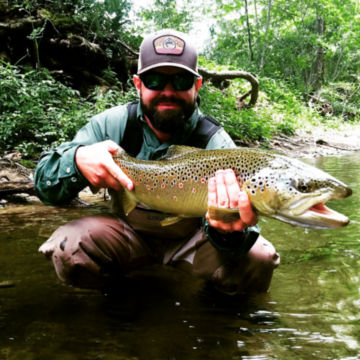 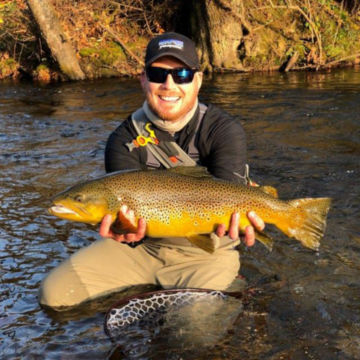 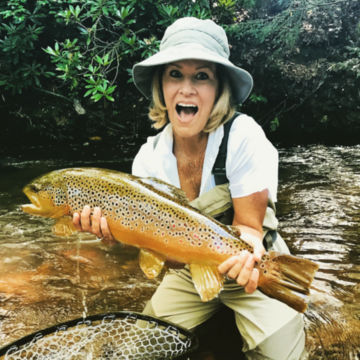 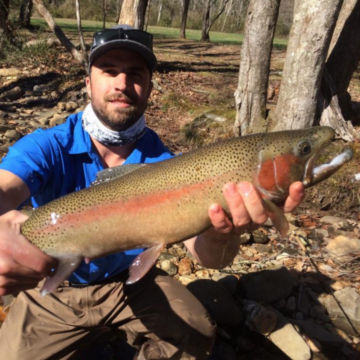 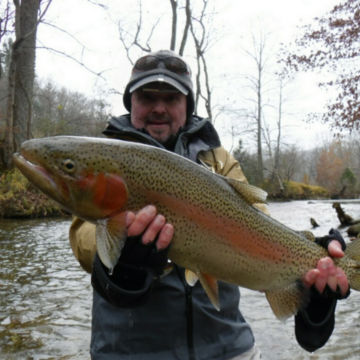 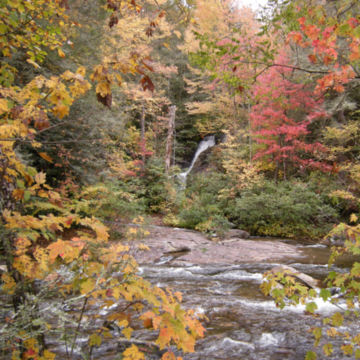 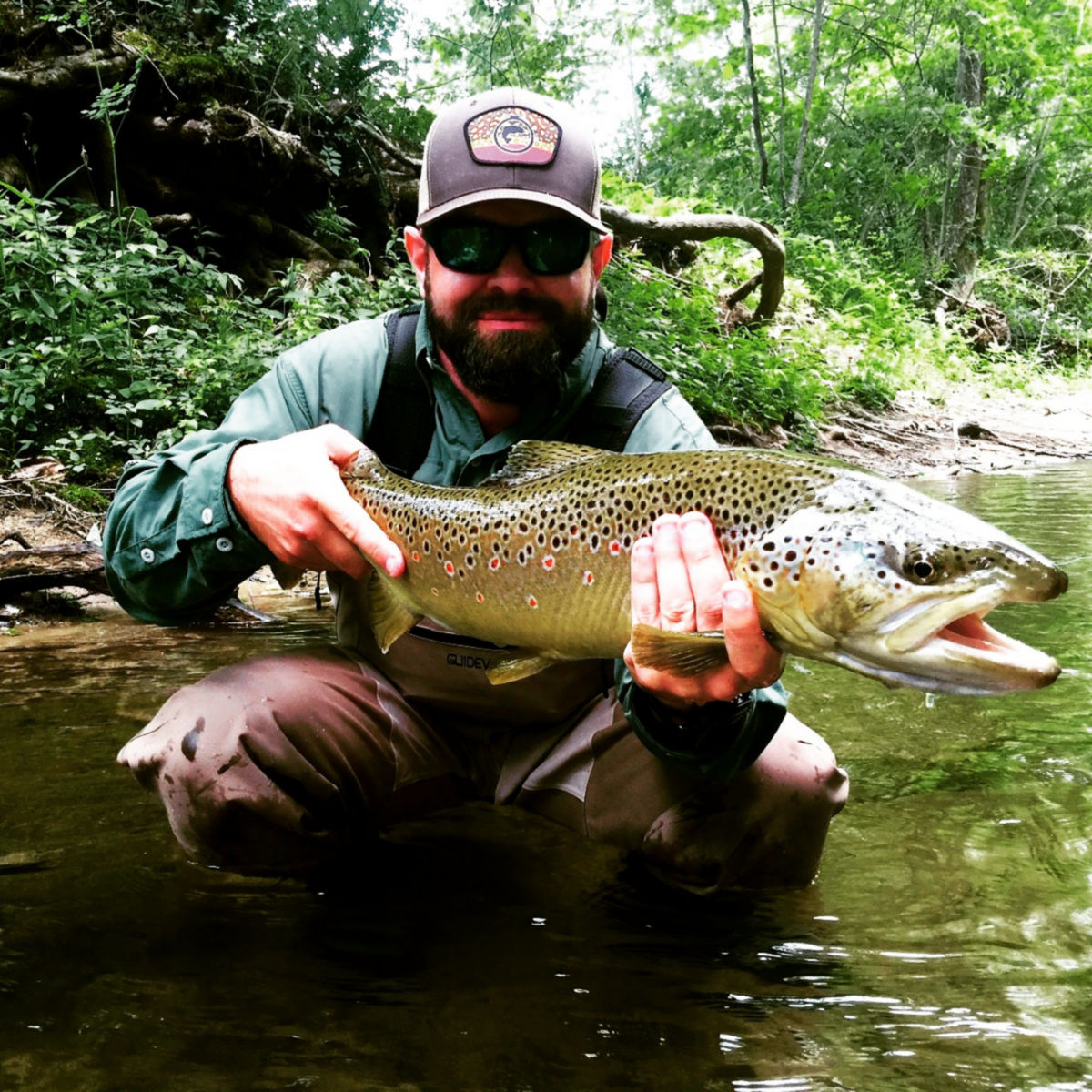 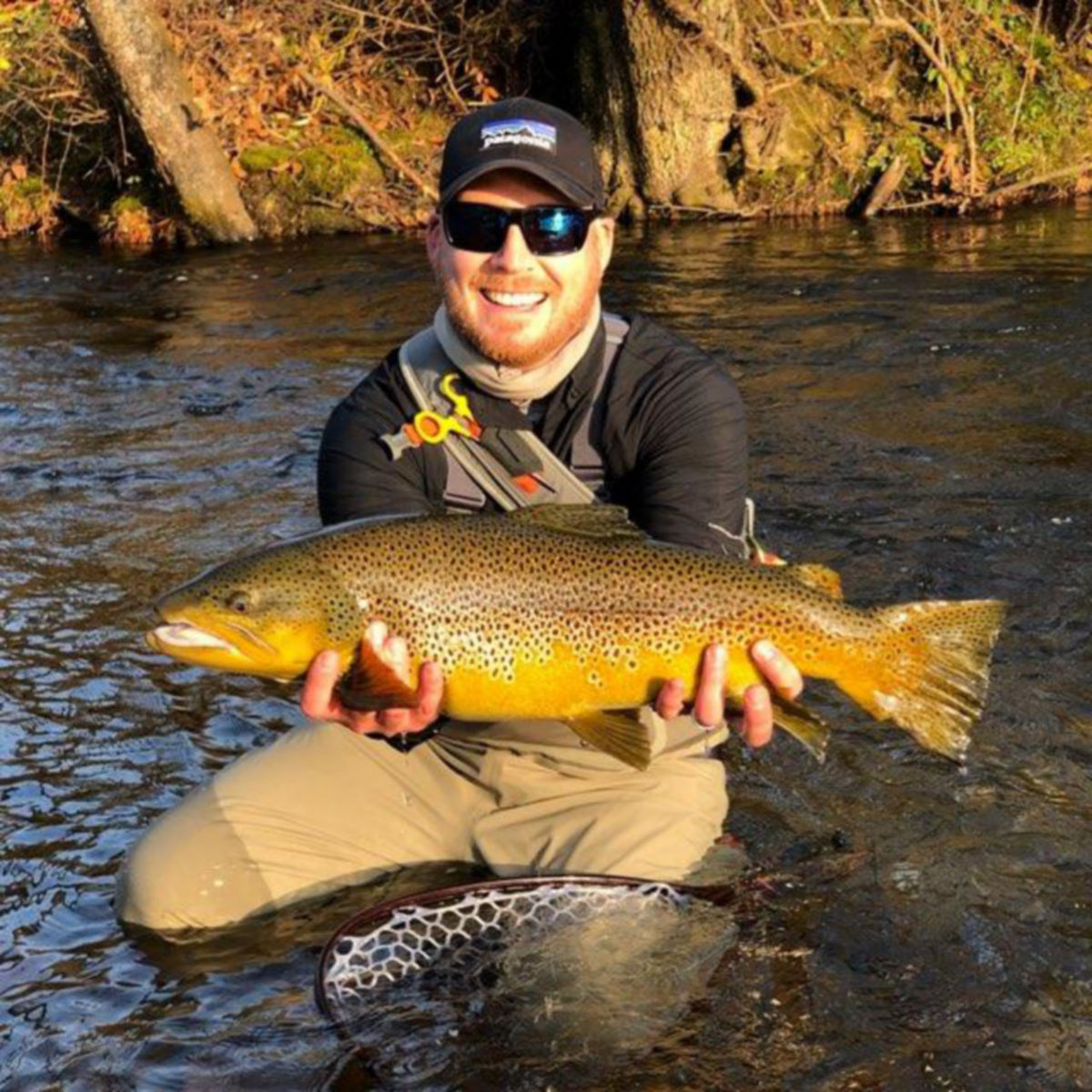 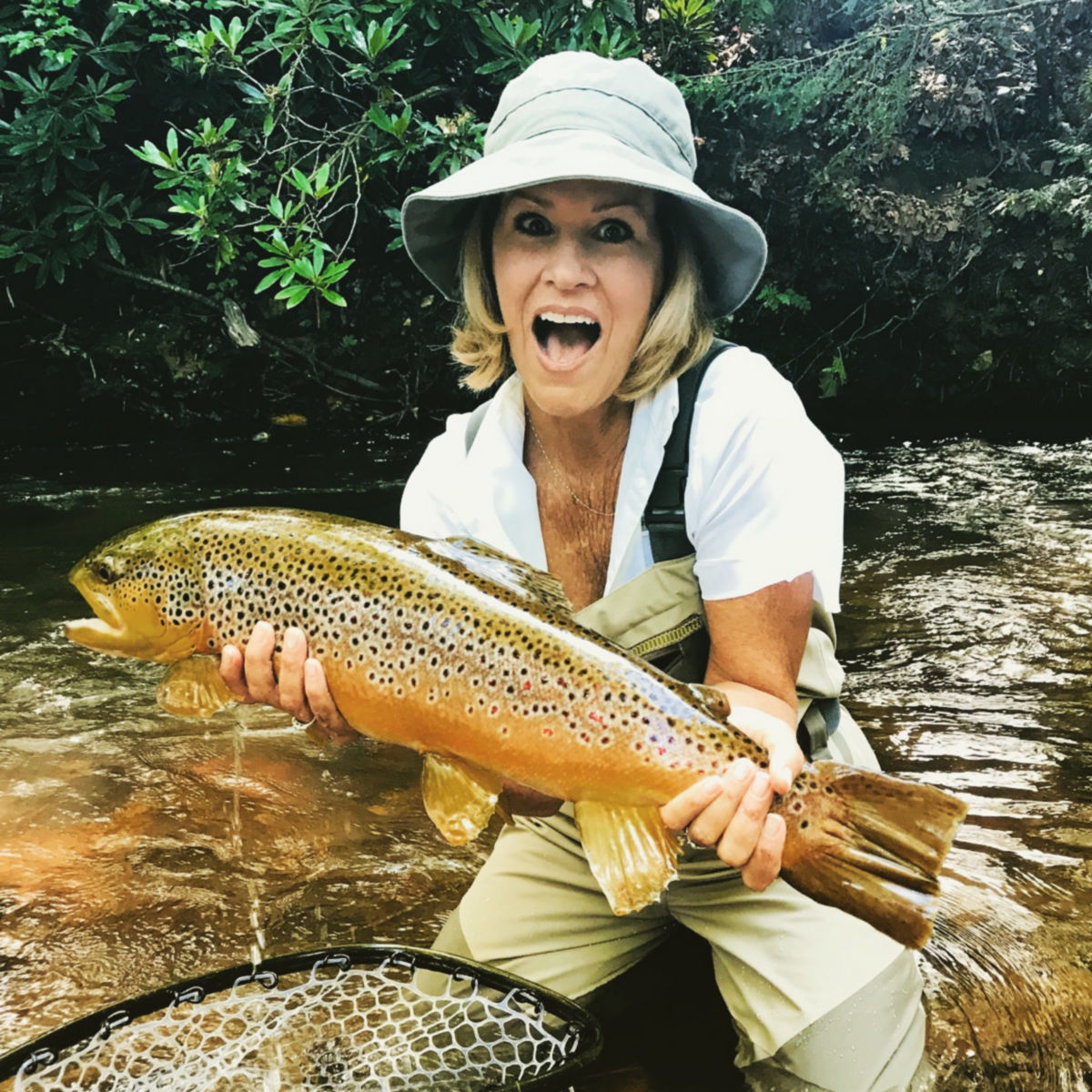 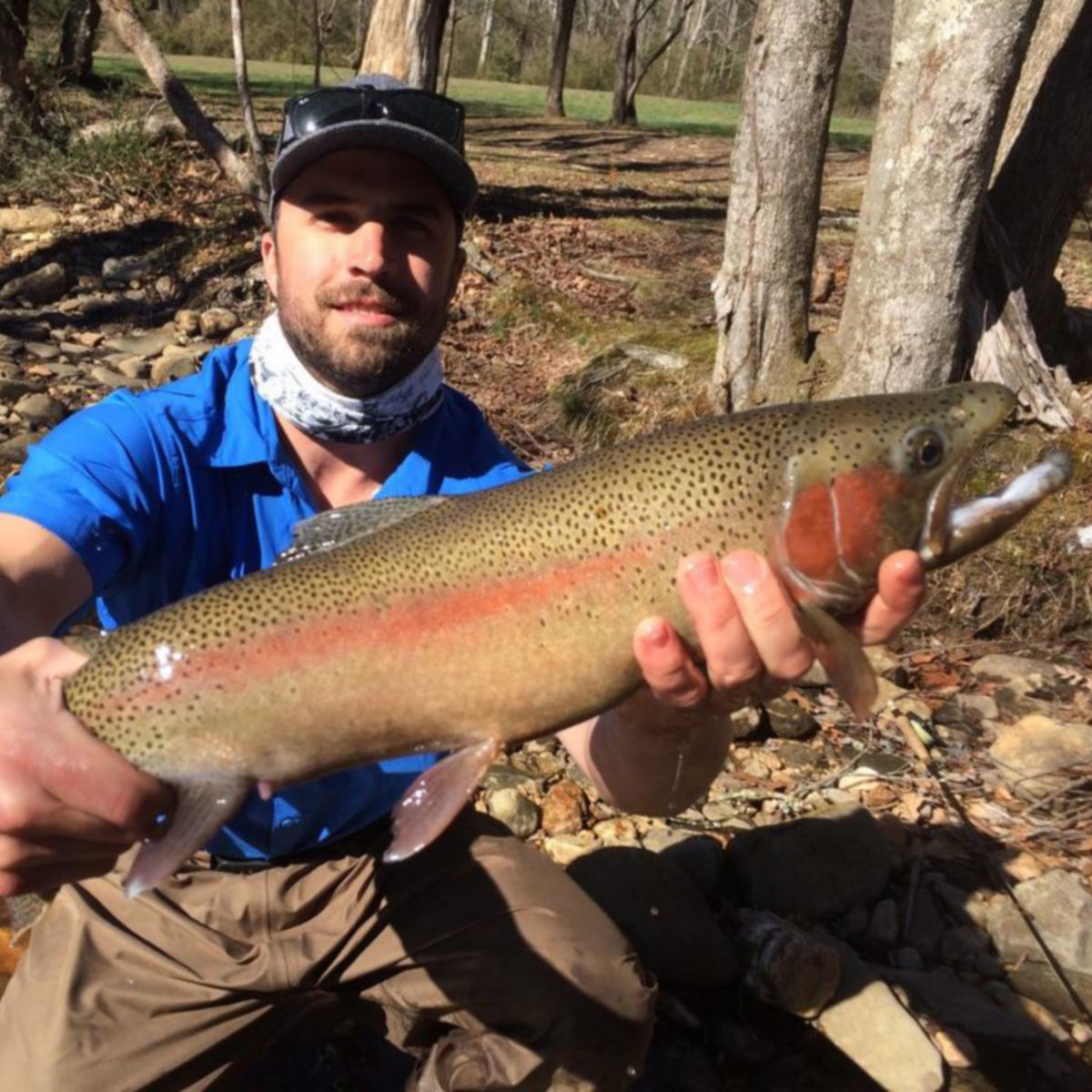 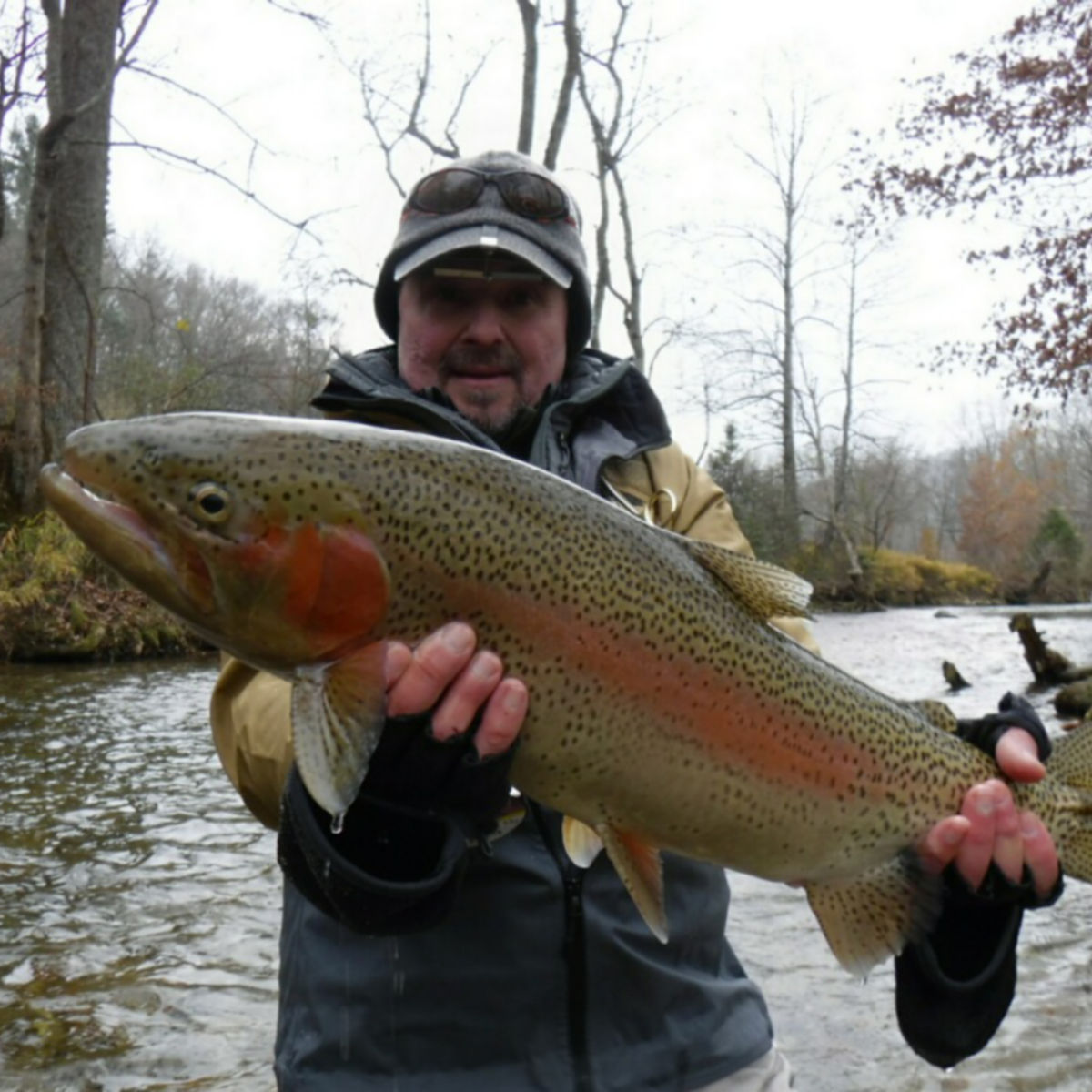 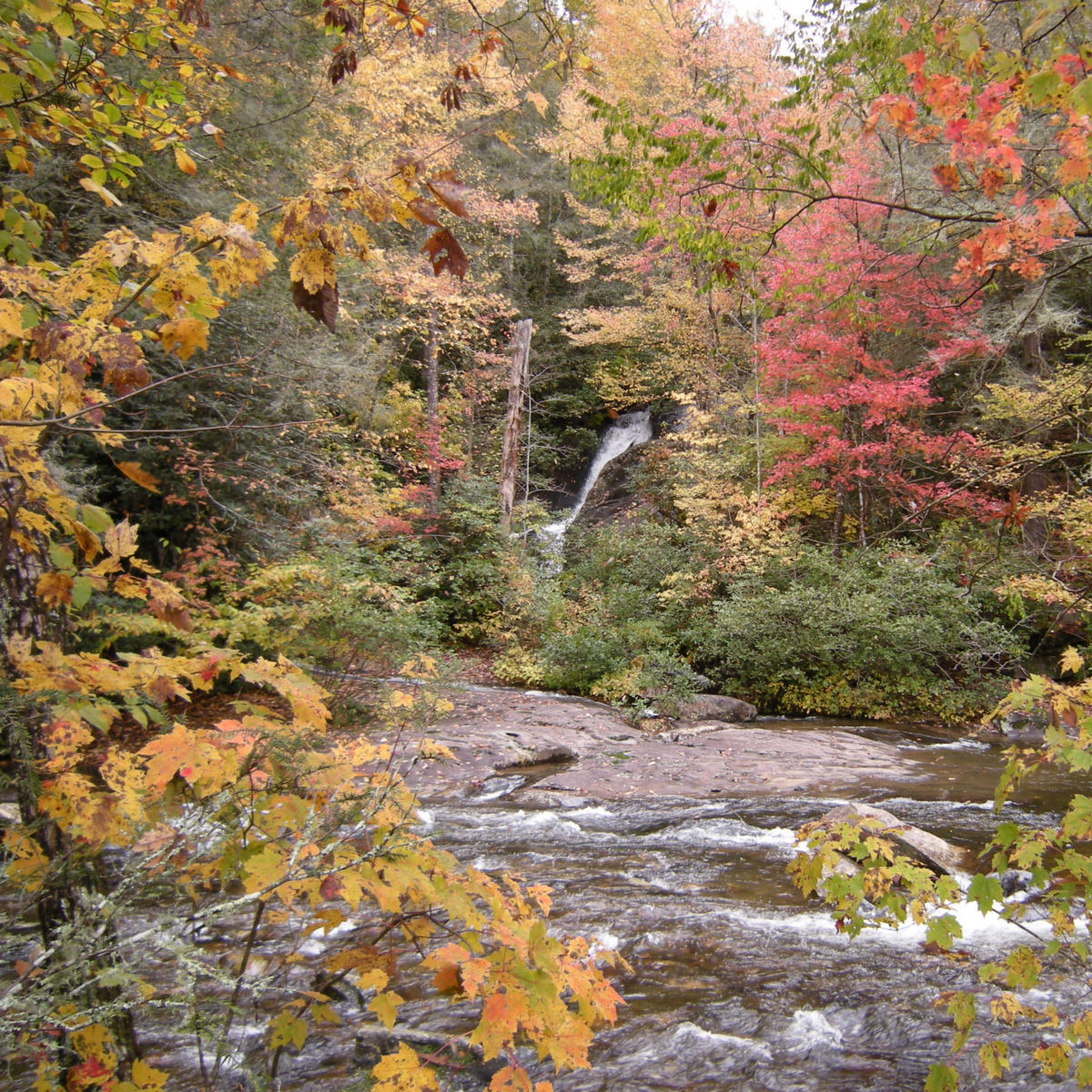 Georgia, being in the deep South, is not that well-known for its trout waters. Many anglers do not even think of it as being a trout destination. People from out-of-state and even other countries are simply amazed at what Georgia has to offer!

Fish high-mountain, cascading streams with towering hemlocks that contain the Southern Appalachian brook trout. Further downstream, we fish for wild and stocked browns and rainbows. Our tailwater will have browns and rainbows with some brook trout if the state has them to stock. We have hundreds of anglers each year that leave us catching their "trout of a lifetime!"

Our guides have been taught to work with beginners to expert fly anglers. You will not find any guides more patient or knowledgeable than ours! All our guides are certified in First Aid and CPR, with several being schooled guides and masters in teaching the "art of fly fishing".

I have been guiding since 1997 and started Reel 'Em In Guide Service in 2001 to share my passion. Today, we have grown from a one-man operation to having sixteen guides. We operate under Outfitting/Guiding Permit #8103 on the Chattahoochee National Forest and can simply take you where others cannot!

On your all-inclusive fly-fishing trip with us, you are provided with everything you will need onstream except a GA fishing license with trout. This includes iced bottled water on all trips and a hearty deli-style lunch on full day trips. We do not nickel-and-dime you to death for flies, leaders, or waders and boots. We provide the best gear and rods that Orvis has to offer! You will also be provided with a highly-trained guide that specializes in North Georgia fly fishing.

We recommend that you bring your own wading gear due to sizing and comfort. Georgia allows felt bottom boots and we recommend them on all our streams. Just make sure they have been cleaned and dried if arriving from out-of-state. Due to marking or floor damage, please do not bring rubber or studded boots on our float trips. We also recommend that you bring your own fly rod if it meets our rod weight recommendation for the stream we will be fishing on. Floating lines work the best here on most streams, but we sometimes use sinking lines on our float trips for streamer fishing.

Always bring an extra change of clothes and towel. You never know when that one slip will leave you soaking wet! To keep from spooking our trout, dress in earth toned clothing and avoid bright neon-colored clothing.

Licenses: Anyone 16 years or older must obtain a Georgia fishing license with trout, which can be purchased online at www.georgiawildlife.com, or if we're fishing in North Carolina, they can be purchased at www.ncwildlife.org.

Unlike many other parts of the country, we can fish year-round. We generally have mild southern temperatures offering good opportunities even in the winter months. Ideal conditions for many people are usually from March through December.

Georgia has a prevalent number of Southern Appalachian brook trout in many of our headwaters. These beautiful char have been here since the dawning of time. Rainbows which were brought here during the early 1900's from the West Coast dominate most of our other waters. The browns were brought here from Germany during the late 1800's and we have these trout in several of the waters we operate on.

North Georgia has over 4,500 miles of fishable trout streams and rivers. And of this, approximately 1,500 miles has natural reproduction. Our mountain ranges in this area are from elevations of 1,400 feet to well over 4,000 feet. All our waters are freestone streams. Headwaters will be cascading with the standard riffle, run, pool configuration. Lower waters will be meandering streams through level valleys. Then our two tailwaters are the Toccoa outside of Blue Ridge and Chattahoochee outside of Atlanta.

Spring is one of our favorite seasons, but it can be wet and cold. Temperatures range from 40 to 50 degrees F at night and from the upper 50 to 80 degrees during the daytime.

Summer is usually very humid with hot days and a lot of sunshine minus those pop-up thunderstorms. Temperatures will vary from 70 to the mid-90's during the daytime. We usually fish the tailwater early or head up to a high mountain stream.

Fall is another of our favorite seasons with cooler temperatures and the changing color of the leaves. Temperatures will vary from 40 to 50 degrees at night and from the upper 60 to 70 degrees during the daytime.

Winter has its ups and downs with some snow in our higher elevations and sometimes too much rain. When water temperatures get below the 40-degree mark, it can slow the bite, but do not be turned away by the cold or a little too much rain. We catch some of our best and biggest trout this time of year! Temperatures will vary from 20 to 60 degrees, so layering is always a good choice.

Rates start from: $175
You can find all pricing information at: www.ReelEmInGuideService.com

North Georgia is full of outdoor activities to choose from in the Blue Ridge, Ellijay, and Dahlonega areas:

Thanks for your interest in Reel 'Em In Guide Service. Please let us know your questions below and our team will contact you shortly.