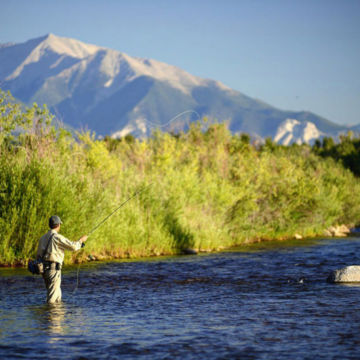 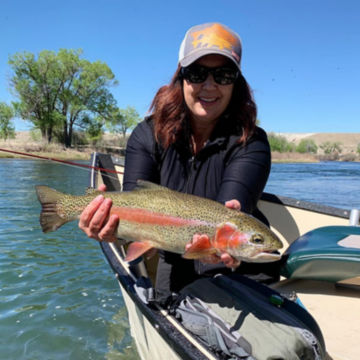 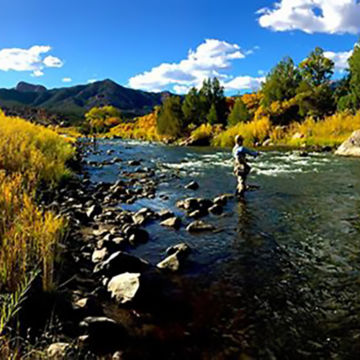 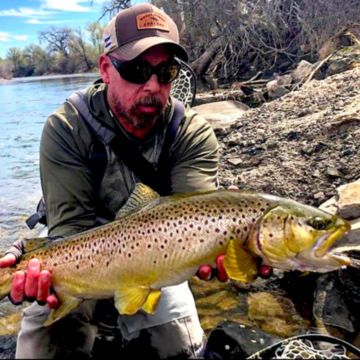 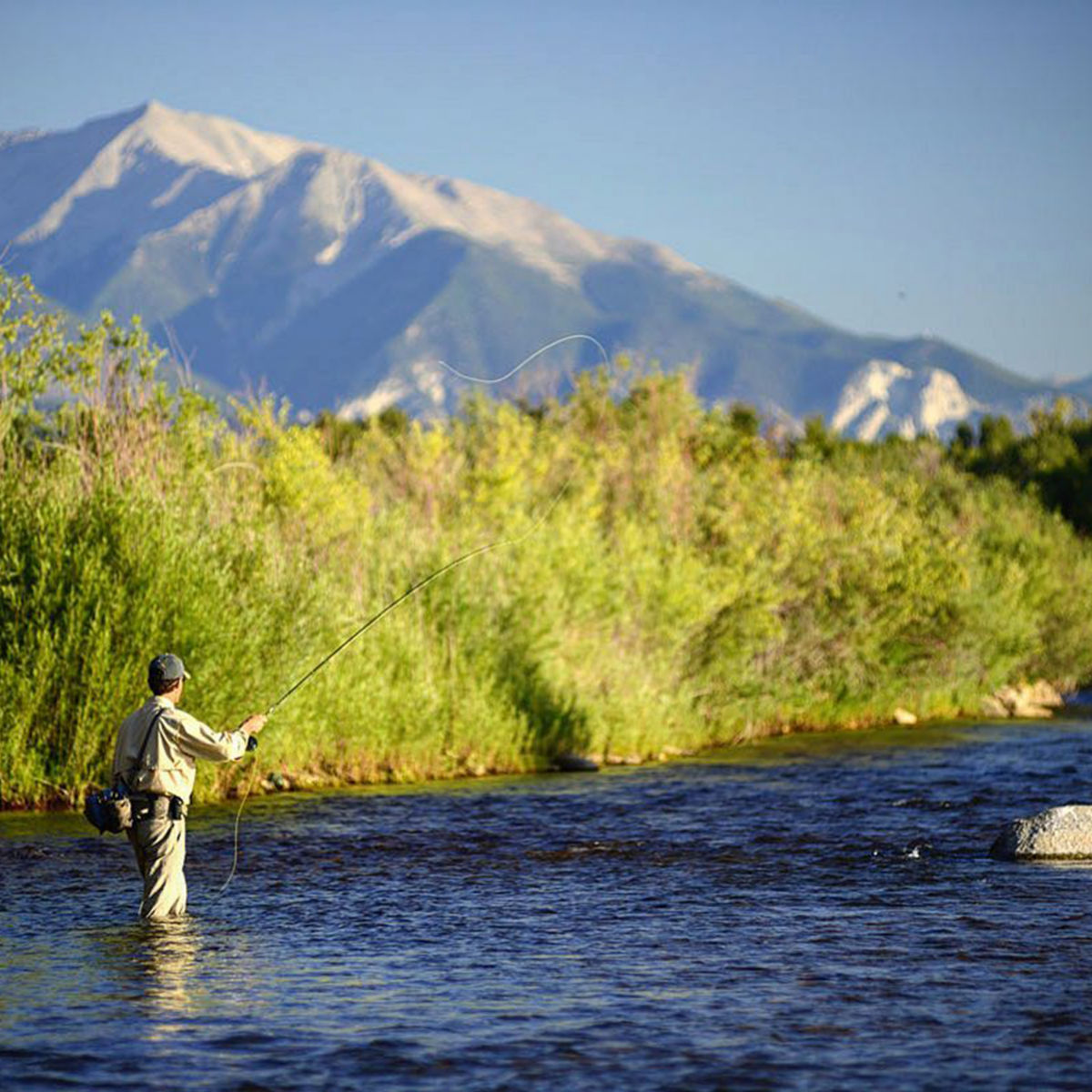 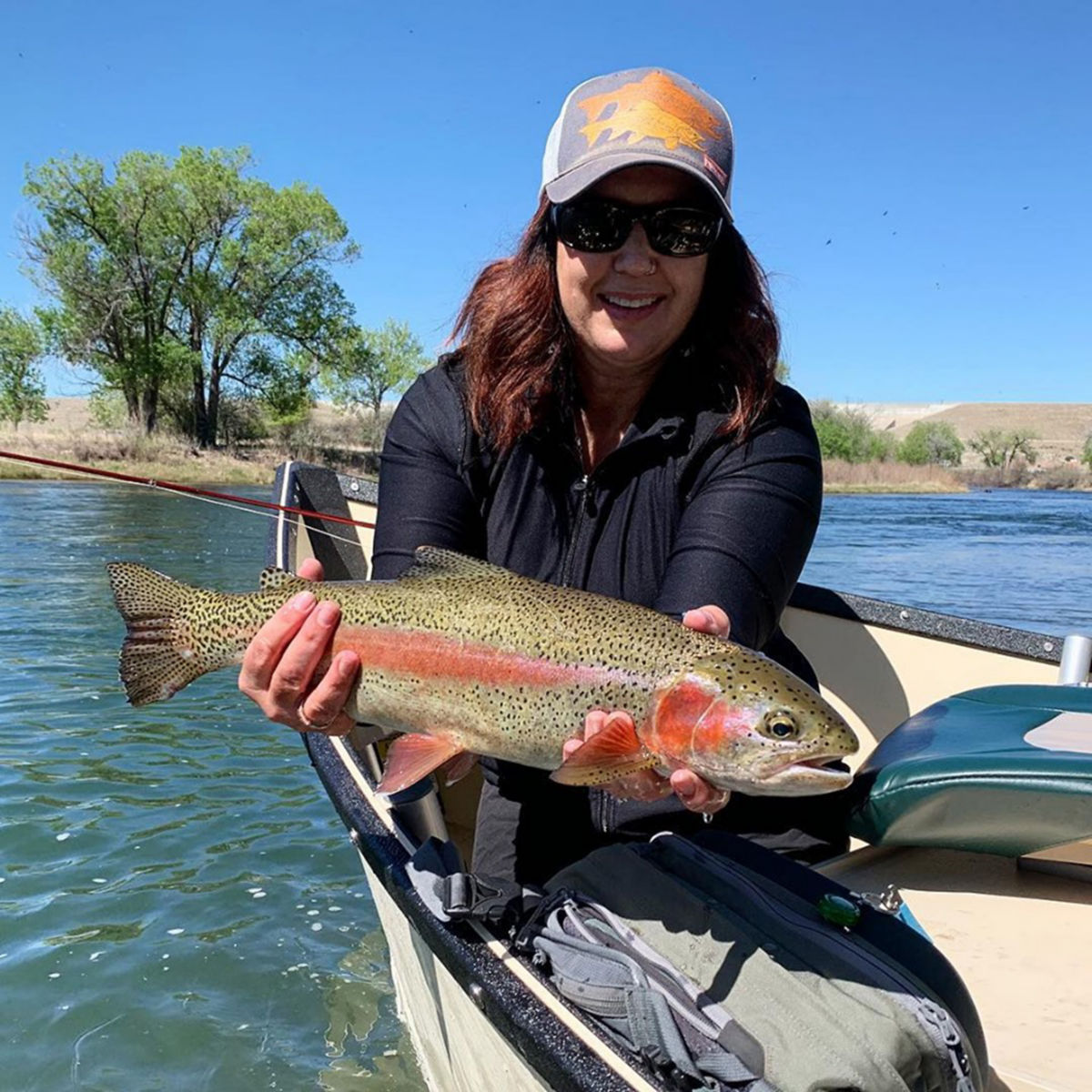 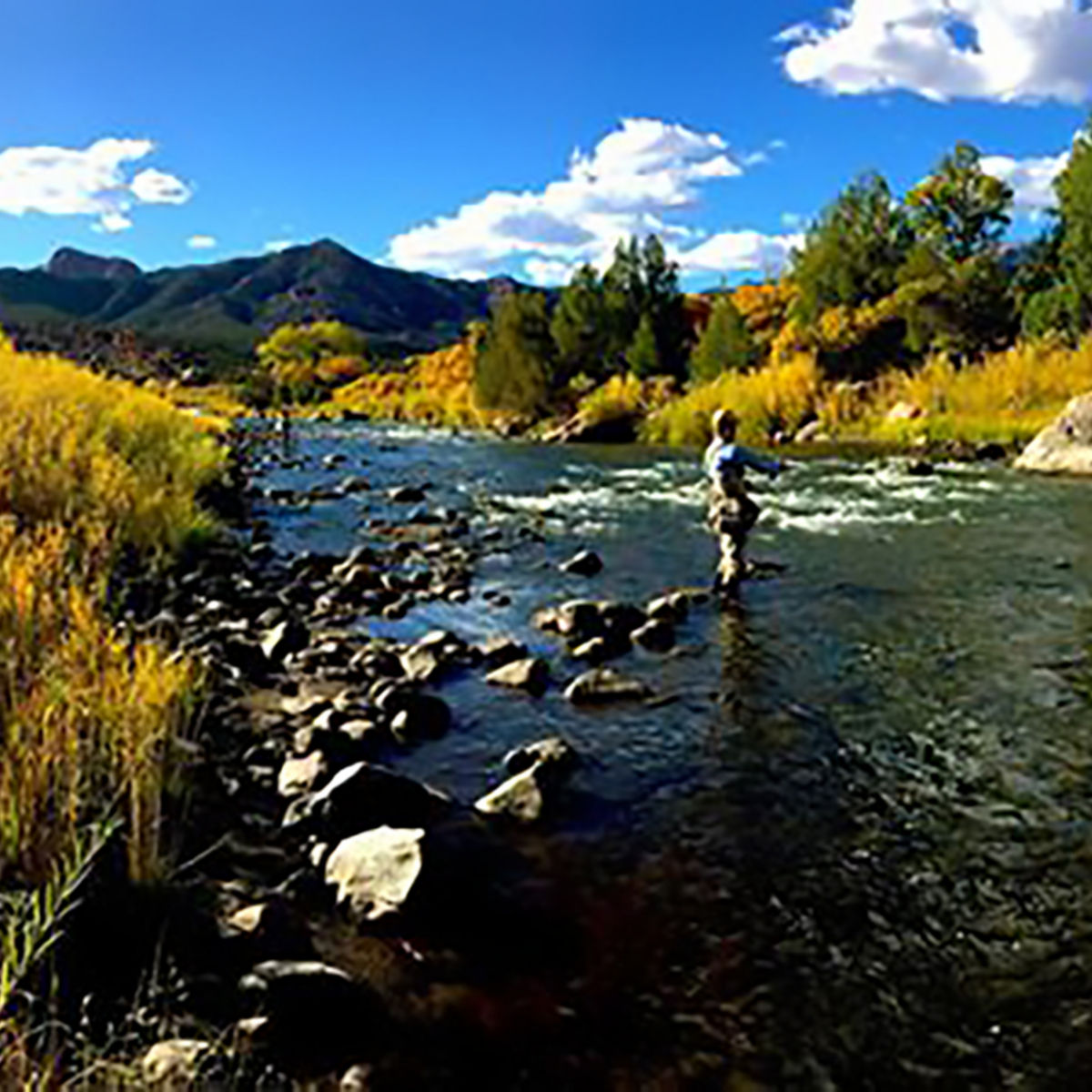 The knowledgeable guides at Royal Gorge Anglers, an Orvis-Endorsed Outfitter / Fly Shop, will help you make the most of your Colorado fly-fishing adventure. At the base of Collegiate Peaks and Sangre De Cristo wilderness sits the Royal Gorge Region. This vast territory offers the most diverse outdoor recreation opportunities in Colorado, with year-around fly-fishing opportunities on hundreds of miles of Gold Medal caliber trout rivers as well as dozens of trophy reservoirs. Royal Gorge Anglers has been operating five-star fly-fishing adventures in this vast trout fishing mecca for over 30 years. Rivers like the Arkansas, South Platte, and Gunnison, just to name a few, are where Royal Gorge Anglers' seasoned guide staff hang their hats, either floating or wading. In addition to the aforementioned world-famous trout rivers, Spinney, Antero, Eleven Mile, and Taylor Park Reservoirs are just a stone's throw out the backdoor and offer shots at a true fish of a lifetime. If you like solitude, Royal Gorge Anglers has access to dozens of high mountain lakes and small backcountry streams that are littered throughout the rugged surrounding wilderness—all within an hour's drive of the fly shop (some less than 10 minutes away). Want to mix in some warmwater fly fishing? The phenomenal stillwater venues of Pueblo and Deweese Reservoirs are just minutes away with opportunities at giant smallmouth bass, largemouth bass, wipers, and tiger musky. This long-standing fly shop and guide service makes every detail count in their interactions with clients at every phase of the experience, which is very evident with return rate of nearly 90%. Whether you'd like a simple half-day or full-day outing or a custom week-long adventure, anything is possible with this operation. We've got the vast variety of fisheries to make it happen. Never touched a fly rod? No problem, Royal Gorge Anglers specializes in instruction within their guided adventures. You'll be comfortable at every step of the process with this exceptional operation and you'll walk away with fly fishing memories that last a lifetime.
Fly Shop What to Expect Water and/or Terrain Rates FAQs

The Royal Gorge Anglers fly shop, located just two miles outside Canon City, CO, has been in operation for over 30 years. Featuring the highest quality brands in the fly fishing industry with a wide variety of price points has always been the mantra. Over 3000 square feet of high-end retail shopping experience is available to the customers who frequent this establishment. Exceptional knowledge of the vast territory they guide in has always been Royal Gorge Anglers' calling card. Up-to-date fishing reports on all major watersheds along with corresponding fly recommendations will always be available at the fly shop or at the Royal Gorge Anglers website. Getting new folks and kids into the great sport of fly fishing has always been the foremost objective at Royal Gorge Anglers, so you'll find many free and inexpensive classes at the flyshop throughout the season in addition to their vast guided trip portfolio. If you're looking for flies, they've got you covered with over 1000 fly patterns in stock and over 200 patterns unique to Colorado watersheds. This fly shop is a one-stop shop!

Rental equipment is available upon request and is all high-end Orvis gear. Wader and boot rental runs $20 per day, per angler if needed. Rod rental and all terminal tackle is included in the guide fee. Flies used or kept are tallied and submitted by the guide for payment within 24 hours of trip culmination, however, all flies are supplied by the guide. If on a full-day adventure, streamside lunch and refreshments are included. Multi-day trips have various meal plan options.

If you wish to bring your own gear it is advised that you bring felt-soled (cleaned prior to use), or studded rubber boots and breathable waders. Typically 8-9 ft., 4-6 wt. fast-action fly rods are most conducive to these fisheries. If you are coming between the months of July and September, wet wading is a great option (using a wading sock and wading boots, rather than waders), due to the comfortable water temperature. Every angler is recommended to bring, in addition: Light rain jacket, fleece layers (upper and lower), heavy Smartwool sock, breathable quick-dry undergarment (upper and lower), hat, polarized sunglasses, camera. Depending on the season, some items may not be necessary, so contacting the guide office directly with any gear questions you may have is advised. If wet wading (June-September), please wear a quick-dry sport short/pant and Smartwool socks.

It would be prudent to bring a change of clothes to change into after a long day on the water along with any refreshments or snacks for the drive home or to your next destination.

The Royal Gorge Region features a year-around fly-fishing season! Known as the "Climate Capitol" of Colorado, this region features strong options on the Arkansas Tailwater and South Platte River in the months of November through February. The larger freestone rivers including the Arkansas River Freestone and Gunnison River move into Spring Primetime in March and fish very well through October. Trophy stillwater opportunities are best in the mid-April to September window. The high mountain backcountry venues offer the shortest window of productive fishing, and it is best to book those options from July through mid September.

The Royal Gorge Region is home to some of the most scenic views and mountainscapes in all of the Western US. Canon City is located in a high arid climate with rugged freestone watersheds. The Arkansas freestone which runs right by the fly shop can be best termed as a wild gradient river with large boulders and limitless pocket water. Just a stone's throw out the back door at the South Platte River and Arkansas Tailwater, you've got calmer more meandering rivers that work their way through vast high country basins. In the backcountry, you might encounter anything from high desert type terrain to heavily wooded high country forests. An angler can be as remote as they'd like to be, with hundreds of miles of rivers and streams and countless stillwater venues to choose from, this massive landscape truly is a fly fisher's playground!

The Royal Gorge Region is the "Climate Capitol" of Colorado, so weather is relatively temperate in the immediate area. The higher elevation one travels to some backcountry venues, high mountain lakes, and the South Platte and Gunnison Rivers, the more variable weather can become. In the prime spring and fall months one can expect temperatures in the 50s through mid 60s F with potential for light rain and snow. During the summer, an angler can expect to see temperatures in the 70s and 80s with monsoon effect rain in August. In the winter months, you can expect to see the widest range of temperatures and precipitation.

Rates start from: $275
You can find all pricing information at: www.royalgorgeanglers.com/guided-fly-fishing/

Royal Gorge Anglers prides itself in involvement with wounded veteran programs, and can offer ADA opportunity to great fly-fishing venues to those with limited mobility. Royal Gorge Anglers operates an exclusive catch-and-release program on all featured fisheries. Royal Gorge Anglers does also offer an on-site lodging option for groups of four or more, for more information please contact the fly shop.

Royal Gorge Anglers has operated as a full-scale concierge for 30 years, and the Royal Gorge Region is littered with incredible activities! World-class mountain biking, whitewater rafting, rock climbing, golfing, and hiking opportunities are the most exciting features in the area. In addition, the largest tourist attraction in the state of Colorado, the Royal Gorge Bridge and Park is 10 minutes from the fly shop. Along with the bridge and park, the Royal Gorge Route Railroad runs through the Royal Gorge and is a great activity for families. If you're in the area in the winter/early spring you can fly fish, ski, and golf within an hour of Canon City!

Thanks for your interest in Royal Gorge Anglers, CO. Please let us know your questions below and our team will contact you shortly.