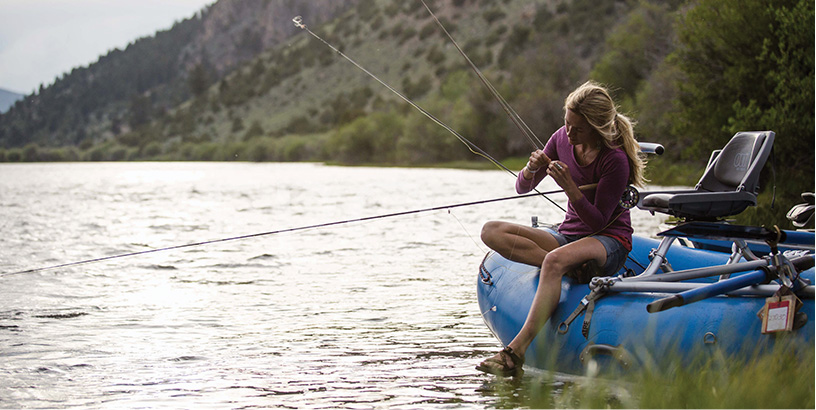 Choosing a favorite river in Montana is like having to choose your favorite child. However, in this case, you have dozens of famous rivers, and maybe hundreds of smaller streams and creeks, which in many ways are as good as or better than their famous bigger siblings. To make a list of the top 10 rivers to fish in Montana, many wonderful waters will be left off the list. So for us to say these are the “top,” we’re simply saying that on any given day, you will be almost guaranteed the experience of a lifetime on one of these ten Montana waters.

In no particular order.

The longest river in North America, the Missouri, called The Mo by those who know it well, is formed from the confluence of the Madison and the Jefferson, and is joined by the Gallatin a mile downstream. From this point, a half hour west of Bozeman, to the Canyon Ferry Reservoir outside of Helena, the Missouri provides trophy trout fishing — especially for browns which swim up from the lake in October. The 35-mile stretch below Holter Dam, the barrier forming a chain of lakes and Canyon Ferry Reservoir, is the focus of most trout anglers, world famous for its dry fly fishing. The Missouri is not to be missed on any fly-fishing trip to Montana.

The Madison offers an impressive diversity of water in its 183 miles of flow. From its thermally influenced water along the geysers of Yellowstone National Park to its boulder-strewn tailwater below Hebgen Lake, pocket water and floatable runs make the Madison as close to heaven on earth as possible. With more than a thousand trout per mile in many sections, the Madison truly stands out when highlighting the top 10 trout rivers in Montana.

The Gallatin is a shorter river by Montana standards. It gathers much of its water from a watershed which extends south and north of Bozeman, then flows west, remaining a small freestone, before entering the Missouri. This float-fish prohibited river rewards waders with smaller, but plentiful trout — especially from Big Sky downstream through the canyon. With plentiful road access through the National Forest and pull-offs throughout, the Gallatin is a great option for a DIY unguided fly-fishing trip in Montana.

Home to the last population of native fluvial Arctic grayling in the contiguous US, the Big Hole River is often hailed as “the prettiest river in Montana.” With its often gentle banks, backdropped by sharp cliffs and snowy peaks, this river is a must-see destination for those looking for incomparable fishing and scenery. The Big Hole forms the Jefferson where it joins the Beaverhead near Twin Bridges, MT. Upstream, it flows through meadows and canyons, providing wade and float-fishing opportunities for abundant rainbow, brown, and brook trout, with an occasional westslope cutthroat appearing on the end of the line.

From its namesake national park to its confluence with the Missouri in northwestern North Dakota, the Yellowstone’s 692 miles flow as the longest free-flowing river in the contiguous US. Its lower reaches provide exceptional warm water sport fishing (including walleye), but the Yellowstone upstream from Livingston is a world-class trout fishery through and through. From trophy cutthroat between Yellowstone Lake and the Grand Canyon of Yellowstone, to the pocket water and floatable sections outside of the park, you’ll find endless access and high trout populations throughout the upper Yellowstone.

Beginning as the Wind River in Wyoming, the Bighorn is quite large (flowing at 8000+ cubic feet per second at high flows) by the time it exits Yellowtail Dam on the Crow Reservation, southwest of Billings. Being bigger water, the Bighorn is only easily wade fished in the spring and late summer, when the flows are lower (about 2200 CFS). However, the best hatches are in late spring and early summer, so whether you choose to hire a guided float trip on the Bighorn, or rent a boat and tackle it yourself, it’s best fished from a boat, rather than the bank. Be prepared for prolific tricos and tiny tippets in the summer.

The Smith River is inarguably a national treasure. With only one public put-in and one public take-out along 59 miles of water, and its blue ribbon trout fishing status, the Smith offers one of the most unique and stunningly beautiful trout fishing experiences in the country. The trout fishing is further boosted by the river’s protected status and permit system, which allows for only a limited number of float trips per season. If you haven’t applied for your permit this season, your next best option to fish the Smith is to book an endorsed Montana guide. While you’re there, remember to do all you can to preserve the wildness of the Smith — in 2016, the conservation organization American Rivers named it one of America’s 10 most endangered rivers.

Unlike the other big rivers on the list (Missouri and Yellowstone), the Clark Fork River drains the Rockies west into the Columbia River and to the Pacific. Not to be confused with the Clarks Fork of the Yellowstone River, the Clark Fork River begins as Silver Bow Creek and on its way to the Columbia picks up water from other famed trout rivers, including the Blackfoot, Rock Creek and the Bitterroot. The Clark Fork has recovered from mining and floods in the early 1900s, to one of the most productive trout rivers in Montana today. Hosting monster wild rainbows and (subjectively) the hardest fighting trout in the state, it should be at the top of your destinations list for your next fly-fishing adventure.

South Fork of the Flathead River

Surrounded by the Bob Marshall Wilderness in northwestern Montana, the South Fork of the Flathead is one of the most remote river systems in the Lower 48. With a dirt Forest Service road accessing only the lower quarter of the South Fork, its upper reaches are accessible only via foot, pack horse, or packraft. Home to a wild westslope cutthroat fishery, the South Fork is one of the only bodies of water where you can target bull trout in Montana. If you’re looking for a remote adventure and wild, native trout, the South Fork is waiting for you.

It’s impossible to determine the best rivers when there are private waters that very few people have ever fished, let alone talked about. How do you get to fish these gems? Unless you know someone who owns hundreds of acres, including private creeks and river frontage, your best bet is to hire a guide or visit an endorsed lodge.

Are you ready to plan a trip to one of Montana’s top 10 rivers for fishing? Begin your planning with one of our endorsed Montana lodges, outfitters, or guides.