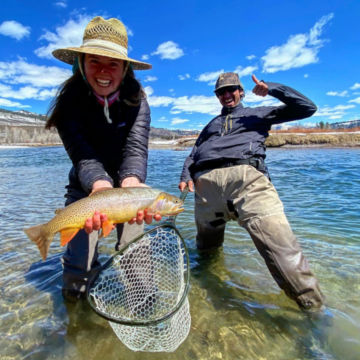 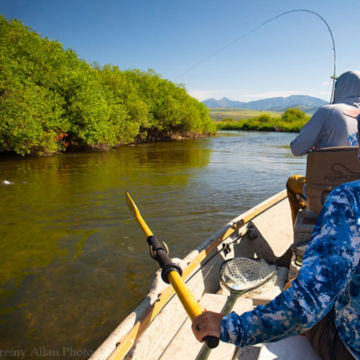 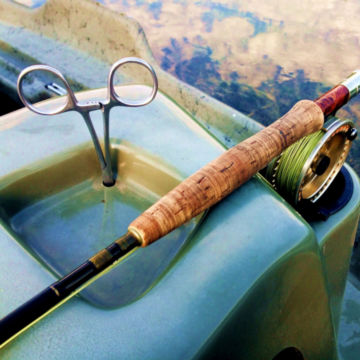 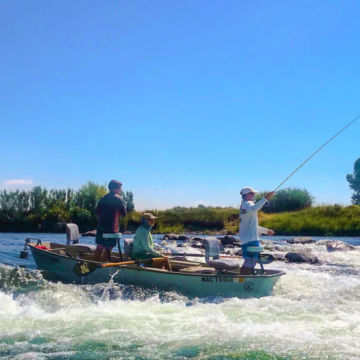 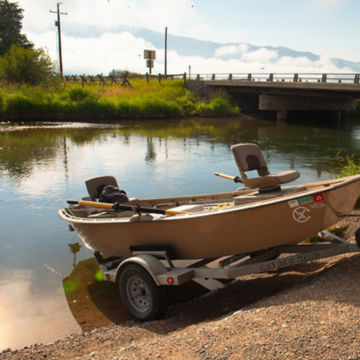 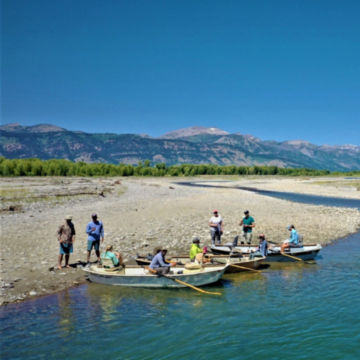 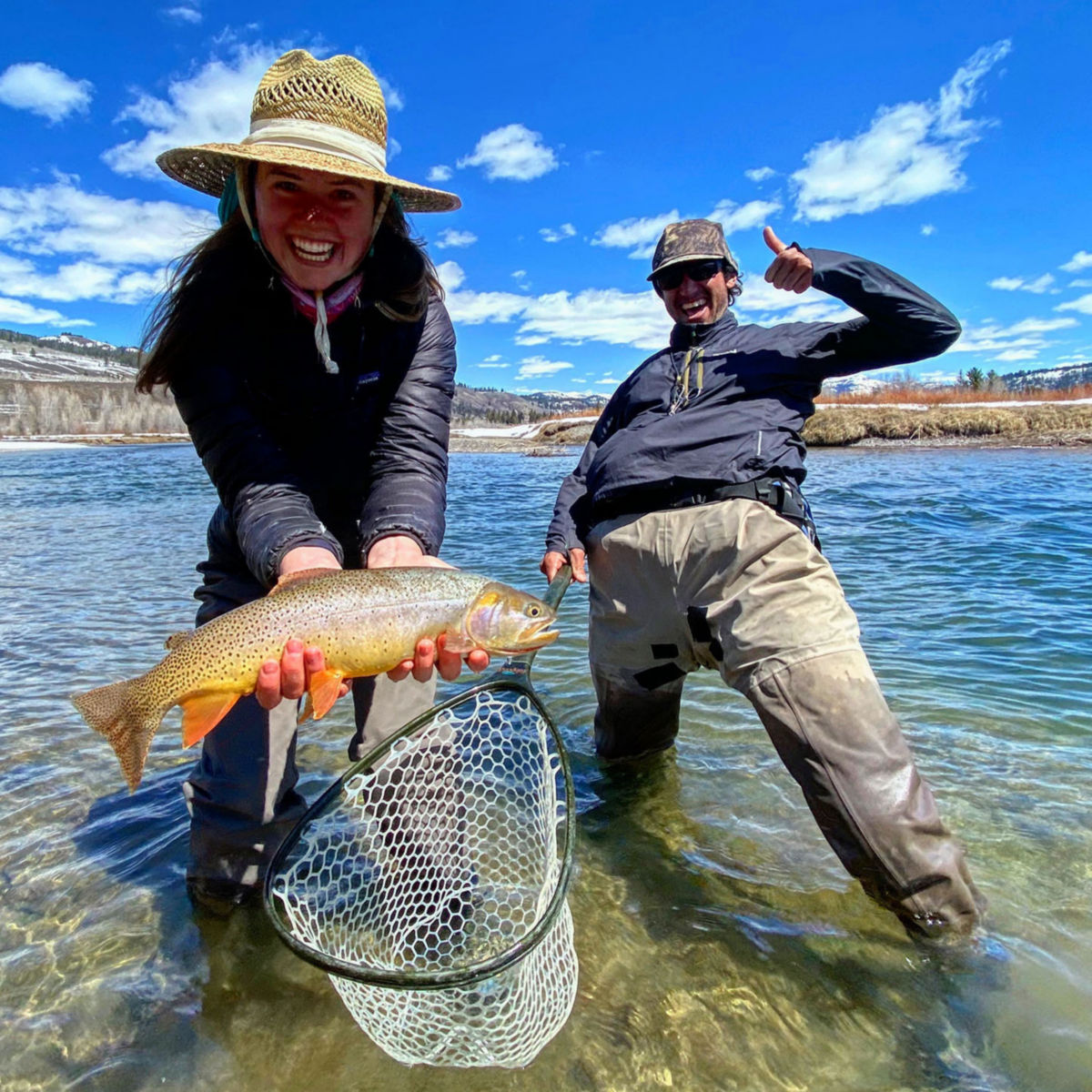 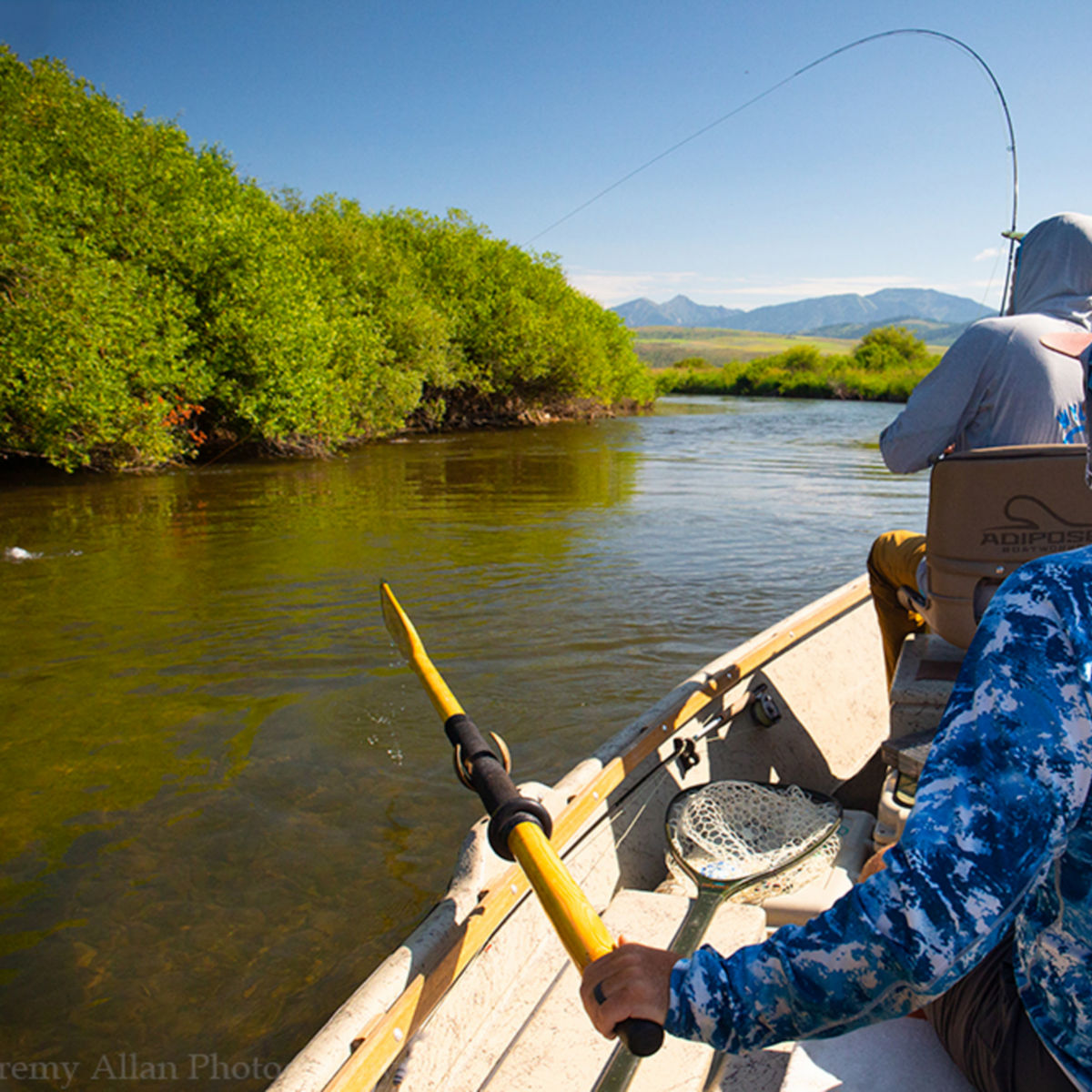 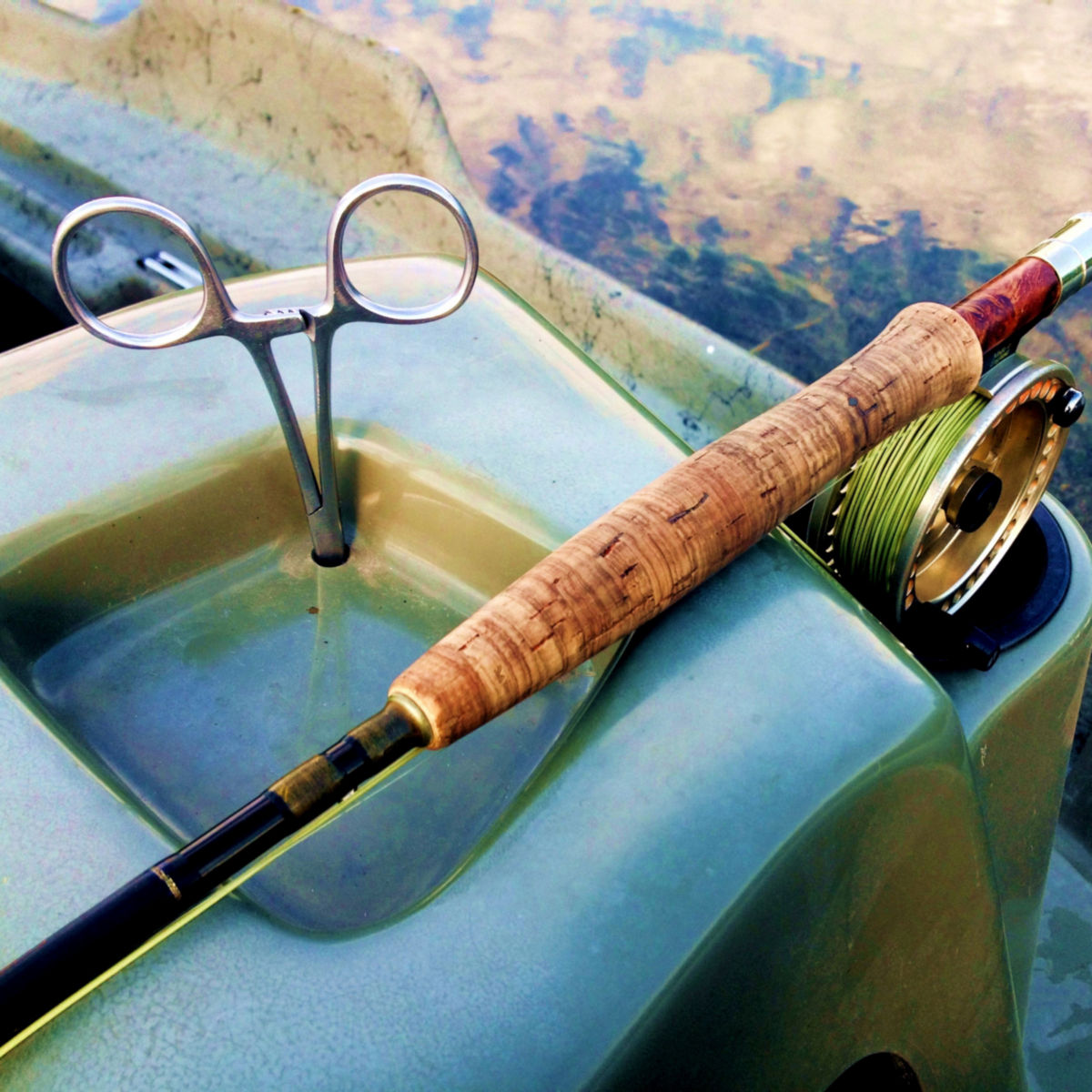 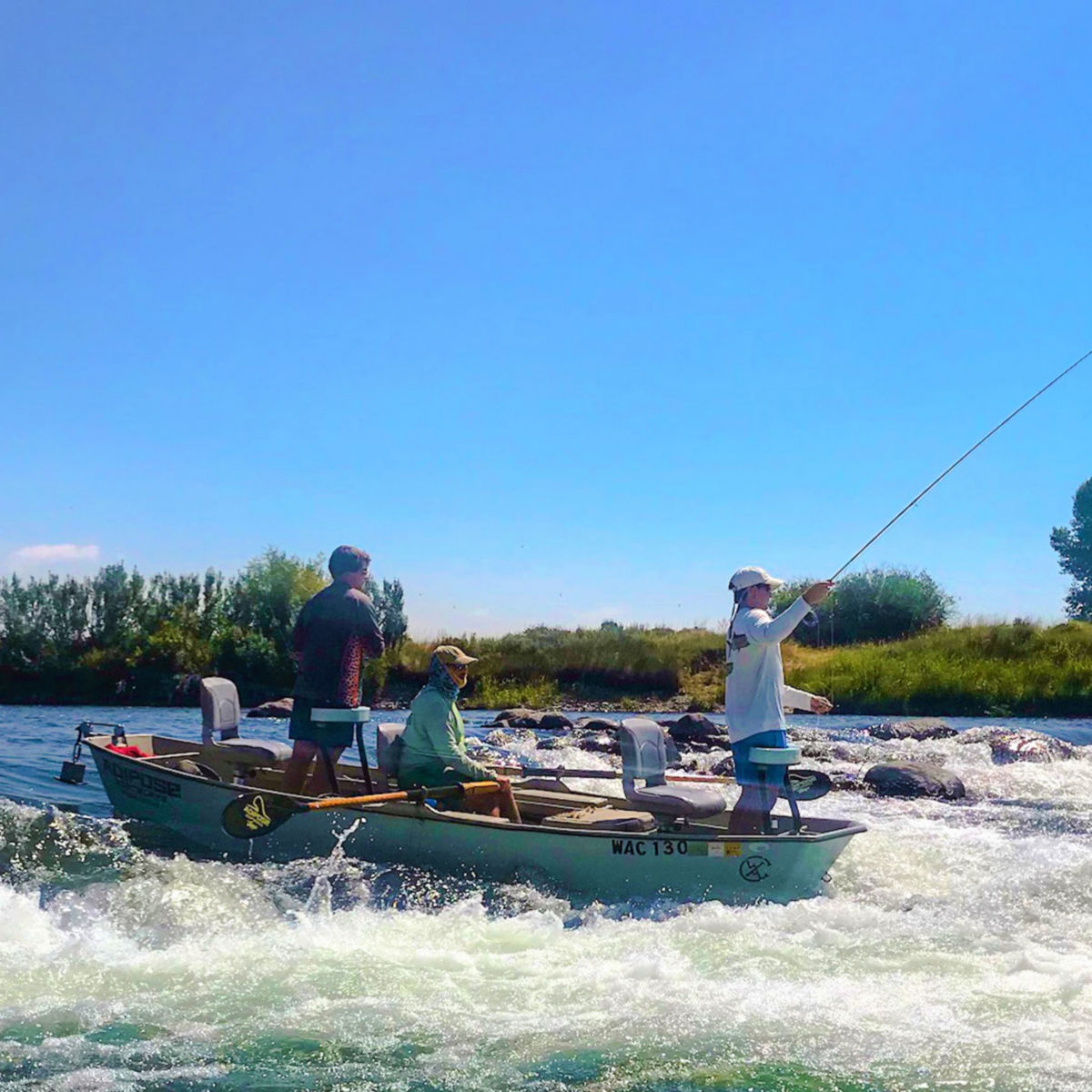 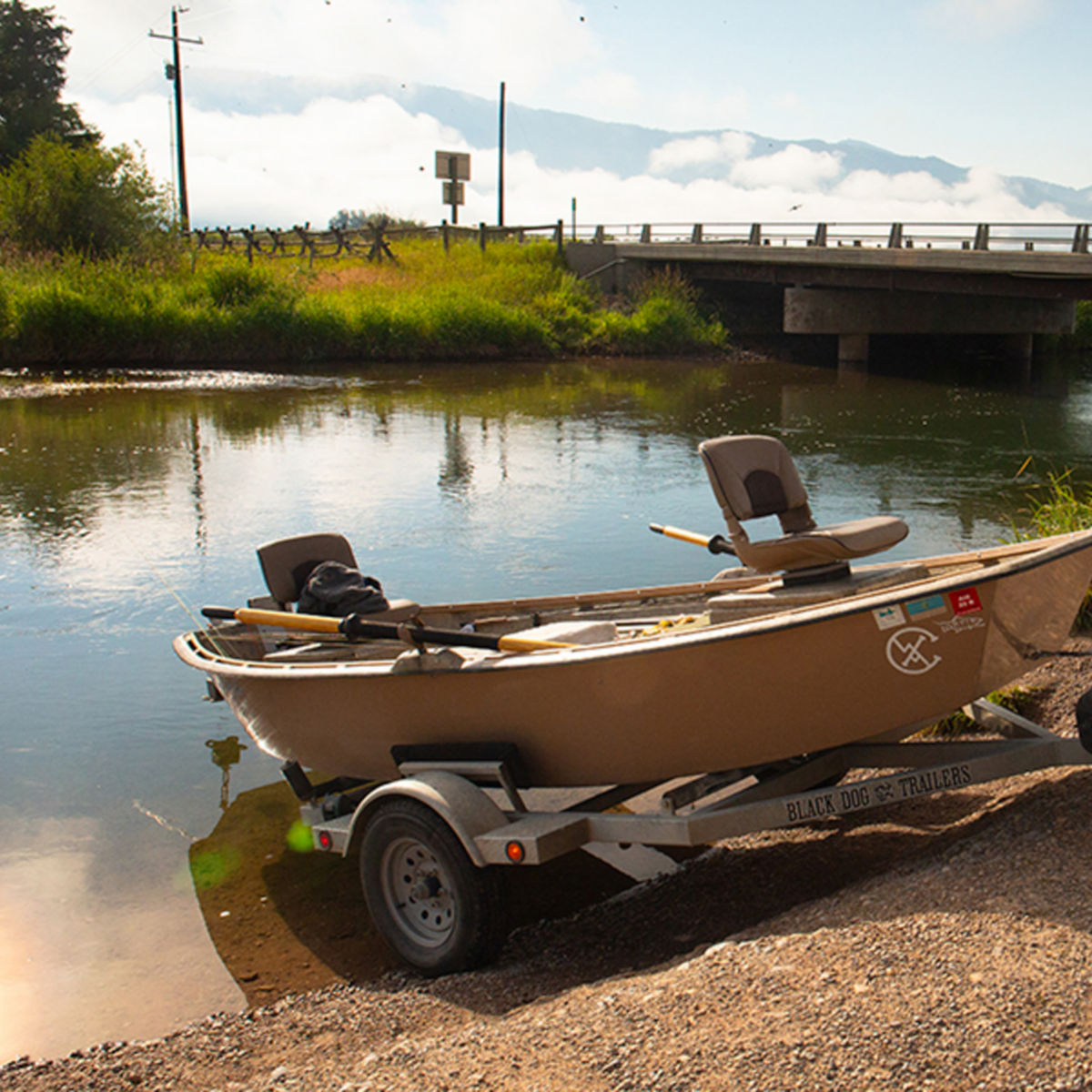 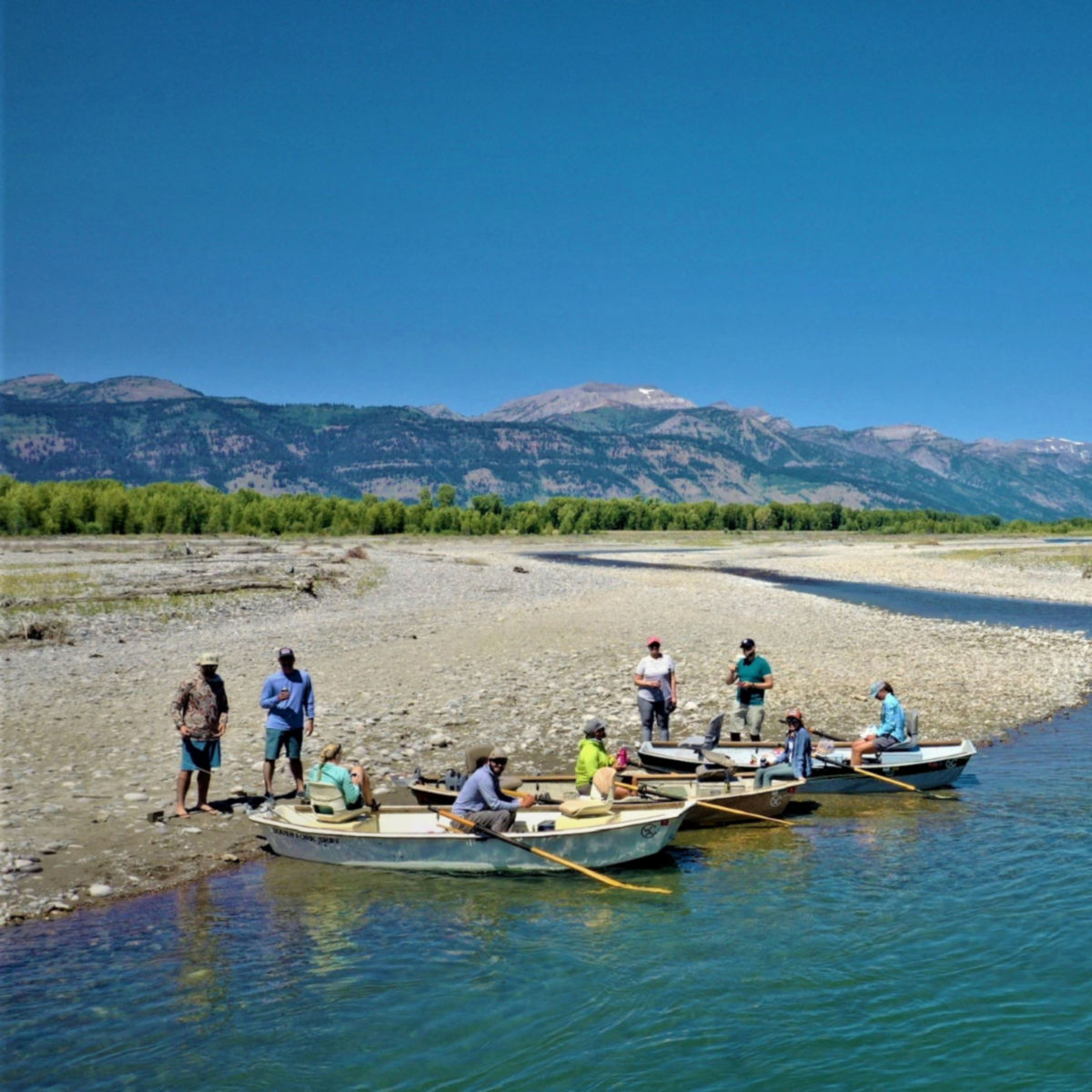 Wyoming Angling Company is an Orvis-endorsed fly-fishing outfitter in Jackson.

Enlist the help of the professional staff at the Wyoming Angling Company, an Orvis-endorsed outfitter, for your unforgettable fly-fishing adventure in Jackson Hole. The history of the Wyoming Angling Company dates back to Dick Boyer's Rod 'N Reel Shop that began offering float fishing trips in the 1960s on the Snake, Green, and New Fork Rivers surrounding Jackson. Rod 'N Reel Fishing Trips was the first Snake River float fishing permit issued south of Jackson from South Park to Explorer Camp/The Elbow, by the Caribou-Targhee National Forest and now managed by the Bridger-Teton National Forest.

In the mid-1970s, Paul Bruun, a guide employee, purchased the outfitting business from Dick Boyer. As fly fishing gained popularity, Bruun renamed his venture Rod 'N Reel Fly Fishing Float Trips. Over the next 40 years, Paul Bruun established himself as one of the industry's preeminent authorities. A fly-tier, boat-designer, guide, outfitter, historian, and author, Paul sold his business to fellow guides and friends, who renamed Bruun's outfit, Wyoming Angling Company—a company that remains dedicated to the same principles and ethos as its founder.

Wyoming Angling Company has a first-class collection of guides and educators. Our guides have decades of experience and are either instructors or graduates of the Western Rivers Professional Guide School, the oldest and most comprehensive guide school in the country. Safety and your enjoyment are our priorities, but that's just the beginning. Our unique approach benefits any angler—from novice to expert—while also providing knowledge of the Greater Yellowstone ecosystem. We hope that you'll leave our waters with a deeper understanding of the region and its resources, with memories that will last a lifetime.

Each guide will provide Orvis fly-fishing equipment, which guests are welcome to use at no extra cost. Fly Fishing equipment: Primary rods are 5- and 6-wt. rods. 4- and 7-wt. rods may be brought along for specific use. Reels with dependable drag systems and floating lines to match rods.

Fly fishing is a wonderful way to reconnect with the natural world. Bring a good attitude and an open mind, and the opportunities for a successful day are limitless. Please communicate your expectations with our staff and your guide to help identify your goals and hopes of success for your day on the water.

Our operating season typically runs from May to October. Early season fishing opportunities run from late March to May, with late season running through November and December. The early and late season options can be a great time to be on the water, and you may find yourself alone with just the fish to keep you company.

The Snake River cutthroat domain provides a unique fishing adventure that delights local anglers and visitors alike. Few other river systems maintain a healthy, wild, strain of the native trout as does the Snake River and its major tributaries such as Pacific Creek, the Gros Ventre, Hoback, Buffalo, Greys and Salt Rivers. Over a dozen different cutthroat trout subspecies survive in the Pacific Northwest, Rocky Mountain, and Great Basin. Biologists agree, the Snake River cutthroat subspecies rank as the strongest, heartiest, and best-fighting member of this easy to recognize trout family.

Snake River cutthroat’s exuberance for surface feeding is so well documented that dry-fly fishing the Snake River enjoys a storied heritage. Cutthroat spawning activity is monitored by the Wyoming Game and Fish Department biologists to ensure the continued health of the Snake’s trout population without stocking. Beginning in February and stretching into July, various Snake River cutthroat strains spawn at different times in their natal creeks. The most resilient Snake River subspecies come from the Bar BC spring creek adjacent to the Gros Ventre River—a dominant trout recently propagated in Jackson’s National Fish Hatchery on the National Elk Refuge. The Bar BC cutthroat display amazing growth and acclimation to streams in other parts of Wyoming as well as in North Dakota, Utah, Colorado, Arkansas, and Missouri.

Over the rim, south of Jackson, you’ll leave the Columbia River drainage behind to greet the Colorado River tributaries, the Green River and its smaller tributary, the New Fork River. These two trout-rich streams flow from lakes and headwaters in the Wind River Range and meander past wagon ruts created by settlers crossing the Oregon Trail.

The Green River (once known as the Spanish River) was originally called Seeds-ka-dee (or big sage grouse) by the Shoshone. It was well-traveled by explorers and trappers who harvested beaver pelts across the Rocky Mountains. Today, anglers use the same waterways to pursue brown trout, rainbows, and several cutthroat trout subspecies. Sometimes twisting, sometimes barreling motocross-like, these rivers cross high plains and sweeping meadows, a rich ecosystem that provides fish with stoneflies, caddis, grasshoppers, and mayflies.

Further west, the Salt River rises from a spring river near Afton, southwest of Jackson, and provides habitat to both brown and cutthroat trout. The Salt River is enjoyable because of its more intimate surroundings including eagles, waterfowl, and wildlife. Resident river brown trout spawn from October through November, while brown trout from Palisades Reservoir spawn in the Salt from December through January. The Salt River is a wonderful dry-fly fishery. Wyoming Angling Company also has a U.S. Fish and Wildlife permit to guide Flat Creek in the National Elk Refuge. Right outside our hometown of Jackson, Flat Creek is a wonderful spring creek with big fish and amazing views.

Summer weather in the Inter-mountain West consists of warm days reaching into the ’80s and cool nights dipping into the ’40s. Weather can move quickly, so it’s always important to bring rain gear in case of summer showers. However, our guides are always well-equipped with plenty of extra foul weather gear. Water temperatures in the summer are cool, comfortable for wet wading. A hat and sunscreen are necessary for protection from the bright sun and the reflection off the water. Spring and fall months can be quite cold in the mornings and warm by the afternoon. You may be even lucky enough to see some snow in our early and late seasons.

You can find all pricing information at: https://wyominganglingcompany.com/wyoming-guided-fly-fishing-rates/

What is the South Fork Skiff?

Wyoming Angling Company values honest and clear communication. Your guide will be directly in contact with you prior to your trip. This conversation with your guide will allow you to communicate your expectations and give you a sense of the day and current conditions. Transportation, the timing of the day, and meeting can be coordinated more specifically at this time.

On all trips, our guides will supply a cooler of refreshments and water. Please bring a refillable water bottle in order to eliminate one-time use plastic products. On full-day trips, our guides will provide a full shore lunch with plenty of healthy food choices for our guests. Your guide will be in touch with you prior to your trip to get a sense of food preference and any dietary restrictions.

We are in the service industry, and our guides work incredibly hard to provide you with a day to meet and exceed your expectations. A customary tip is in the range of 20 percent of the cost of the day.

Thanks for your interest in Wyoming Angling Company. Please let us know your questions below and our team will contact you shortly.