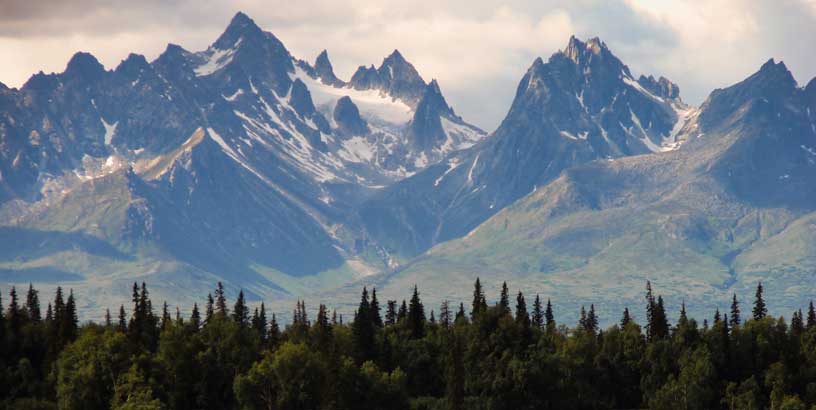 Navigating its way through Southeast Alaska’s Inside Passage, the small luxury cruise ship puts you right in the middle of this jaw-dropping wilderness, so close you can reach out and touch it—with your fly-fishing line, your hiking poles, your camera’s lens, or even your own digits. And however expansive and varied its interior, Alaska’s coastline promises an embarrassment of riches for the marine life enthusiast, the angler, the outdoors adventurer, and the naturalist photographer.

Named a state in 1959, Alaska possesses the largest geographic area in the country (New York state fits inside it a dozen times over), with 665,000 largely unspoiled square miles situated at the extreme northwest of the North American continent. It is home to more than a thousand species of birds, fish, land mammals, cetaceans, and other marine life.

Rainforest, mountain, inlet, and glacier meet in Alaska’s Inside Passage, an interior coastal passageway bounded on the northeast by British Columbia, and protected from the Gulf of Alaska by a chain of islands and sounds. The Inside Passage stretches more or less from the Canadian border in the south to the start of the Gulf of Alaska in the north, just above Juneau and the area around it. And while the Gulf of Alaska is a popular destination for large cruise ships, only small vessels can navigate the verdant and mountainous Inside Passage along Alaska’s southeastern coast, a real treat for the traveler. Read on for a closer look at what to expect aboard a small ship adventure cruise in this extraordinary region.

Why Take An Alaska Cruise?

An Alaska cruise will open your eyes to the sheer vastness of the state, as you take in its emerald forests, snow-capped peaks, waterfalls, glaciers, and fjords: much of Alaska’s coastline is still truly wild. And while the main attraction is the state’s unspoiled scenery, there are still more reasons to cruise Alaska:

In a nutshell, the advantage of cruising Alaska is compressing many of its rich offerings into one convenient package: it could take months if not years to enjoy the same experiences in Alaska by way of conventional travel.

The Benefits Of Cruising Alaska Aboard A Small Ship

Small ship cruises in Alaska promise the traveler a more intimate experience, with onboard naturalists who can explain the flora and fauna in the touring region, more and better opportunities to see wildlife, and enriching ship-to-shore excursions:

Only a small ship environment gives passengers the chance to get to know each other in relaxed, casual surroundings. Overall, expect a more personal experience that allows you to learn about nature and enjoy it: leave your blazer at the office where it belongs.

When To Cruise To Alaska

There is no year-round cruising in Alaska: cruise season runs May ‘til September, when the weather is comparatively warm and the seas are safest.

Experienced travelers will tell you to expect the unexpected when you cruise Alaska: you might need a coat, hat, and gloves during a chilly July or August, or wear shirt sleeves in a balmy September. The rain can fall sideways, or the intensity of the sun can burn your skin; in the end you never know, so be prepared for anything.

Exceptional freshwater and saltwater fly fishing are yours for the taking in Alaska, together with conventional and light tackle fishing. Teeming with more than 600 fish species, Alaska’s waters boast world class halibut and lingcod fishing, with catches of halibut and bottomfish possible from the shore. Salmon fishing begins in May and continues for the entire summer and into the fall; you’ll find cod, salmon, and halibut in the ocean waters around the Prince of Wales Sound, nor is it uncommon to land massive trophy fish in Alaska. Expect to fish these species, along with Dolly Varden char, cutthroat trout, brook trout, and Arctic grayling, among others.

Many species of cetaceans—whales, dolphins, and porpoise—inhabit or migrate through Alaskan waters. While the Bering Sea, Cook Inlet, and Prince William Sound provide habitat or migration pathways for beluga and bowhead whales, along with several pods of orcas (killer whales) and humpbacks, the Inside Passage in particular affords the visitor an opportunity to see orcas and humpbacks during most of the year, together with the occasional minke whale. Gray whales pass by the outer coast of the Inside Passage during their migration from Baja California to summer feeding grounds in the Bering Sea, but some elect to stay along the coast instead for the entire season.

Frequent encounters with Dall’s porpoise, harbor porpoise, and Pacific white-sided dolphins are common in some areas, nor are cetaceans the only animals you might find: fur seals, walrus, Steller’s sea lions, sea otters, river otters, and mink inhabit Alaska’s waters, to say nothing of the plentiful marine bird species you’ll spot.

Most hiking opportunities in Alaska exist in the comparatively flat valleys left by the glaciers, with uphills defined primarily by gentle gradients, and rivers and streams with wide banks. Because of this topography, most hikes are relatively easy. Elsewhere a wide variety of terrain in Alaska promises a richly varied hiking landscape, including dense, moss-covered spruce forests, above-the-treeline rock and rubble, dramatic flower-covered glacial moraines, and washed-out river beds. August in Alaska presents an incredible canvas of wildflowers and a variety of lush ecosystems; you’ll also have an excellent chance of encountering any of Alaska’s non-human residents on a hike—your guide will advise you on safety protocols.

Climbing aboard a kayak puts you right at eye level with Alaska’s natural beauty and wildlife. Best of all, even a novice can quickly learn the basics and get underway with paddle in hand. You’ll be in the best possible place to view marine life just below the water’s surface, to say nothing of cetaceans and other marine mammals, for example otters and sea lions, above it. Kayaking close to the shore affords views of wildlife including bears, goats, and moose, along with marine bird species. And because kayaks are quiet, the wildlife is likely to come closer to you.

While it does take some effort to pilot a kayak, it does not take much for a brief, leisurely out-and-back tour: if you can handle a good walk, you can handle a kayak. And if you’re in a two-seater, your paddling partner will help share the work.

Professional and amateur photographers alike will find no paucity of subjects on a small ship adventure in Alaska; possible sightings include birds, land and marine mammals, fish, and tide pooling creatures. Before you go, familiarize yourself with your camera equipment and how it works, and study up on the wildlife species you’re hoping to shoot (practice at home on the birds at your backyard feeder or ducks in the local park).

Peak insect season is June and July. This is when you’re likely to encounter Alaska’s legendary mosquitoes, and also annoying noseeums and black flies. There’s no health risks beyond allergic reactions, but you’ll feel better if you keep your skin covered and use a DEET repellent.

Take a small ship cruise in Alaska for the fishing and kayaking, the hiking and the beachcombing, or simply to enjoy the abundant wildlife, but by all means, go. Call it a bucket list item if you wish, but a small ship adventure in Alaska beckons you to come again, and bring your entire family for an unforgettable journey: Alaska truly is America’s last frontier.

What Do I Need to Travel to Alaska?

What to Pack for Your Alaskan Adventure Cruise