How To Pattern A Shotgun For Upland Hunting 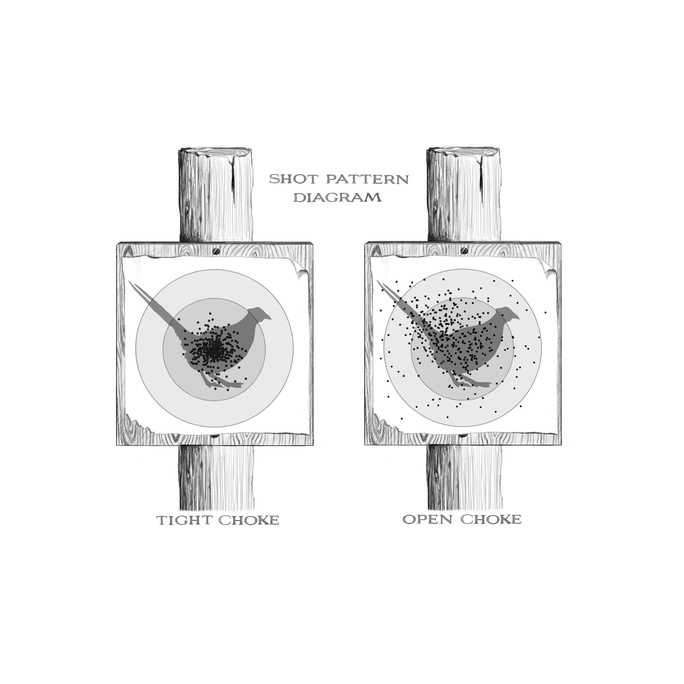 Illustrations by James Daley, offered courtesy of Rizzoli Publishing. Text and diagrams excerpted from The Orvis Guide to Upland Hunting by Reid Bryant.

Shotguns for upland hunting possess either one or two barrels (though in rare cases as many as four can be found on the same gun). The end of the barrel from which the shot exits is known as the muzzle. The muzzle of a shotgun barrel is assigned a constriction or choke based on how rapidly and to what degree the pellets are intended to disperse. The constriction occurs on the inside of the barrel, which, as noted, is known as the bore.

Basic Anatomy Of A Shotgun

A shotgun barrel is basically a big cylinder with a fat end and a skinny end. Working back from the muzzle (skinny) end, we have some degree of constriction (i.e., choke), which gives way to the internal surface of the barrel (bore). Jumping to the end of the barrel opposite the muzzle, a shooter deposits shells into the ‘breech end’ of the barrel, specifically into a recess called the chamber. The chamber is a a 2” to 3.5” segment of the breech portion of the barrel that is slightly larger in diameter than the bore, specifically designed to hold a shot shell. Moving towards the muzzle, the chamber constricts to the bore diameter, and the transition area between the chamber and the bore is called the forcing cone.

The Physics Of Shot Pellet Patterns

Speaking in VERY simplistic terms, a standard twelve gauge upland bird shell might spit out a few hundred lead pellets. As mentioned, pellets in flight occupy a 3-dimensional space called a shot column, which gets bigger (i.e. spreads) with time and distance. If this swarm of pellets were to hit a barn wall, the resulting impact would show up as a roughly circular, 2-dimensional cluster of tiny holes, each representing the place where a piece of shot hit the wall. The cluster of holes in total would represent a dispersal of pellets that is known as a pattern or shot spread. If a bird had been glued to the same barn wall, in the same space that the pattern chose to occupy, the bird too would exhibit lots of little holes. Add dynamic movement, subtract barn wall and glue, and this is how birds are shot on the wing.

Refining Your Wingshooting: The Impact Of Shotgun Choke On Pellet Pattern

Choke determines how dense or how open that shot pattern winds up being, and it can prove a challenging concept to grasp, as it hinges upon physical forces that occur within the barrel. Physically, a choke is just as it sounds: a gradual constriction of the barrel over the terminal two-to-three inches that end in the muzzle. Choke constricts the bore and funnels shot into a concentrated mass as it exits the muzzle. Since choke occurs inside of the bore, it is not visible externally. When a shotgun is fired, that little cloud of lead pellets known as a shot column is contained in the bore as it travels down the barrel, and passes through the choke as it nears the muzzle. The constriction we call choke exerts radial forces on the pellets. These forces push inward on the shot column, packing the pellets even more tightly as they prepare for entry into the big wide world. Once the shot column exits the barrel, those radial forces are offset by natural forces such as air, wind, and gravity. These forces encounter the outer layer of pellets in the column first, battle the radial forces holding those pellets in a cluster, and cause them to zing off at tangents.

This process initiates the widening of the pattern. Once the initial outer layer of pellets is shed, natural forces work on the newly established outer layer, and the process repeats itself with time and distance. In short, greater choke equals greater exertion of radial force, which is harder for the outside forces of nature to overcome, thereby maintaining the density of the shot column. This increase in radial force results in a tighter shot pattern. Hence, pellets forced through a tighter choke remain more tightly grouped for a longer period of time, and retain greater down-range killing potential for that reason.

No constriction whatsoever, known as cylinder choke, provides the smallest exertion of radial force and allows for the most rapid dispersal of shot. In this constriction, or lack thereof, shot sprays from the barrel and spreads quickly into an ever-widening cloud. The greatest plausible constriction, i.e., full choke, exerts maximum radial force on the column and retains the shot in a tight cluster as it travels down range.

Let’s go back to the barn wall. This time, we paint two X’s on the wall several feet apart. From 40 yards, we fire a cylinder-choke barrel at the left-hand X, then, with an identical shell, we fire the full choked barrel at the right-hand X. Upon examination, the left-hand, cylinder choked X is peppered with a wider, more loosely-concentrated shot pattern than the right-hand, full X. In shooting terms, the cylinder-choked barrel produced a more open pattern than the full choked barrel, which produced a very tight pattern. But what does all of this barn shooting actually tell us (other than that the barn will need to be re-sided soon)?

From a hunter’s standpoint, the tighter the choke, the more pellets that will coincide with the bird, at greater range. A big, heavily-feathered bird like a Dakota pheasant, which tends to run and flush ahead of a dog, might present a 30-yard shot at something hard to penetrate (remember the heavily-feathered part?). For a hunter to maximize the likelihood of killing this bird, said hunter might opt for a tighter choke than the one that he or she might choose when shooting a tiny, thin-skinned woodcock at a range of 10 yards. On the contrary, if said hunter shot an open-choked barrel at a tough, fast-departing Sharptail grouse from 35 Montana yards, said hunter might or might not seat a random pellet in that Sharptail’s rump. Said pellet might likely lack the killing power of multiple coincident pellets shot from a tighter-choked barrel. More pellets hitting in concert will do said Sharptail the service of a humane kill, and provide the hunter with a lovely dinner; a single pellet may not. Generally, the bigger, more densely feathered birds, shot in open cover that makes for longer shots, require tighter chokes.

Traditional shotguns are fitted with an integral, or fixed choke, which is machined into the bore. Modern guns, and some retro-fitted classic guns, may have screw-in choke tubes that thread into the muzzle end of the bore, allowing shooters to change the degree of shot constriction dependent on purpose. Choke designations refer to the amount of constriction of the bore diameter, presented for our purposes in inches. This constriction remains fairly constant among gauges.

Shotguns have historically come, and remain available, in double-barreled configurations, with barrels either aligned side-by-side, or over/under. The beauty of two barrels lies in the fact that two chokes are available within one package, and the hunter who misses the first shot with the open choke retains good odds for a longer shot with his or her tighter-choked second shot. From a physics standpoint, this makes good sense; when a quail covey rises underfoot, a solid hit from a full choke barrel, at something like ten yards, would result in little more than a haze of blood and feathers. What’s more, the shot pattern at ten yards would be so tightly concentrated that it would be challenging for anything other than a squarely centered shot to hit the bird. The same shot, taken with a cylinder choke, would allow greater opportunity for a hit due to a larger initial pattern. Moreover, with less density to the pattern, far fewer pellets would impact the bird, thereby retaining some meat. But during said first shot, the remainder of the covey has continued to depart. Birds may now be 25 yards out, requiring and improved cylinder or modified choke to create the same pattern that a cylinder choke created at 10 yards. See what I mean? Two barrels afford two chokes, and oftentimes, greater effect in the field.