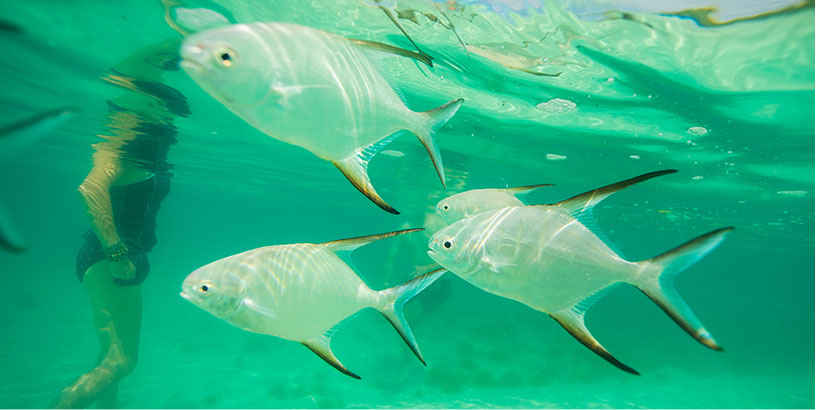 Landing a trophy fish, an exceptionally beautiful fish, or even your first fish is a special occasion that will make you want to share the moment with friends and family. And since a picture says a thousand words, there’s no better way to share your story than with photographs of those remarkable moments you encounter on the water. Here are a few tips on how to take a great photograph of your catch, while keeping the fish safe and healthy, following catch and release guidelines.

When practicing catch and release fishing, the proper handling of a fish is essential to its survival. Taking a photo of a fish almost always adds to the handling time of a fish—unless a friend photographs the fish as you release it. When alone, or if you desire a classic "grip '''n grin" photo (see below), there are a few tips to follow that can help you insure the health of the fish.

Some fish are more susceptible to over handling than others. Because of their dependence on highly oxygenated, cool water, and their fragile skin, Trout are most commonly subjected to dangerous over handling by unaware fly fishers. This blog post from Phil Monahan illustrates proper catch and release handling for trout.

You can learn more about Keepemwet Fishing™ principles and tips at Keepemwet.org.

Some fish species in certain regions are covered by protective regulations which would inherently prevent or limit your ability to photograph a caught fish. For instance, on many water bodies in Montana there are strict regulations on the targeting of Bull Trout and how to handle them if accidentally caught. The Western District of Montana Fish, Wildlife and Parks states "It is legal to photograph your trophy catch; however, it is essential that you minimize or eliminate the need to take the fish out of water." This would be an instance where you would should Keep ‘Em Wet or rely on a friend to take a photo while you release the fish. You should always be aware of your local fishing regulations, so make sure you know before you go.

This is a great option for solo fly fishers, allowing you to keep your fish safely secured, while you snap a quick photo before release. Once the fish is netted and unhooked, lift the net so the fish is just visible above the water and take your photograph.

If you don’t want to remove the fish from the water, but still want to get a photograph of yourself in contact with the fish, a release photo provides the perfect opportunity to combine both. Once you’ve removed the hook from the fish and it’s ready to swim away, snap a photo as you release your grip, or the fish kicks free from the net.

While reeling the fish in or releasing it, have a second person photograph the fish underwater with a waterproof camera.

With modern digital technology there are seemingly endless tools for photographing fish. Here are some of the most common, with some of their pros and cons to help you make a decision on which camera(s) will be most useful to you.

Everyone has them now, and many fly fishers carry their smartphone with them for convenience and safety anyways. To paraphrase an old adage in photography, "the best camera is the one you have on you." So why would you need anything else?

Action cameras have swiftly entered the outdoor world as a must-have accessory for anyone wishing to capture the action as it happens.

With the explosion of smartphones and the drop in price of DSLR cameras, the point and shoot camera has become a less popular tool for many consumers. However, thanks to its small profile and versatile capabilities, it’s still holding strong in pockets, backpacks and fishing vests of outdoor adventurers worldwide.

The granddaddy of consumer cameras, DSLR (digital single lens reflex) cameras basically do everything you need them to. You’ll find 99.99% (a guess for the sake of argument) of professionals using a DSLR today, especially those photographing their fishing adventures for magazines and beyond.

However you choose to photograph your fishing adventures, have fun with it and be sure to keep the fish’s health a priority if practicing catch and release. You learn more each time you fish, and the same is true of snapping fish photos. At some point, you may even feel the desire to photograph more than fish—most likely after already having landed a few that day yourself. Good luck in fishing and photography.

How to Pack Photo Gear for a Trip