Float vs. Wade Fishing In Patagonia 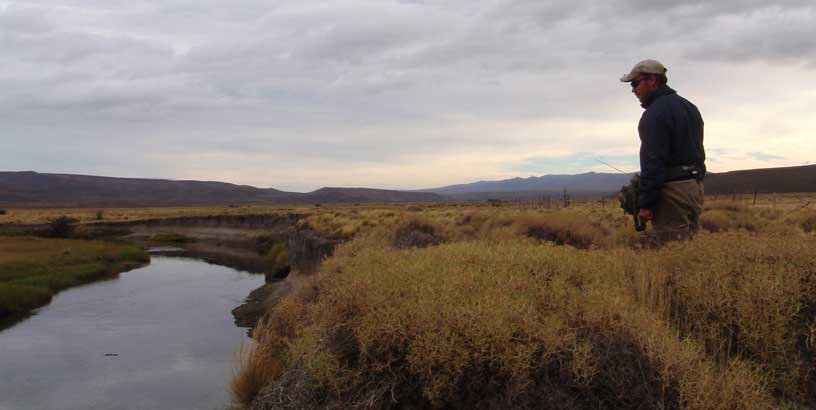 While the Patagonia region of Chile and Argentina draw frequent comparisons to the northern Rockies of the western United States and Canada, a few important differences make a fly fishing trip in South America well worth the voyage. From its colorful culture, to its rocky peaks which hold the pristine lakes and cascading rivers that we all dream about, Patagonia delivers a fly-fishing experience unlike anywhere else on the planet. And whether you decide to plan a float trip or a purely wading trip in Patagonia, an experience of a lifetime surely awaits.

One of the biggest differences between the Patagonia region and the Rockies of North America is a naturally well-regulated runoff. Many of of the most productive fishing rivers in the region flow out of sizeable lakes, which slow the raging runoff torrents and allow silt and debris to settle out of the water before continuing downstream. Are the rivers always perfect? No, heavy rains can cause them to rise and become cloudy, but usually only for a short time. And when it does rain, Patagonia is home to some of the world’s most prolific spring creek fly fishing — areas unaffected by rain runoff due to the filtered groundwater source.

Jeremy Kehrein, Sporting Travel Program Manager here at Orvis explains, “Most of the rivers come from large bodies of waters (lakes) or glaciers, so there is not a runoff season like what we are used to in the US. Chile tends to get ?blown out’ easier than Argentina, but the rivers clear up very quickly due to the fact that most runoff heads to the lakes, then settles into the lakes, and is filtered out once it heads to the rivers.”

The lack of a runoff season means that there’s no real seasonality factored into the wade fishing vs. float fishing decision when visiting Patagonia. Whereas many rivers in the western United States and Canada cannot be waded in late spring and early summer, the rivers of Patagonia remain consistent throughout the fishing season. If it’s big water, plan to float it whether you visit in December or April. And if it’s smaller water, plan to wade, even if it’s early.

While public land continues to expand on both sides of the border in Patagonia, much of the river access remains private. Fortunately, Patagonia is home to a wealth of experienced guides and outfitters, most with exclusive access to miles of private river. The expansive private river access makes it difficult, to near impossible, to access the best fishing without a guide, or without years of personal experience and personal connections of your own. Kehrein describes “do it yourself” (DIY) trips in the region as, “very difficult… due to public access on rivers.”

He suggests, “If it is a river worth fishing, most of the outfitters or guides pay a yearly access fee so they can have sole access. We highly suggest that if you have a limited amount of time to fish in South America that you hire a local guide, outfitter, or lodge to get you access on the best sections of the rivers.”

Hiring a Patagonian guide is easy, and most offer your choice of wade and float fishing wherever you are in Patagonia. Just let them know if you prefer one experience over the other, and they’ll factor it into providing you the best fishing experience possible.

Where To Wade Fish In Patagonia

From pocket water on freestone rivers to grass-lined, gentle spring creeks, wading opportunities abound in Patagonia. Wade fishing isn’t limited to flowing water, however. The lakes, especially the well-oxygenated lakes on the Argentine side, are home to large populations of trophy trout. While accessible by boat, casting from shore is equally productive — just make sure you’re an experienced fly caster in the wind.

With a lack of runoff, wade fishing in Patagonia allows you to take advantage of spring action, without the worry of heavy, off-color water. Kehrein suggests, “In Chile, Magic Waters Patagonia Lodge, Patagonia Baker Lodge, or the Coyhaique region fishes well for lake run rainbows. The spring creeks also fish very well in early season.” And for Argentina, “San Huberto, on the Malleo River is the best wade fishing for early season — November to end of January. Estancia Tecka and Tres Valles, in the Esquel and Rio Pico regions have excellent all season wade fishing opportunities, but it can be very windy in this region from November to the end of January. It still fishes very well but can be challenging for the novice angler.”

Where To Float In Patagonia

The steady flow of water from glaciers, to high elevation lakes, and then into the big rivers below, Patagonia offers hundreds of miles of float fishing opportunities on blue ribbon equivalent rivers throughout the season. While some rivers in western North America get too low in late summer to be effectively (or enjoyably) floated, Patagonia’s float trips are often as good, or better, in the late summer as they are in the spring.

For a late season float trip in Patagonia, Kehrein suggests, “In Chile, Chimalfe in the Yelcho region fishes very well late December to April. Magic Waters and PBL also fish well for float fishing all season long, but every two years — in even years — mid-February starts the Cantaria beetle hatch that the fish love!” And in Argentina he says, “Carrileufu River Lodge is mostly float fishing, with some wade fishing on small spring creeks and rivers, but fishes very well from November to April with many options of very famous trout waters in or near the Parque Los Alerces. The advantage of going here early season is that most of the strong winds are blocked by the Andes. The float fishing at Estancia Tecka is excellent all season, but traveling in February will give you a better chance on missing the strong winds.”

When To Visit Patagonia

What Do I Need To Travel To Patagonia

What To Pack For Your Patagonia Adventure